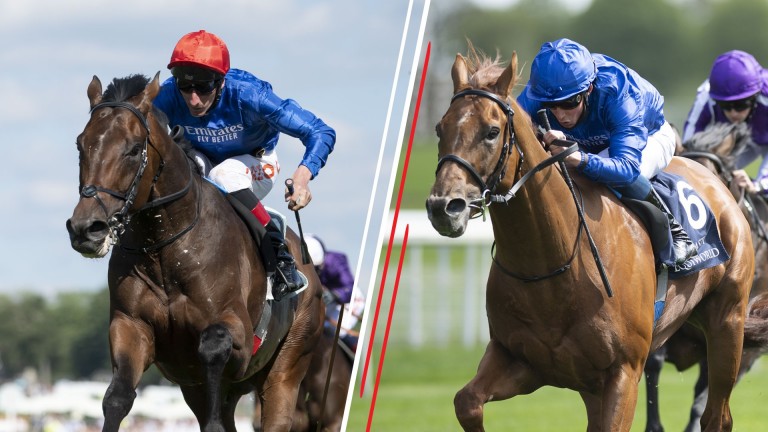 Because of Adayar's enthusiasm and physique tactics will be crucial – he doesn't want to get too far back or stuck in traffic as it can take a while for him to gather his stride. He has also had an infection and it remains to be seen how much that has impacted his preparation.

Hurricane Lane, who Godolphin initially considered their number one, has shown his versatility – including over this course and distance – and is uncomplicated and a confirmed stayer at the trip, but that race would have taken something out of him and no horse has ever done that particular double.

Conversely, he is far better than most who have attempted this feat and Charlie Appleby wouldn't be running him if he hadn't fully recovered from Doncaster.

On balance, with my approach to betting, I'd rather take Hurricane Lane at 13-2 rather than the 3-1 available for Adayar.
Maddy Playle, journalist

'I have to prefer Adayar'

St Leger winners don't have a great record in the Arc. Not that many have tried in recent times but those who did attempt to follow up have fallen well short.

Even the legendary Nijinsky couldn't manage to complete the double  in 1970, and Hurricane Lane has had a busy season, so I have to prefer Adayar, even though he missed his prep in the Niel.

Adayar's got the right profile for a three-year-old colt to win the Arc, but his biggest dangers will be the fillies, in particular Tarnawa, while I hope they run Raabihah if the rain comes this weekend.
James Hill, tipster

'Doyle will be able to put him anywhere'

I have been a big fan of Hurricane Lane since the spring and I was very impressed with him when he came to Longchamp and blew apart the opposition in the Grand Prix de Paris, while he is a handy sort and James Doyle will be able to put him anywhere depending on where the cards fall.

On figures he needs to improve to avenge his Derby defeat to Adayar, but Hurricane Lane's best RPR against his own age group is 1lb superior to Adayar's in three-year-old races.

It could yet be that the imposing Adayar takes a further step forward – in which case he may not be for catching – but I'm persuaded that Hurricane Lane might be the one with more upside.
Scott Burton, France correspondent

FIRST PUBLISHED 6:01PM, SEP 26 2021
I'm persuaded that Hurricane Lane might be the one with more upside

Fury and frustration but also an abundance of smiles on a vintage Champions Day The Miracle of Mulheim: meet Marcel Weiss and Arc hero Torquator Tasso The proper stuff is back, but even fellow jumps fanatics can't ignore the Flat Next up: key quotes as Mishriff and Adayar head a stunning Champion Stakes The stories behind two top riders as they battle for British Flat jockeys' title Adayar v Mishriff: Graeme Rodway crunches the numbers to reveal who is fastest