The Racing Post cover all the major horse racing festivals throughout the year to help you stay ahead of the field. Why not take a look at our Royal Ascot Microsite with the latest tips, odds, races, results and free bets for the royal meeting. 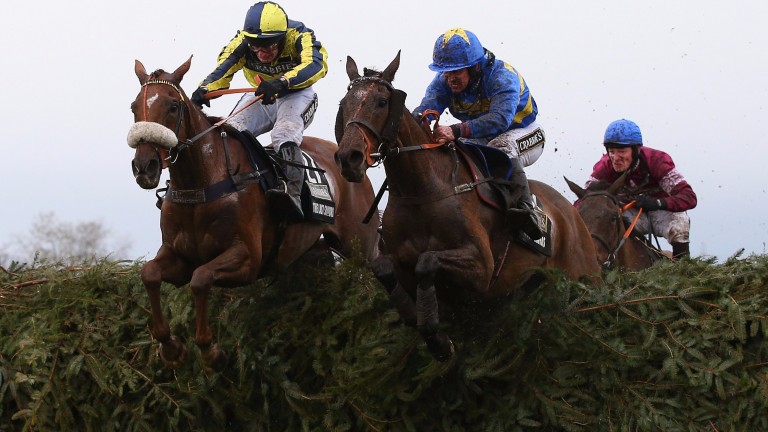 The Grand National is almost upon us and you're probably wondering which horses to bet on? You could pick the prettiest coloured silks, the funniest horse name, or you could follow the Racing Post experts' advice. Follow these eight rules of Grand National betting to increase your chances of winning and always remember to bet responsibly.

Tiger Roll got an outstanding ride by Davy Russell and followed up last year's success in ready fashion. He had a 9lb higher mark this time around, but was actually 8lb ahead of the handicapper courtesy of his romp in the Cross Country at last month's Cheltenham Festival. Russell tracked main-market rival Rathvinden on the first circuit and one could tell six out he was confident. He did well to recover from a bad mistake four from home and once the runner-up hit the last went into a clear lead. As was the case last year, he seemed to idle up the run-in and it's hard to gauge just how much he had up his sleeve at the finish. Magic Of Light the only mare in attendance, ran a mighty race in defeat and would've given the winner a bit more to think about had she not met the last wrong. That wasn't her first notable mistake, but this was her first taste of National fences and the 8yo is fully entitled to come back and have another crack. Rathvinden, a previous 4m National Hunt winner, came back with a belated prep win in the Bobbyjo and was 5lb ahead of the handicapper. He was always up there, but despite being an 11yo this was just his second season as a chaser and he did get caught out at times by these new fences. On softer ground, he could well have emerged on top as the first pair were too speedy from the last and, all considered, he ran an absolute blinder.

About The Grand National

The 2021 Grand National will take place at Aintree Racecourse, Liverpool, on Saturday 10th April 2021 and will be sponsored by Randox Health. It is the most eagerly anticipated Grand National ever after the 2020 running was cancelled due to Covid. The 2019 renewal – broadcast on ITV – was won by Tiger Roll for the second year in a row, trained by Gordon Elliot and ridden by Davy Russell. Tiger Roll’s successive wins in the race made history as the first horse since Red Rum in 1974 to achieve such a feat. Last year, however, the organisers produced a virtual Grand National with effective CGI where the winner was Potters Corner, who also won the Welsh Grand National in 2019.

The Aintree Festival is a three day meeting that begins on Thursday 8th April known as Grand Opening Day followed by Ladies Day on the Friday, and concludes with Grand National day on the Saturday. The Grand National is the longest national hunt race in Britain, run over a marathon trip of 4 miles and 2½ furlongs and is contested by 40 horses. There are a total of 16 fences on the Aintree racecourse, 14 of which are tackled twice during the Grand National totalling 30 obstacles that Grand National hopefuls must navigate. The five most iconic fences of the race are named in part to the heritage of the race; Becher’s Brook, Foinavpn, The Canal Turn, Valentines Brook and the Chair.

The Grand National has seen numerous upsets since it was first run in 1839, when ironically it was won by a horse called Lottery. As recently as 2009, Mon Mome landed odds of 100/1, the same price as Foinavon who, in 1967, benefitted after the rest of the field fell, refused to race, were hampered or brought down at the 23rd fence. In such a wide open race just about every horse has a chance of winning the Grand National. Find out who the experts are backing with our Grand National tips for the best betting advice ahead of time. Once you’ve selected your horse, make sure you get the best price with the Grand National odds comparison grid. If you’re new to betting, why not check the latest Grand National free bets to get a head start on your festival punting.

What is the Grand National?

The Grand National - also known as the Grand National Steeplechase - is the world’s most famous horse race, watched by an estimated 600 million people worldwide, which takes place at Aintree every year in April.

What is the Aintree Festival about?

How to pick the winner of the Grand National?

Everyone has a chance of betting on the winner of the Grand National and almost half of those who bet on the Grand National will choose their horse by its name. Make sure you keep a close eye on our Tips page for expert advice or head over to our Runners & Riders page for our verdicts on the major contenders for the 2021 Grand National.

Click on this link to find out more about what our experts think on how to pick the winner for the Grand National 2021. https://www.racingpost.com/guide-to-racing/grand-national-picking-the-winner/ (content needs updating for 2021)

Where can I watch the Grand National 2021?

The Grand National is on ITV who have the terrestrial television rights for the race, having signed a four-year deal to become the exclusive terrestrial broadcast partner for British racing from 2018. Subscribers to Racing TV will also be able to watch the Grand National.

What date is the Grand National 2021?

The next Grand National will take place on Thursday 10th April 2021.

What time is the Grand National 2021?

Where does the Grand National take place?

Where to stay for the Grand National 2021?

Aintree is just five miles from Liverpool and the bustling city, named a European Capital of Culture in 2008, has a wide range of hotels to suit every budget. However, due to Covid-19 spectators are not expected to be permitted entry to the 2021 Grand National.

How many days is the Grand National?

How many Grand Nationals have there been?

The Grand National was first run in 1839. The 2019 renewal was the 172nd running of the race, as there have been several years when the race has not been run, including during World War II.

How long is the Grand National?

Until recently the Grand National was run over four and a half miles, however the race is now run over just longer than four and a quarter miles after the distance to the first fence was reduced in a bid to improve safety.

Visit our comprehensive guide about the Aintree Racecourse by clicking on the link https://www.racingpost.com/guide-to-racing/aintree-racecourse/

How many fences are there at the Grand National?

There are a total of 30 fences to be jumped in the Grand National. There are 16 fences on the Aintree course, 14 of which the field must tackle twice in two laps of the track (missing out The Chair and Water Jump on the second circuit).

Visit our comprehensive guide about the Aintree Racecourse by clicking on the link https://www.racingpost.com/guide-to-racing/aintree-racecourse/

How much does the winner of the Grand National get?

How much is a Grand National horse worth?

Having a runner in the Grand National is priceless! Owners love to win the race, especially Aintree supremo Trevor Hemmings who has won the race three times - with Hedgehunter in 2005, Ballabriggs in 2011 and Many Clouds in 2015. He often buys one or two horses in the build up to the race every year, often paying hundreds and thousands of pounds. The winner of the Grand National receives £500,000.

How much does the Jockey get for winning the Grand National?

As with all races, as well as a riding fee of around £170, jockeys receive a percentage of any prize money that is won. That figure generally ranges from 8.5 to 9 percent of winning prize-money over jumps, meaning the Grand National winning jockey could receive as much as £45,000.