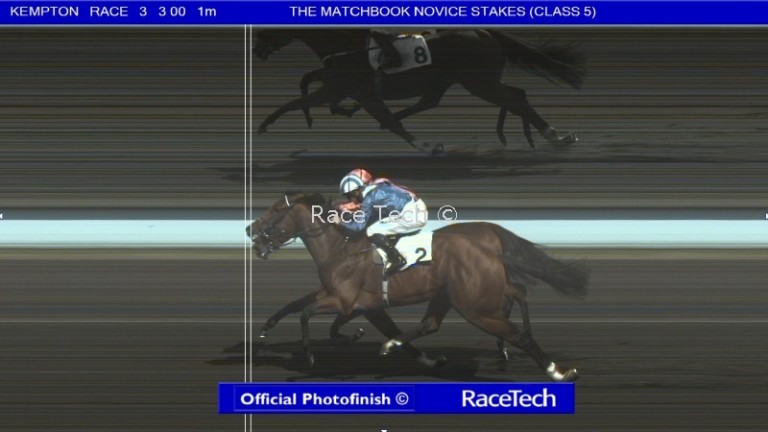 There was another photo-finish blunder at Kempton on Tuesday after winner Albadr was initially placed second behind favourite Loving Glance only for the result to be overturned shortly afterwards.

Judge Emily Jones announced 11-10 chance Loving Glance the narrow winner of the first division of the mile novice stakes, but it was quickly questioned as an optical illusion on the print shown on Racing TV.

Albadr, who drifted to 4-1 after being the morning favourite, wore a distinctive browband that showed it was his head and nose poking out ahead of Loving Glance.

The mistake was picked up before the weighed-in signal, which means bookmakers should not have paid out any winnings on Loving Glance.

However, Betfred and Sky Bet announced they would be paying out on both horses.

A report from the Kempton stewards read: "An inquiry was held to consider the circumstances into the judge announcing the incorrect result of the winner. The judge, steward and the photo-finish operator were interviewed and copies of the photo-finish reviewed.

"Having heard their evidence, the Stewards ordered a report to be forwarded to the Head Office of the British Horseracing Authority for further consideration."

In a statement, the BHA acknowledged the error had been made but pointed to the verification process brought in last summer to prevent erroneous results becoming official.

A BHA spokesman said: “An incorrect provisional result was initially announced in the 3.00 Kempton this afternoon announcing Loving Glance as the winner following a photo-finish.

“Shortly after the provisional result was announced, the error was picked up by the chief steward through the verification procedures put in place to cross-check before the official result is declared. The result was then corrected to announce Albadr as the winner and Loving Glance the runner-up.

“The official result was announced prior to the 'weighed-in' signal, which is the point at which the result becomes official.

“We will now take steps to assess the cause of the incorrect provisional result.”

Kempton has an unenviable reputation as the scene of previous photo-finish mayhem, involving dead-heats that were changed the following week after further inspection.

Judges Jane Stickels, who called the big Saturday Captain Quist Hurdle in 1994 a dead-heat between Large Action and Absalom's Lady, and Dave Smith, who did the same with Extra Noble and Fire Fighting in 2013, were forced to revise their decisions the following week.

In March last year it happened again when judge Felix Wheeler called the wrong result at the track. Oregon Gift, sent off a heavily backed 10-11 favourite for a 1m4f handicap, officially went down by a nose to 8-1 shot Bird For Life, but the result was amended five days later following further consideration of the photo-finish by Wheeler.

In response to that error, the BHA introduced a ‘failsafe’ system whereby all photo-finish decisions would be available for review by a BHA official before the 'weighed in' announcement.

FIRST PUBLISHED 3:45PM, AUG 20 2019
The error was picked up by the chief steward through the verification procedures put in place to cross-check before the official result is declared