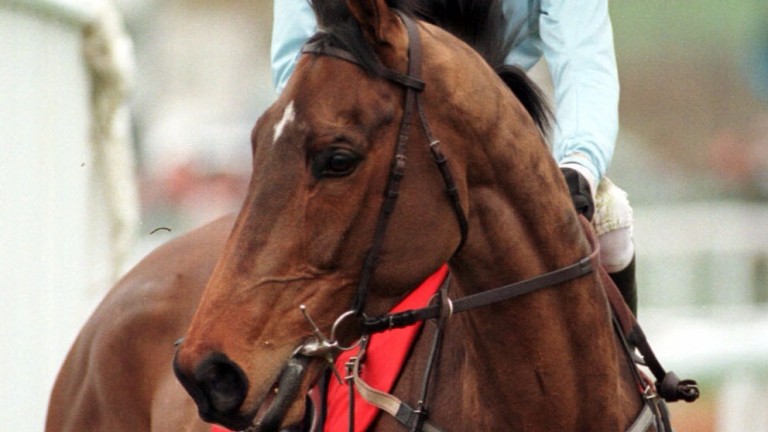 This article was first published in the Racing Post on October 13, 2012

March 17, 1998, and at Cheltenham the gloom was gathering for its nightly conference. Beneath the darkening sky a chill settled on the betting ring, yet it was not just the falling mercury that was sending shivers down the layers' spines. Martin Pipe had the favourite in the last, and the money was coming.

The layers' fortunes that opening day of the festival had been mixed. Istabraq had hammered the unwary with a confident Champion Hurdle victory, and Martin Pipe and his stalwart rider Tony McCoy had plundered their sacks with Arkle winner Champleve. But even the layers who had ducked those winners – and there were few cautious souls in the betting ring back then – could not hope to avoid the torrent of money that was about to break like a tidal wave on their boards.

The gamble was on a horse named Unsinkable Boxer, no spring chicken at nine but in the form of his life, and the trainer was the master Martin Pipe. The race: the usually highly competitive Unicoin Homes Gold Card Handicap Hurdle Final (now the Pertemps Final). It was to end in a redistribution of wealth worthy of Harold Wilson.

Unsinkable Boxer had begun his career four and a half years earlier in a bumper at Mallow racecourse, now Cork. Few who saw the horse with the pugnacious name that October day would have had any cause to suspect he would one day send tens of thousands into raptures. He came home sixth, 26 lengths behind Callisoe Bay, who in 1995 would finish fifth in the Supreme Novices' and never troubled such exalted company again.

The strategy Unsinkable Boxer arrived at Pipe's full of potential and totally unexposed. He improved through his runs and turned up at Cheltenham with enough in hand to convince Pipe he was the greatest certainty ever to walk upon Cheltenham's turf

Money won Across the industry losses were in the millions

What happened next Victory in the Sefton Novices' Hurdle followed at Aintree, but he was pulled up in the next season's Gold Cup and the 2001 Grand National. In 2005, aged 16 and after a four-year absence, he had one last hurrah at Naas. He was last of six finishers

Over the next 12 months Unsinkable Boxer, under the ownership and tutelage of his breeder, the schoolteacher Mary Condon, averaged a run a month, all in bumpers. Condon's bucolic training techniques owed as much to our ancient ancestors as to the modern methods espoused by Martin Pipe. She allowed her horses to roam free with other animals on the farm, shutting the stable door only by night.

In October 1994 Unsinkable Boxer won his first bout at Tipperary and began to look a contender. He started to attract interest from across the Irish Sea, visitors marveling at this burgeoning racehorse wandering loose among a menagerie of farm animals with just a twine rope around his neck.

In December of that year the horse was sold to Jersey-based businessman Paul Green, who two years previously suffered the disappointment of his Gold Cup even-money favourite Carvill's Hill coming home last of five finishers.

Placed under the care of Green's stepson, Nick Walker, the big bay horse had his first run in Britain in the same Supreme Novices' his first conqueror, Callisoe Bay, ran in. Unsinkable Boxer, making his debut over hurdles, finished a distant 11th.

It was the beginning of a troubled period for Unsinkable Boxer. Leg problems and broken blood vessels be devilled the horse over the following two years, during which time he had just three runs and failed to record a first British victory. 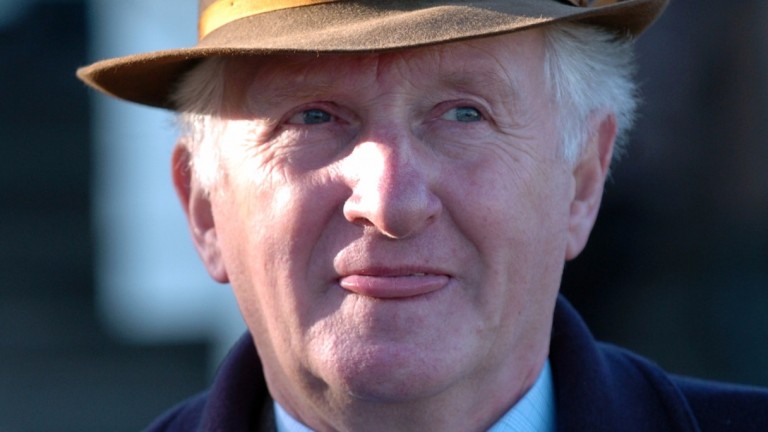 After a difficult start to life in Britain, Unsinkable Boxer was transferred at the beginning of the 1997-98 season to champion trainer Martin Pipe, who saw potential lurking within the horse's bulky frame. Pipe recalls: "Mr Green sent him to me and he was a lovely big, strong horse. He didn't have too much form but he had size and scope.

"We'd had him about three months and we took him to Plumpton. He was going well at home and working well and we were trying to keep him sound. He won at Plumpton, which was very impressive and very good, then he went off after that and won at Fontwell, then again easily at Donny."

Unsinkable Boxer was rated 94 when he won that race at Plumpton on December 7, 1997. By the time he won less than two months later at Doncaster – his last race before Cheltenham – he had progressed 34lb in the eyes of the handicapper.

Along the way he'd also been withdrawn with a vet's certificate on the morning of his Cheltenham qualifier at Warwick, yet remained eligible for the race having been declared overnight.

Heading to Cheltenham and the Gold Card Handicap Hurdle Final, a choice of race confirmed at the last moment as the Coral Cup had also been touted as an option, connections knew the nine-year-old had plenty in hand. "We were very confident," says Pipe. "He'd been working well and improving. We were overconfident."

By the time of the race the Pipe camp had been buoyed and made carefree by the earlier success of Champleve, but still their confidence in the beast was extraordinarily absolute. Tony McCoy, writing in his autobiography, recalls a conversation with Pipe as the pair headed down the chute towards the racecourse: "He [Pipe] looked up at me. I'll never forget it. He looked me straight in the eye without breaking stride, and he lowered his voice. 'This horse,' he said in a measured even tone, 'is the biggest certainty that will ever walk out on to this racecourse'."

In the betting ring the punters too seemed to share Pipe's unshakable confidence. It didn't require a PhD in advanced mathematics to spot a looming Pipe plot and punters latched onto the gamble, forming long queues before the layers. On offer at 9-2 in the morning, they pummelled the price into 5-2.

"Everyone backed Unsinkable Boxer," says layer Geoff Banks, who was working with his father John on the rail. "Everybody wanted to back it to the exclusion of everything else. The whole world was on Unsinkable Boxer. You couldn't avoid it. You had to shut your eyes and go for it."

Across the straight in the silver ring identical scenes were played out. Neil Channing, who has since traded the bookies board for the poker table, remembers a day that had been going well. He had ducked Istabraq, but Unsinkable Boxer's left-right hook was impossible to dodge. "Literally every single bet was for Unsinkable Boxer. £25-£10, £25-£10, £25-£10. We didn't lay big prices, we were never bigger than 3-1, but we didn't lay another horse in the race," he says. 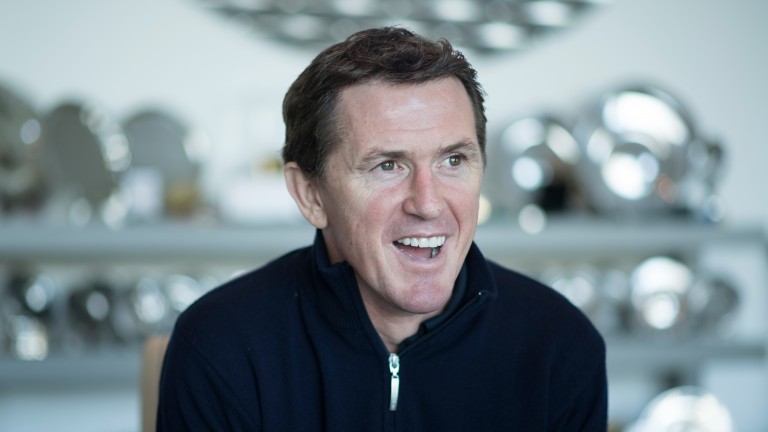 Circling before the start, McCoy was pondering Pipe's words. "All I was thinking was that I'm riding something that Martin Pipe has told me is the greatest certainty that will ever walk out on to this racecourse, so the only way it's going to get beat is if I muck it up."

That, it soon became clear, was not going to happen. McCoy and Unsinkable Boxer cruised through the race as if it were no more than a basic piece of work. With both rider and mount exuding confidence and barely restrained power they sluiced through the field from their early position towards the rear, taking order with the leading group after the third-last.

Carl Llewellyn, riding the 9-2 second favourite and runner-up Tompetoo, recalls the moment Unsinkable thundered past. "Coming down the hill I thought I had a hell of a chance, that I'd take a lot of beating, and this thing came past me just bloody tanking. I looked over and I just thought 'that's that'," he says.

Amid the deafening roars of a jubilant crowd AP turned to the grandstand and received his acclaim. Newspapers and hats were flung in the air like confetti. Only on the rail, recalls Banks, was there silence as the layers contemplated the magnitude of the thrashing they had received.

Over in the silver ring it took Channing a full hour to pay out the hundreds of punters who backed Unsinkable Boxer, while Banks estimated the rails layers alone had lost in the region of £1 million on the race.

Now, 14 years later, what of Pipe's bold assessment that no horse would ever be such a shoo-in as Unsinkable Boxer? McCoy is in no doubt. "He was the biggest certainty that ever walked out on to that racecourse," he says with emphasis. In the gloom of that Cheltenham evening, Unsinkable Boxer really was unsinkable.