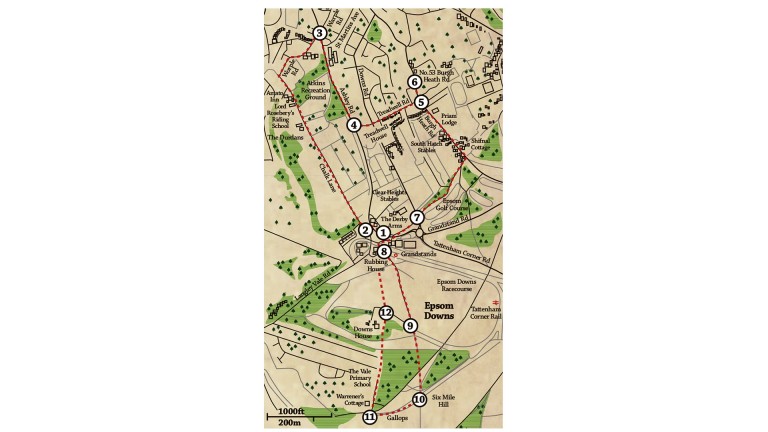 Epsom may no longer be the training powerhouse it once was, but in this walk you get to see the site of the two biggest strings of their day, where prime ministers and royals had their horses in training and where one of the greatest Derby winners of all time was put through his final paces on the morning of his famous win.

Setting off from Clear Heights Stables (see 1 on the map and directions opposite) you head down Chalk Lane (2), a road closed to traffic which cuts through paddocks, with those on the left belonging to The Durdans, formerly the home of Sir Gilbert Heathcote and later Lord Rosebery, the only prime minister to own a Derby winner.

Further down on the left are a large set of ornamental gates. Originally from The Canons at Edgware, the town house of Irish adventurer and owner of Eclipse, Colonel Dennis O'Kelly, the gates were closed when Rosebery's son Neil Primrose left for war in 1914. He was killed in Palestine and the gates have remained closed since.

During World War II Canadian forces were billeted here before D Day, and on the wall by the main gates can be seen the carvings of young men missing their homeland. 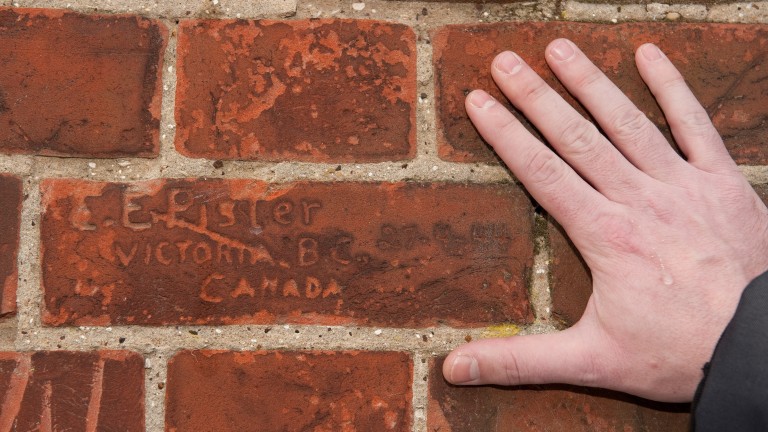 Canadian Army graffiti on the wall of Lord Rosebery's stud in Chalk Lane. They were stationed here during the Second World War
Edward Whitaker

As the lane narrows the site is dominated by Lord Rosebery's Riding School, a Grade II listed building. Rosebery rarely went racing, preferring to watch the development of his young stock at home.

Specifically for this purpose he had this church-like structure containing a raised viewing gallery built.

From The Durdans to the top of Chalk Lane is a 5f uphill climb. In the days before all-weather gallops a trot up Chalk Lane would keep horses on the go when snow covered the Downs, with the overhanging trees either side of the lane providing shelter.

Peter Walwyn recalled in his autobiography, Handy All The Way, that Grundy's exercise on the morning of the Derby was a walk down to The Durdans and a trot back. 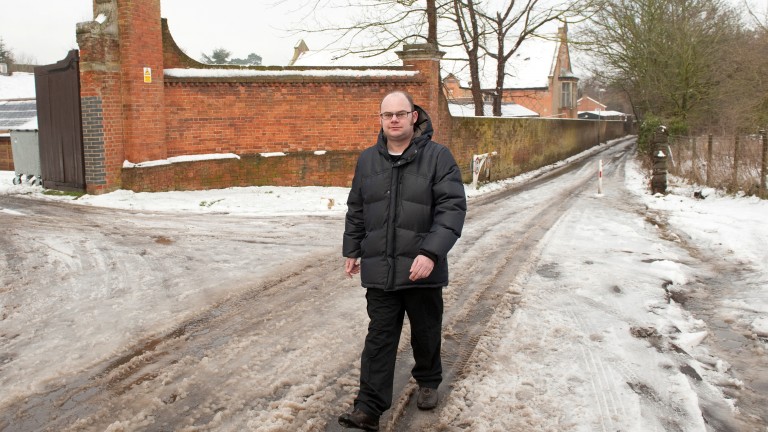 Further down on the left is the Amato Inn. In the past a gypsy boy, with the 'benefit' of his mother's crystal ball, used to chalk the name of the supposed Derby winner on the wall opposite the night before the race. These days the message arrives earlier and appears on the roof of the wishing well in the pub car park.

While The Durdans has been saved as a training establishment, next up is the site of one of the many yards in the town lost to redevelopment.

On the left in Worple Road is a block of three-storey flats called Sandown Lodge which between the wars was the site of racing stables, with boxes hired by Staff Ingham and Harold Wallington.

Heading back up towards the racecourse is Treadwell Road (4) and the cul-de-sac Wootton Close, which marks the home of the remarkable Australian racing family who tasted much success and eventually ensured the future of horseracing in Epsom.

Richard Wootton purchased Treadwell House stables and the adjoining Rifle Butts gallops in 1906. He was champion trainer in 1913, and his son Frank was champion jockey four times before the age of 20.

Despite this feat it was Richard's second son, Stanley, who made the permanent mark on Epsom.

When in 1967 he was given notice to quit the Epsom Downs gallops on expiry of his 40-year lease, Wootton, a successful owner, trainer and renowned gambler, appealed the decision and won. Having been impressed by changes in racing politics, Wootton worked together with then Levy Board chairman Lord George Wigg to permanently resolve the ownership problems on the Downs. Following a court case, Wootton effectively gave the Downs to racing by offering to the Levy Board a 999-year lease at the "rent of a peppercorn if required".

The red-brick Treadwell House and its coach house are still standing, with a plaque recording Stanley Wootton's tenure on the wall of the house. 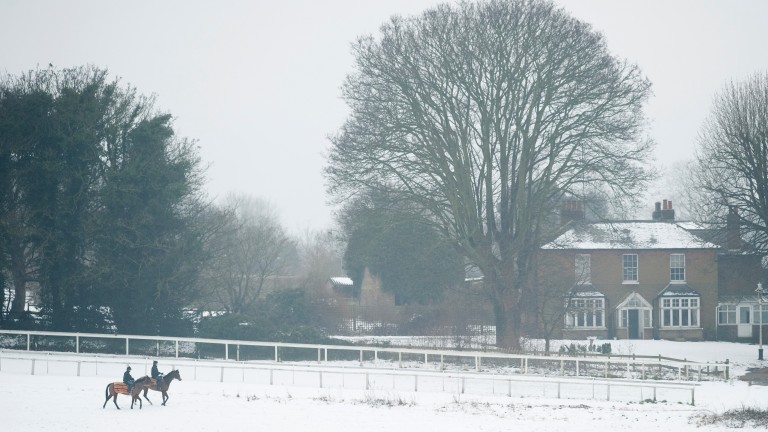 Further along Treadwell Road, Rifle Butts Alley and some Victorian terrace houses indicate what was once the border of the training establishment.

The junction of Burgh Heath Road (5) marks where in the 1950s the two biggest strings in Britain, those of Vic Smyth and Walter Nightingall, were trained.

Mospey, No.53 Burgh Heath Road, (6), was Smyth's house and his main yard. Now Mospey Crescent stands on what was once the paddocks. Two doors away, at 57 Bruce Lodge was where Bill Larkin trained for the writer Edgar Wallace in the 1930s, but it was when Smyth subsequently took over that the yard had its most successful time with his big-race wins including the 1952 1,000 Guineas with Zabara and four Champion Hurdles.

Continuing up Burgh Heath Road you reach another of Smyth's yards, Priam Lodge. In the late 19th century, John Jones and Arthur Nightingall trained the Prince of Wales's jumpers here and the royal feathers stood on the stable arch from then until Tommy Gosling vacated the yard in 1982.

Crossing the road you have South Hatch stables on your right. The timber-framed boxes were built when Scobie Breasley was at South Hatch, and extended when Reg Akehurst trained here. Next to them is the old yard, dating from 1900, with its staff cottage and hostel abutting the road. It was here that Walter Nightingall trained 1943 Derby winner Straight Deal and 1965 2,000 Guineas winner Niksar as well many winners for Sir Winston Churchill, notably Colonist, High Hat and Vienna.

South Hatch house, now a restaurant, was separated from the stables after Breasley sold it, while next door is the site of former Nightingall yards Beech Cottage, and finally the yard now known as Wendover.

Opposite South Hatch house is Shifnal Cottage, formerly the head lad's cottage to South Hatch stables and named after the 1878 Grand National winner who was trained by Walter's grandfather, John Nightingall. Shifnal Cottage was later owned by Stanley Wootton, as was the stables next door, another former Nightingall yard Le Chalet.

Turning right off Burgh Heath Road follow the path adjacent to the golf course and cross Downs Road (7) to the Rubbing House pub (8).

Over on the racecourse the grassland in the centre provides the winter grass gallops, while across the far side are further grass gallops (Sherwoods) and an all-weather sand track, the busiest of the gallops. Following the path through the woods (9) you reach Six Mile Hill.

It was here that Lord Wigg mused over the deal that safeguarded Epsom's racing future: "I looked over that marvellous hill and over the trees on Walton Downs, and there was Headley Church, standing up, tiny against the sky, and I thought, 'Why not for ever?', and by God we have done it." 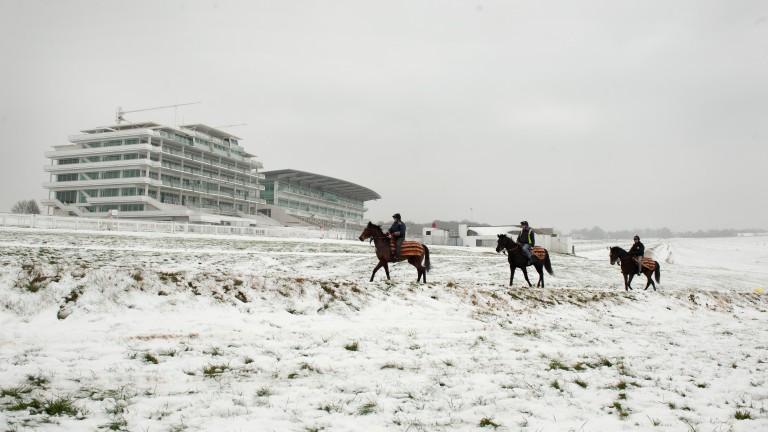 Following the Polytrack gallop back towards the woods (10) you will see two stone pillars. These were the gateposts that marked the entrance to The Warren, reputedly a hunting lodge owned by Charles I. When the Derby was started on Sherwoods gallop, The Warren was used as a saddling enclosure. In an eventful history it was also a stud, a bloodstock sales ring, and 1857 Grand National winner Emigrant was trained there.

Following the footpath down (11), the Warrener's Cottage can be seen set in a section of the wall to the left. To the right is a white metal obelisk, with the arms of the City of London on it. This is a coal post, denoting the point at which tax became payable on coal brought into London.

Not long after this, London's dramatic skyline comes into view as a backdrop to the racecourse but before then you pass Downs House (12), formerly known as Sherwoods Cottage, from where O'Kelly trained the great Eclipse as well as Derby winners Young Eclipse and Serjeant.

In the 19th century Ralph Sherwood sent out Classic winners Amato and Jouvence from here, while the yard has housed big winners since its name change in 1945. Cyril Mitchell trained Sir Peter O'Sullevan's top sprinter Be Friendly and his son Philip's exploits with Running Stag were planned from the stables a furlong and a half up from the Derby start.

1. From the Grandstand, walk towards the racecourse stables and the old parade ring.

2. Head down Chalk Lane and when you pass the Amato pub turn right into Worple Road.

3. When Worple Road joins Ashley Road at the mini-roundabout turn right back up towards the Downs.

4. After a short uphill stretch on Ashley Road, turn left on to Treadwell Road at the War Memorial.

At this point turn left and cross Burgh Heath Road.

After about 100 yards you will come to the former sites of Vic Smyth's and Walter Nightingall's yard.

6. Now turn back and head up Burgh Heath Road.

After passing South Hatch and Wendover Stables on your right, turn right and use the bridle path to head towards the racecourse.

After a couple of minutes the grandstand comes into view.

7. Cross Downs Road, walk past the Derby Arms and cross the road behind the grandstand.

8. Walk down the rubber-tiled horsewalk past the Rubbing House pub and take the road across the Downs.

9. Cross the racecourse and walk across the next grass gallop (Sherwoods) to the all-weather sand track.

Follow the path through the woods and across open land, you will then reach Six Mile Hill.

10. Turn right and with the Polytrack gallop on your left follow it to the end, then follow the footpath into the woods.

Warrener's Cottage will be seen on the left.

11. Follow the path down, crossing the ends of the roads in Langley Vale, then up crossing the sand track again, and following the path across Sherwoods gallop. The woods on the left mark the border of Downs House.

12. Cross the racecourse and follow the footpath across the Downs to the Rubbing House, go past the grandstand and back to your starting point.

How to get there The racecourse is just a few minutes from Epsom town centre on the B290 Epsom Downs Road or just off junction 9 of the M25. During the racing season, AA signs will mark all major approach routes. If you are using satellite navigation, key in the postcode: KT18 5LQ. Alternatively, you can use the AA route planner and select KT18 5LQ as destination.

Parking Street parking is available outside the Derby stables on non-racedays. The Derby Arms and Rubbing House pubs both have car parks.

Distance The walk can be done in one or split into two parts. The walk towards town and around the yards is approximately three miles, with the walk across the course and on to the gallops an additional two.

Difficulty 2 out of 5. First part is mainly on the road although it does have some steep hills in it. The second part is on grassy paths and again encounters plenty of hills.

Points of interest The graves of four Derby winners, a WWII army base, numerous historic racing yards, gallops and downland.