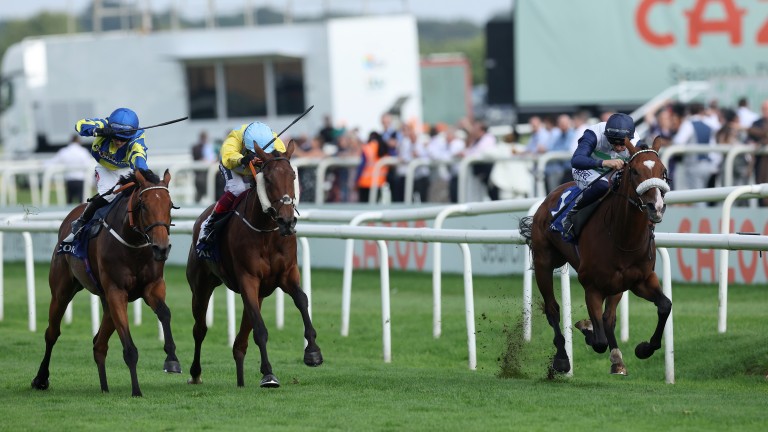 Trueshan finally got his ground but was unable to take advantage as he was beaten at 2-9 in the Coral Doncaster Cup.

The top-rated stayer in training hung left and right under Hollie Doyle and could not catch neck winner Coltrane – and Alan King believes the mudlark's third place in unsuitably quick conditions in the Goodwood Cup in July was to blame.

"He was remembering Goodwood," the trainer said. "He was frightened to let himself down today. The ground is perfect but he's gone right, he's gone left. It was only in the last furlong that Hollie said he let himself go.

"He had a very hard race at Newcastle in the Northumberland Plate and then we ran him on ground that was quicker than he wants at Goodwood. I think it's left its mark."

Trueshan has missed several engagements due to a quick surface and King said: "People have criticised me all the way through about the ground and taking him out but I think you can see why."

He is now unlikely to bid for a repeat of last year's win in the Prix du Cadran as King added: "I've got to speak to the owners but I'd say it's Champions Day at Ascot or nowhere. I'm not going to get him back in two and a half weeks. I hope we get really soft ground, otherwise I might put him away for the winter."

Coltrane was gaining his first success above Listed level on his eighth run of the year and trainer Andrew Balding said: "He's done us proud as he's had a long season and we keep thinking he's going to cry enough, but he's so tough and game.

"We were a bit concerned about the ground because he didn't shine the last time he ran on very slow ground, but he's a star. He's a course-and-distance winner so the Gold Cup at Ascot is an obvious race for him next year, but we'll just enjoy today."

Frankie Dettori held back his trademark flying dismount out of respect for the Queen after he registered his seventh victory in the Coral Champagne Stakes on Chaldean.

Dettori excelled on the Andrew Balding-trained colt when taking the three-runner race by the scruff of the neck, making all by three and a half lengths from Indestructible, with 8-13 shot Silver Knott last home.

The sport's most famous jockey, who formed part of the contingent to observe a two-minute silence before racing following the death of Queen Elizabeth II on Thursday, said: "There's an empty mood in the weighing room and we're carrying on and having to deal with it, but it's still fresh in the memory."

Balding was one of the Queen's trainers, having taken over the reins at Kingsclere from father Ian.

He said: "My grandfather trained for her before that as well and today's result will have lifted the mood a little bit at home. It's a big hole that's been left in everybody's life. We've been privileged to work for her and known her for so long and it's a great loss." 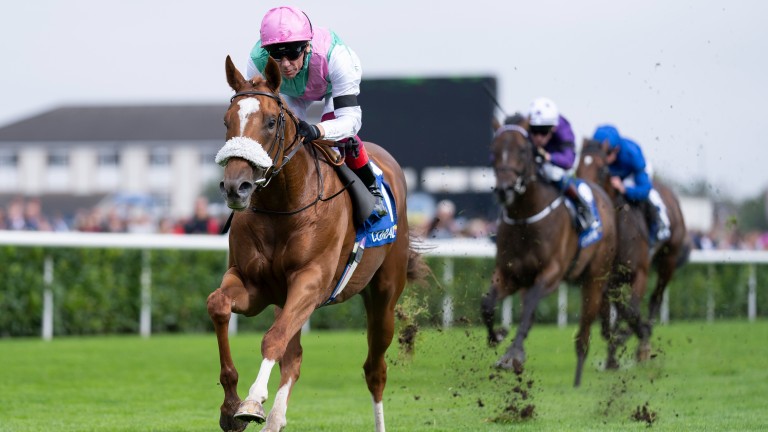 Chaldean, a Juddmonte-owned son of Frankel, was fifth on his debut but has now won three races in a row and was cut to 12-1 (from 16) for next year's 2,000 Guineas by Coral.

Of the race, Dettori said: "I had my own fractions at the beginning but when I asked him to go he gave me a really good feel and hit the line strong. He's not just one-paced, he's got gears and I suggested the Dewhurst next."

Chaldean holds multiple entries, including in the Vertem Futurity Trophy at Doncaster next month, and Balding said plans will be discussed with connections.

Dettori at the double

Dettori kept the celebrations muted after Kinross thrived in his ideal conditions to win the Group 2 Cazoo Park Stakes.

Carrying a penalty for last month's City of York success, the Ralph Beckett-trained five-year-old travelled powerfully before pulling clear and holding off New Energy's late surge by a length.

"Seven furlongs on soft ground is tailor-made for him and I was always confident," said Dettori. "He's a star and doesn't know how to run a bad race."

Kinross will head back to the Qatar Prix de la Foret on Arc day at Longchamp next month, having finished fourth in last year's race.

"He got a bit far back in the Foret last year and Frankie just said, 'We know each other now'," said Beckett. "I'd imagine we'd go straight there. He's not a horse who now needs any work, he's become very straightforward to train. He's really come of age."

The Coral Flying Childers Stakes could well have been a high-class race and it was certainly exciting as Molecomb winner Trillium caught Nunthorpe runner-up The Platinum Queen in the final strides.

The pair pulled more than four lengths clear of the rest and Pat Dobbs was full of praise for the short-head winner.

"She's very quick and very tough, everything you want in a thoroughbred," the jockey said.

"She was actually travelling too well and never really relaxed properly, so it was an even better performance. It's hard to do it on that sort of ground." 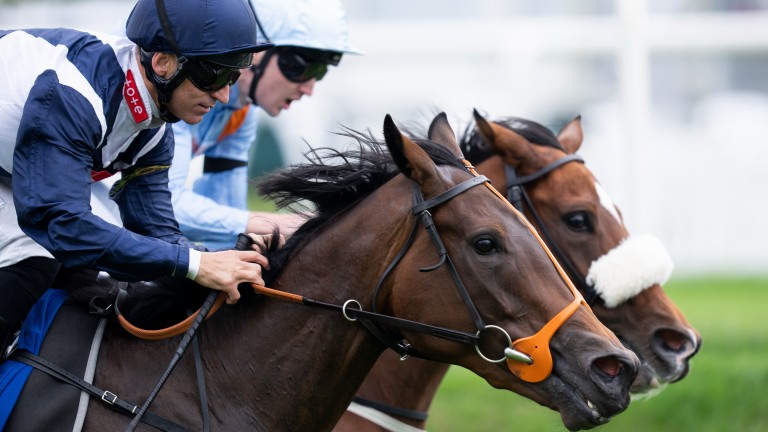 Middleham Park Racing's Tom Palin said of The Platinum Queen: "At five furlongs we'd won a Childers, at five furlongs and three yards we'd lost it. But that was great sport and they've confirmed they're two very nice fillies. I'd love another crack at her, though."

Another crack at older sprinters could also be forthcoming as Palin added: "The Abbaye is something we'll look at if it's not too soft. She's coped with the ground today but it does just blunt her speed.

"On faster ground she'd have been further in front and whether Trillium would have picked her up I don't know, but she'd have had a bigger margin to make up."

Oxted landed the 5½f contest three years ago before going on to strike at Group 1 level in the July Cup the following year, and Teal believes there should be more to come from the 13-2 winner.

"I'm absolutely delighted," the trainer said. "His full-brother Oxted won this in 2019, so July Cup here we come! He doesn't tear up the gallops like his brother and just does enough at home, but there's always improvement in horses like that.

"We were a bit unsure about the ground as, apart from his first run, he's never run on anything worse than good, but he's bred for it and obviously loved it."

FIRST PUBLISHED 1:44PM, SEP 11 2022
People have criticised me all the way through about the ground and taking him out but I think you can see why