Is he a good thing? Punting pointers as First Assignment bids for follow-up 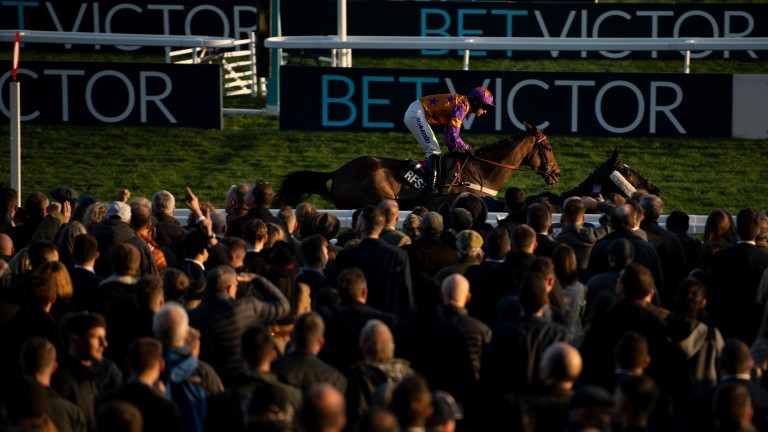 First Assignment is set to go off the hottest favourite for this contest since Grands Crus in 2010, and connections will be hoping their five-year-old can emulate the talented grey.

Grands Crus bolted up in a handicap at the Cheltenham November meeting the weekend before heading to Haydock and proceeded to canter to a ten-length win as the 6-4 favourite.

First Assignment has completed part one of the double, his nine-length victory at Cheltenham last week still masking quite how much better he was than the opposition.

Having kept a close eye on him since, trainer Ian Williams has given the go-ahead for First Assignment to line up at Haydock under a 5lb penalty, meaning he has 8lb in hand.

“He seems to have come out of last week as well as can be expected him to do,” Williams said. “He’s fit, healthy and in good form. It’s a big ask, but we feel he’s in the right place to have a go at it.

“He’s going up in the handicap after what he did at Cheltenham and we’re 8lb well-in, so we’ve had to take that into consideration. That said, he’s only running because we’re happy with him and with how he’s been since he ran last weekend.”

With £100,000 in prize-money up for grabs this race is often packed with runners. But not this year.

Not once in the last decade has there been fewer than ten horses line up, yet a maximum field of eight will compete – potentially fewer if connections of some runners are not happy with the going come race time.

At least those associated with First Assignment will not have to worry about a muddling pace, with Captain Cattistock a proven pace horse

Emma Lavelle, trainer of Paisley Park
He was impressive at Aintree and if he can build on that then he's going to be a nice horse. He's come out of the race really well and this has always been the target. I think he should get the trip and he doesn't want the ground too soft. He raced over three miles at the festival but that was on soft ground, so the going at Haydock should help him. He's got a lot of weight to carry but he's not a little horse.

Paul Nicholls, trainer of Captain Cattistock
It’s a good race for him to go for and he had a lovely prep run at Chepstow. He’s progressed from that and I think he goes there with a solid chance. First Assignment looks the one to beat on what he did last week, but it was only a week ago.

Tom Symonds, trainer of Bobo Mac
What I would really like is some rain for him. I’ll have a look at the ground when I get to Haydock as he wouldn’t want quick ground because I don’t think he performs at his best on it. He’s in good form and his prep run went well. The horse who beat him that day ran well on Thursday. He’s improving and is a horse we’ve always liked, he was just unlucky last year.

Nick Gifford, trainer of Theo’s Charm
He loves it at Haydock. He’s been there four times and he’s never been out of the first three. We’d be very worried about the lack of rain but the race does really suit him. It’s his race every season and every season we target the race with him.