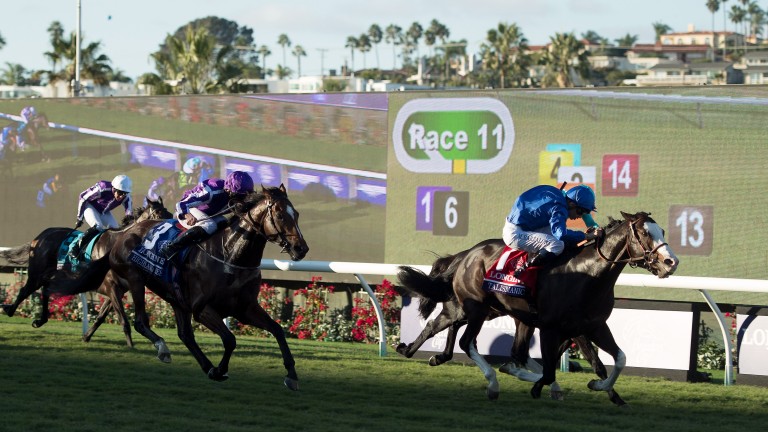 Out of the shadows: the Hong Kong Vase and the Dubai World Cup are among the options being considered for Breeders' Cup Turf winner Talismanic
Edward Whitaker
1 of 1
By Scott Burton 2:31PM, NOV 7 2017

At 14-1 he might not quite rank alongside Andre Fabre's greatest Breeders' Cup coup, 1993 Classic winner Arcangues, but Talismanic overturned some big reputations to vindicate his trainer's faith in him with victory in the $4 million Longines-sponsored Turf.

Given the ideal rail trip by Mickael Barzalona on his first trip to US racing's biggest party, the four-year-old son of Medaglia D'Oro bounced off the fast Del Mar turf, cutting between Beach Patrol and Highland Reel up the straight and easily shrugging off his reputation in Europe as a horse who was just below the best over middle distances.

Fabre may now attempt a dirt conversion with a colt he described as having "speed enough" for a mile and a quarter. The Dubai World Cup – among the ever-dwindling omissions on Fabre's CV – is one of the options under discussion with Talismanic's owner-breeder Sheikh Mohammed.

Fourth to Almanzor in last season's Prix du Jockey Club, Talismanic had notched his only previous Group victory in the 1m6f Prix Maurice de Nieuil on lightning-quick ground at Saint-Cloud, a race in which Melbourne Cup challenger Marmelo was his nearest pursuer.

That fast-ground form clearly put America in mind for Fabre, who was forced by a minor hold-up to abandon a reconnaissance mission to Saratoga for the Sword Dancer Stakes in late August, leaving Talismanic to complete his preparations when third behind Dschingis Secret and stablemate Cloth Of Stars in the Prix Foy.

"But he showed in the Prix Maurice de Nieuil what acceleration he has. He could win a good race over a mile and a quarter, he has got speed enough for that. He's not a true stayer and Saint-Cloud showed he prefers that fast surface." 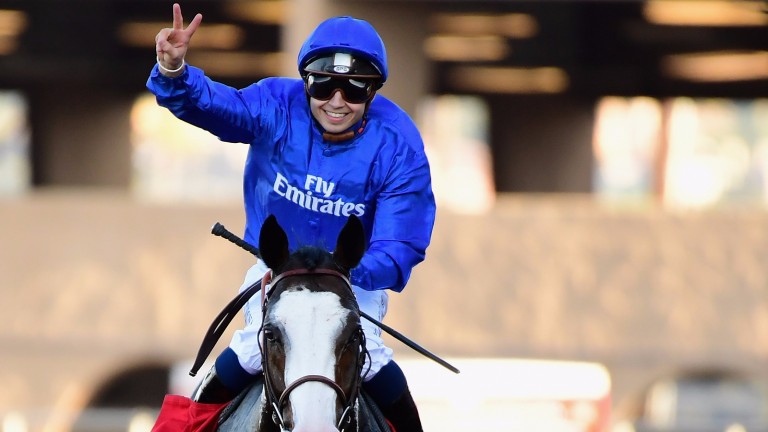 Michael Barzalona salutes Talismanic after landing the Longines Breeders' Cup Turf at Del Mar
Harry How
Fabre's ability to prepare his horses for the big occasion was again brilliantly displayed by the fortunes of his placegetters in the Foy, with Cloth Of Stars going on to be runner-up in the Arc and Talismanic netting a third Breeders' Cup Turf for the trainer, following In The Wings in 1990 and Shirocco in 2005.

Both Talismanic and Cloth Of Stars hold entries in the Hong Kong Vase on December 10 and that race remains under consideration, though the Dubai Carnival appears to be the long-term target for both, with an Arcangues-style switch to the dirt one potentially intriguing piece of the puzzle.

"One option for Talismanic would be to stop for this year, the other is to go to Hong Kong," said Fabre. "We'll see how he comes back. Another option is to prepare him for the Carnival meeting.

"One idea is to keep Cloth Of Stars for the Sheema Classic and this one [Talismanic] for the Dubai World Cup."

With his broad white blaze, Talismanic has long been a favourite of racecourse photographers in France and Fabre revealed the colt is also fondly regarded by Barzalona and the staff at home.

He said: "Everybody loves him and he's such an easy ride on top of that."