The numbers don't add up in Jockey Club's Kempton plan 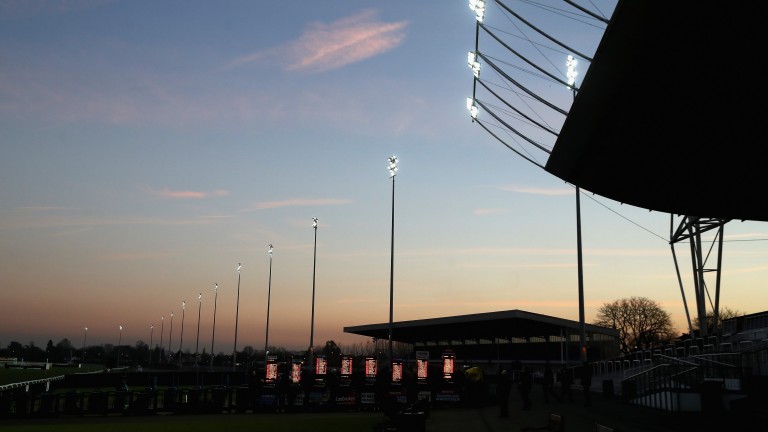 The Jockey Club has achieved that vanishingly rare feat of virtually uniting this most fractious of sports against its plans to close Kempton Park racecourse, but a notable few have embraced the Kempton-less vision of the future.

Mostly, they appear to be convinced by the business case made for selling the racecourse for housing, which the Jockey Club claims would bring in north of £100 million, forming part of a planned £500 million investment in the sport over the next decade.

It is my opinion, argued here last week, that putting a price on Kempton – a profitable, popular racecourse situated in about as desirable a location as the sport could dream of – is both foolish and destructive, trading short-term gain for the loss of a great venue and a key component of the sport's heritage.

Others will disagree. They see not a wrecking ball destroying a cherished racecourse but an opportunity to, as Jockey Club chief executive Simon Bazalgette told me on ITV's The Opening Show last weekend, create "new heritage" in the shape of a renovated Sandown and a new all-weather track at Newmarket. 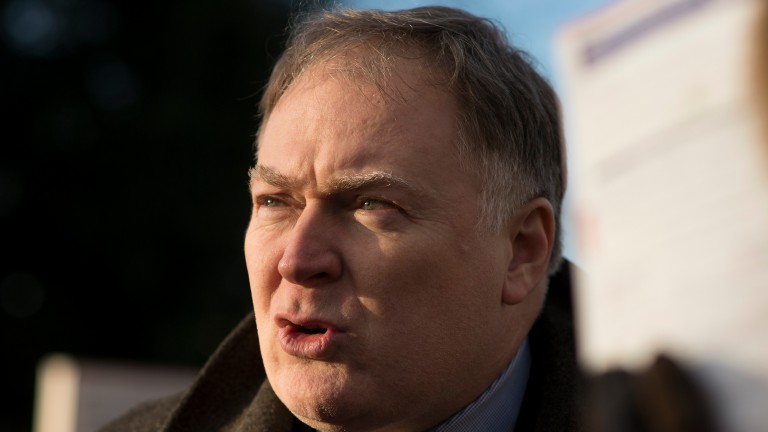 Simon Bazalgette: Jockey Club chief executive is aiming to create "new heritage"
Edward Whitaker
While I can see some logic in that plan, what I cannot fathom is how anyone can offer their support to the Jockey Club on the basis of the flimsy business case it has thus far made for selling Kempton. Details are not just thin on the ground, they would blow away in a strong breeze.

So far the Jockey Club has failed to explain what sort of work would take place at Sandown; it has failed to share detailed plans about the proposed Newmarket all-weather course; and most vitally of all it has failed to account for why it needs to sell a profitable asset in order to carry out what strikes me as a thoroughly unexceptional list of proposed investments.

The headline figure in the Jockey Club's announcement of the plan to put Kempton up for sale was the £500 million proposed investment over the next ten years. Many have approvingly quoted this figure, imagining a bonanza of spending, but this half billion is pure smoke and mirrors. What that figure represents is not an ambitious investment programme but, in fact, little more than a continuation of present operational investment.

As per the Jockey Club's 2015 annual report published last April, the racecourse group has invested £415 million in the sport over the past decade. That figure includes prize-money contributions, maintenance of facilities and racing surfaces, and larger investments. It includes everything from a lick of paint on a bench at Carlisle to the £45 million Princess Royal grandstand at Cheltenham.

Therefore the vast majority of the £500 million the Jockey Club has pledged to invest in racing is, while welcome, not exactly optional. It is the group's bread and butter; the costs of running a large racecourse group.

Even more intriguingly, a figure of £400 million for investment over the next ten years (the total without the hypothetical proceeds of selling Kempton) would actually represent a considerable fall in real-terms spending.

The Jockey Club spent £260m on infrastructure and facilities in the decade to 2015. Identical infrastructure spending over the coming decade, along with prize-money contributions rising by £1m each year (as they did 2015 to 2016, reaching £20.9m), would produce an investment figure over the next ten years of – brace yourself – £515 million. Even subtracting the £45 million paid to build the Princess Royal stand would leave a total almost as large as the proposed half-billion investment.

Suddenly it looks a lot like selling Kempton is not a bonus, not some once-in-a-lifetime transformative windfall for the sport, but perhaps something necessary for the Jockey Club to do little more than stand still.

This comes against a backdrop of an organisation that is, on paper, performing relatively well. Turnover has increased in each of the past seven years, up more than seven per cent year on year in 2015. Attendances grew eight per cent to almost two million. Operating profits edged upwards to £21.9m. The new levy replacement is also set to deliver a considerable boost to racing's balance sheet. All in all, the Jockey Club's finances look robust. This should not be an organisation struggling to maintain investment levels.

There is one red mark in the Jockey Club's finances and it may explain the organisation's enthusiasm to sell Kempton – its considerable debt. The Jockey Club currently owes £115m, mostly to the banks but also £25m to investors who signed up to the racecourse bond issued to help fund the Princess Royal stand (the bond was an enormous success, exceeding its target by almost £10m).

The Jockey Club has insisted that none of the money raised by the sale of Kempton would be used to pay off its debt, but, again, this is smoke and mirrors. If I have a £115 credit card debt – don't laugh – and I raise £100 by selling the family silver, whether I spend that precise £100 on my debt does not change the fact that I must pay it eventually from somewhere. In other words, every pound spent repaying debt is a pound not spent on racing. Has that debt left a hole in the Jockey Club's finances?

Intriguingly, within the 2015 annual report there is information about the Jockey Club's bank loans, on which no capital repayments are due until late 2021. That year is also the earliest point at which the Jockey Club said Kempton could be closed and sold. Coincidence? Perhaps.

Then there is the £100m figure provided by the Jockey Club as the minimum it would hope to generate from the sale of Kempton. As many have pointed out, this seems a dismal amount for such a large tract of prime London real estate. And again, drilling down into the numbers offers little support for the Jockey Club case.

Redrow, the developers involved in the scheme, state in their annual report that their average cost per plot is £68,000, representing 21 per cent of eventual sale price. Extrapolate that number to 3,000 homes at Kempton and the figure we get is £204m. Now consider the gross disparity in house prices in London from the rest of the UK, and consider how much that land might actually be worth.

So this is apparently the Jockey Club's proposal, at least as revealed to racing. A wafer-thin plan to flog Kempton on the cheap, to pay for a relatively unambitious investment programme that is in most respects nothing less than we would expect from the Jockey Club, and with all sorts of questions therefore arising about whether the racecourse group has been as sensible with its assets and finances as it would have us believe.

As Paul Nicholls said this week, the Jockey Club should show us the details if it wants to gain any understanding for its plan to sell Kempton. Perhaps, though, there is good reason it has been so vague.

You've got to feel for Chelmsford. Last week the track announced its grand plans for the future, including a floodlit turf track and an on-site casino, only for the news to be blasted out of the water mere hours later by the Jockey Club revealing it was looking to redevelop Kempton. As if that wasn't bad enough, a Newmarket all-weather track just down the road would also threaten to undermine Chelmsford's appeal to HQ's trainers.

Yet it also meant that we didn't really get a chance to scrutinise the proposals, and I must admit I have my concerns. While a floodlit turf track and new grandstand should, of course, be enthusiastically welcomed, the prospect of an onsite casino is less appetising. 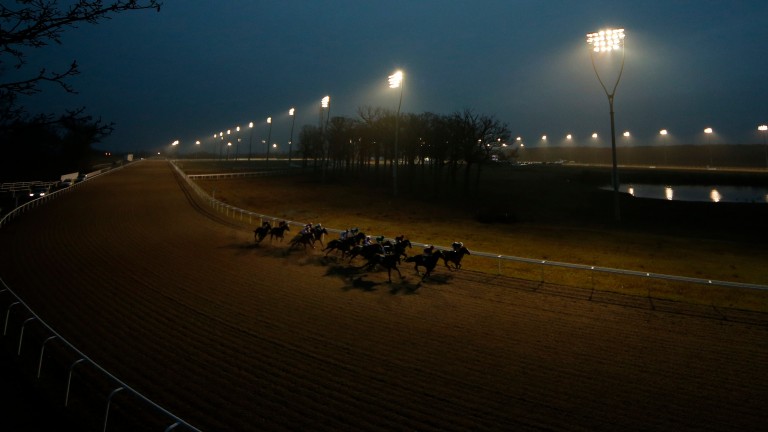 Racing took place under the lights at Chelmsford on Thursday
Alan Crowhurst
Racecourse casinos – or racinos, as they're better known – are a common feature of American racetracks, where vast betting halls awash with the beep and bell of slot machines have helped to pump huge sums into track finances.

Yet in doing so some racecourses have lost their soul, with the casinos subsidising racing of almost no interest to anyone but the horsemen involved. Thousands of patrons sit inside, poking at pokies, barely even aware that outside racing is ongoing. Racing then grows flabby and lazy as it grows used to suckling parasitically on the easy slots money.

As such, racinos might be compared to the rise of gaming machines in betting shops: good for racing's finances, but at what cost?

FIRST PUBLISHED 6:00PM, JAN 19 2017
What I cannot fathom is how anyone can offer their support to the Jockey Club on the basis of the flimsy business case they have thus far made for selling Kempton