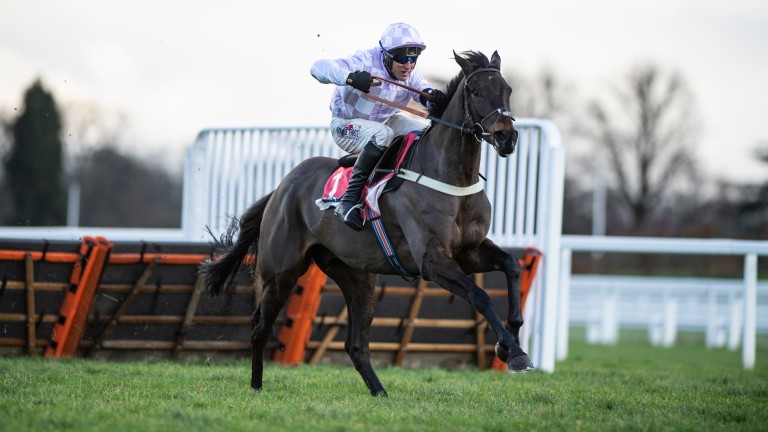 Master Debonair: puts his Cheltenham Festival credentials on the line at Ascot
Edward Whitaker
1 of 1
By Andrew King 6:00PM, FEB 14 2020

Trainers Colin Tizzard and Philip Hobbs will be hoping Ascot passes their planned inspection as Master Debonair and Sporting John are set to put their Cheltenham Festival credentials on the line.

Master Debonair, who holds an entry in the Sky Bet Supreme Novices' Hurdle, showed good form in bumpers last year but has improved no end since a wind operation in the summer and recorded his first Graded success in the Kennel Gate here last time out.

Joe Tizzard, son and assistant trainer to Colin Tizzard, said: “He acts particularly well around Ascot and I don’t think the step up in trip to almost two and a half miles will pose any problems.

“He travels and jumps well and has a nice turn of foot when asked for an effort. I thought he was hugely impressive when winning a Grade 2 at the course back in December, which saw his rating go up to 151.”

When asked about future engagements, he added: “He's only entered in the Supreme at Cheltenham next month and that's the obvious plan looking ahead. He's fresh and well and I'm looking forward to seeing him running again.”

His biggest danger looks like being the unbeaten Sporting John, whose trainer Philip Hobbs has the option of the Supreme or the Ballymore Novices’ Hurdle next month.

Sporting John made a good impression when winning at Exeter on his British debut, claiming the scalp of Harry Senior in the process, and was not hard pressed to follow up under a penalty in December.

Hobbs said: “He won his two novice hurdles extremely well but taking on Master Debonair represents a big step up the ladder. However, I don’t see the ground being a problem and the step up in trip is likely to be in his favour.

“I suppose there's the chance that it turns out to be a falsely-run race with just the four runners, which may not play to his strengths. He will have to pass the examination if he is going to the festival for either the Supreme or the Ballymore.”

Nicky Henderson's maiden Pipesmoker and the Nigel Twiston-Davies-trained Torn And Frayed make up the field.

FIRST PUBLISHED 6:00PM, FEB 14 2020
He acts particularly well around Ascot and I don’t think the step up in trip to almost two and a half miles will pose any problems

Colin Tizzard: 'I had to have five pints before I could ask a girl to dance!' 'I don't think he does pressure' - Bowen steps up as Henderson runners star