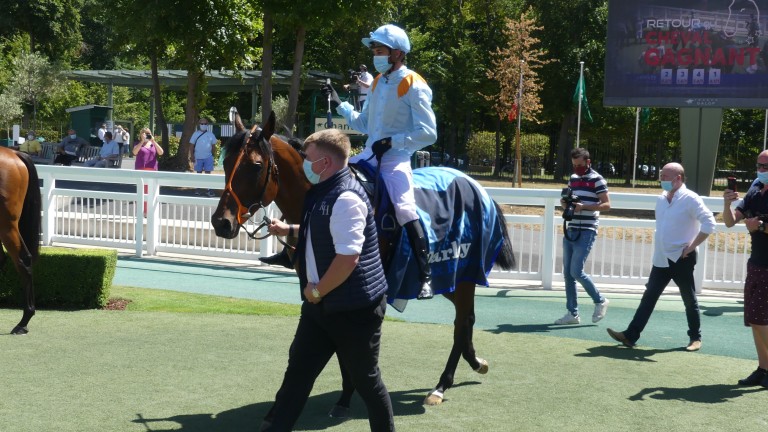 Ventura Tormenta returns with Christophe Soumillon after landing the Prix Robert Papin at the expense of The Lir Jet
Racing Post/Scott Burton
1 of 1
By Scott Burton UPDATED 7:51PM, JUL 19 2020

Fortune favoured the brave as Ventura Tormenta – supplemented for this race on Thursday when it looked likely he would face the winners of both the Norfolk and the Coventry Stakes – got the better of odds-on favourite The Lir Jet in a bobbing finish that could have gone either way.

Richard Hannon and owners Middleham Park Racing deserve plenty of credit for spotting the likelihood of a small field and turning out Ventura Tormenta just eight days after running fifth in the Superlative Stakes over seven furlongs.

"It was a plan to try and draw the stamina out of The Lir Jet and to be forthright from the start," said Middleham Park director of racing, Tim Palin. "It’s worked and to be fair the line has come at the right time, we were just on the right stride.

"To see the opportunity, seize the moment and have the confidence to go and do it, it's very rewarding when a plan like that comes together. I kept watching the racing and the sun was shining.

"I was praying that the ground was getting quicker and quicker. The tactics were executed perfectly by Christophe Soumillon and it’s great to win another Papin after Kool Kompany in 2014."

Watching on from Newbury, Hannon said: "I'd love to have had a go at the Phoenix Stakes, but that closed too early so we can't go there. We supplemented today and, I've got to say, it was Tim Palin's idea – and I half thought he was crazy and we should have come to Newbury for the Rose Bowl Stakes yesterday.

"He's just a really likeable, solid Acclamation colt. He's very good and we might go back for the Morny, although the Middle Park is the main target.

Michael Bell was unable to hide his disappointment, both at the narrowness of the defeat and at what he judged a below-par effort from The Lir Jet.

"Oisin [Murphy] said he wasn't feeling in quite the same form of Ascot but with a bit more luck we'd have still won as he was in front just before and just after.

"It's just annoying as either side of the post he's won, but he clearly hasn't run quite as well as he did at Ascot. We'll go back and reflect but it's hard to know."

Also supplemented and a graduate of claimers, Tiger Tanaka proved a revelation in third, beaten a short head and a neck under Jessica Marcialis.

"It's a shame to be so close to winning and maybe it would have been easier to take if we were well beaten in third. But we've no regrets."

He can make an impact in Group class: three who impressed our judges on Saturday

Members' Club: Even So the best on show in Irish Oaks but the form looks hollow

FIRST PUBLISHED 1:56PM, JUL 19 2020
He's very good and we might go back for the Morny, although the Middle Park is the main target