Which of the Gosden pair might prevail in a competitive running of the Balmoral? 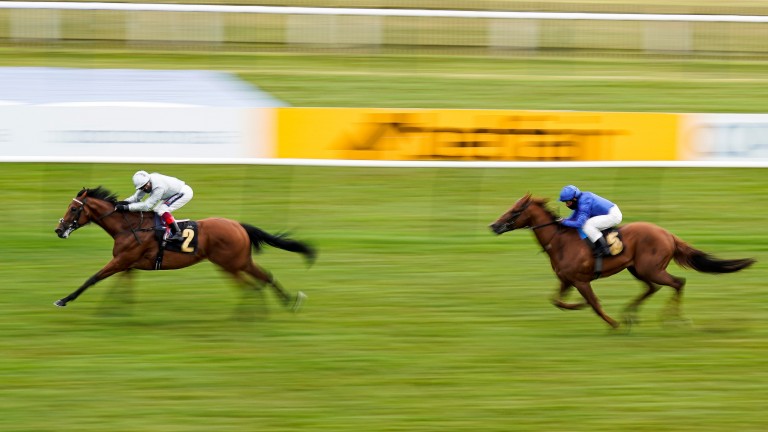 Kingman was almost unmatched on the racecourse, winning seven of his eight starts, and has found no trouble translating his talents to the stallion ranks. Two lightly raced relations of the four-time Group 1 winner stand out in an above-average running of the Balmoral Handicap, but which one is the most likely winner?

The market suggests it could be Sunray Major, a half-brother to Kingman who suffered an injury on his second start last year before bouncing back with two comfortable successes this term, earning him a rating of 102. A mandatory penalty for his recent 7f course victory leaves him officially 1lb well-in and his claims are boosted by the assistance of Frankie Dettori.

There is no question, according to RPRs, that he's ahead of the handicapper given he achieved a mark of 111 without being fully extended last time. But there must be doubt about stall 21 given low draws have dominated this race in recent years and there appeared to be a clear far-side bias on the straight track at the last Ascot meeting.

Stablemate King Leonidas, a son of Kingman, cost 750,000gns as a yearling but was only seen on the track three times since making an impressive winning debut in October 2019. He absolutely thumped the now 97-rated Eastern World, who was sent off favourite for the Lincoln in March, despite giving away 7lb on his second start before disappointing as favourite in the Jersey last summer.

Not many Jersey favourites turn up in a Balmoral Handicap just two starts later but a solid return to action at Newbury last month will have helped his progression ahead of this end-of-season target. Despite Sunray Major appearing the sexier proposition, King Leonidas has an equal amount of upside, is drawn better and is available at a bigger price.

Oisin Murphy, rider of Sir Busker
He deserves to be top weight, he's been a superstar this season and a really consistent horse. His run at Sandown last time was good and he's got a nice low draw. King Leonidas looks the most likely winner to me and I'd worry about Sunray Major over a mile. I think Frankie [Dettori] might have a job getting him home over this trip as he looks a horse with a lot of pace and he might not be drawn well in 21.

Rossa Ryan, rider of Oh This Is Us
He was unlucky not to win last time, he got no run at all. It depends on what horse turns up on the day – if it's the Oh This Is Us we know and he brings his A-game he'll be there with a chance. A shower in the morning would be ideal to keep the ground on the slower side of good.

William Haggas, trainer of Montatham, Aldaary and Johan
Montatham and Johan deserve the weight they've got – they have nothing in hand of their marks. Aldaary is unexposed and loves soft ground; in fact, he'd prefer it even softer. He's very well and was great the day he won at Ascot last time. 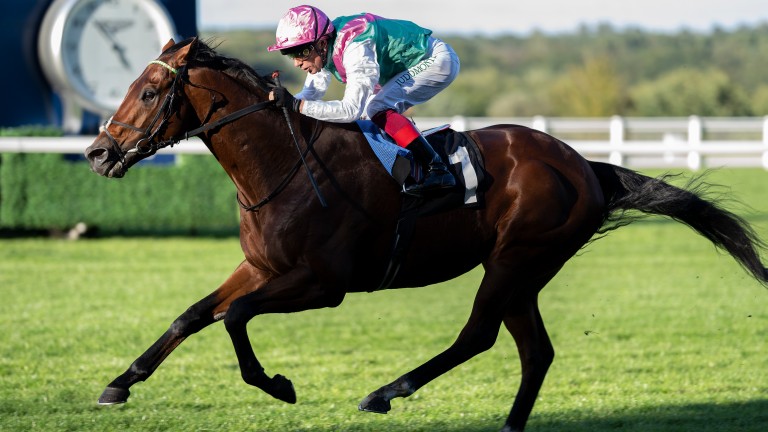 Sunray Major: a winner at Ascot two weeks ago but could be inconvenienced by the draw
Edward Whitaker (racingpost.com/photos)

John Gosden, joint-trainer of Sunray Major, King Leonidas and Magical Morning
I have great concern about the draw for Sunray Major as he's wound up in stall 21 which is right on the stands rail. In my experience, the shadow of the grandstand causes the ground on that part of the track to dry out slower, so you're probably favoured by a low draw and that has gone against him. On the plus side, we've been happy with the horse since he won there last time. King Leonidas comes in as a fresh horse with a good draw in eight and the stiff mile should suit him. Magical Morning was running well in these handicaps all year, he's in good order and can handle some cut in the ground.

David O'Meara, trainer of Rhoscolyn, Escobar and Shelir
Escobar loves the race having won and finished second in it before. Rhoscolyn was a real improver this year, he seems in good form and Shelir is in great order after bolting up at York last time, so at least one or two of them will run well. The ground should be fine for all of them.

Joseph O'Brien, trainer of Raise You
He hasn't run since the Galway festival but we're happy with him. He wouldn't mind a bit of juice in the ground. This is obviously a competitive race but we're hoping he can run well from a high draw, which I think could be a positive.

Ed Walker, trainer of Matthew Flinders
He's talented, if a little inconsistent, and could run a big race. He's had a few goes in these big Ascot handicaps, which really ought to suit, and things have never gone right, so perhaps he's due a change of luck.
Reporting by Sam Hendry

FIRST PUBLISHED 6:00PM, OCT 15 2021
I have great concern about the draw for Sunray Major as you're probably favoured by a low draw

'We thought she'd done enough' - Group 1 winner Loving Dream retired Former jockey and John Gosden work rider Maurizio Vargiu dies at the age of 48 'There'll be no excuses' - Jonjo O'Neill on hot favourite Soaring Glory 'He is part of his story - it's a tragedy he won't be able to ride him' The Buzz horse: is the Cesarewitch winner able to follow up in Ascot Grade 2?