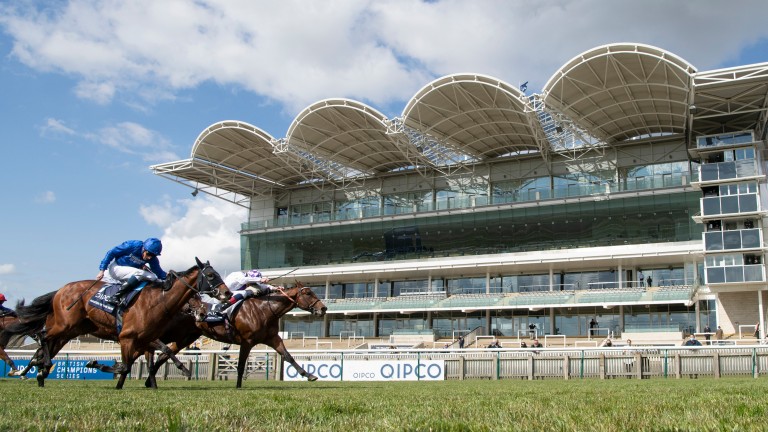 Poetic Flare (Kevin Manning, white) beats Master Of The Seas in a photo to win the Qipco 2,000 Guineas for trainer Jim Bolger
Edward Whitaker (racingpost.com/photos)
1 of 1
By Peter Scargill UPDATED 7:41PM, MAY 1 2021

Jim Bolger hailed Poetic Flare as “the most complete racehorse I’ve ever had”, with the 79-year-old trainer in ebullient mood after the homebred's short-head success in the Qipco 2,000 Guineas at Newmarket.

Rarely shy with his opinions, especially when it comes to his horses, Bolger was in rip-roaring order when speaking from his County Carlow home after Poetic Flare emulated his sire Dawn Approach by claiming victory in the first Classic of the season at 16-1.

The triumph was also a family affair as Poetic Flare is owned by Bolger's wife Jackie and was ridden by his 54-year-old son-in-law Kevin Manning, who became the oldest jockey to win a British Classic since Lester Piggott landed the 2,000 Guineas on Rodrigo De Triano in 1992 at the age of 56.

“He’s the most complete racehorse I’ve ever had,” said Bolger, whose past champions have included the likes of 2008 Derby winner New Approach, Teofilo, Finsceal Beo, Alexander Goldrun and St Jovite. “He’s the complete package — you couldn’t find a fault with him. If he was sent to a new trainer in the morning he’d just pick it up from there.”

Poetic Flare had shown his ability right from the start of his career when winning on the opening day of the Irish Flat season last year before the combination of the Covid-19 shutdown of racing and the horse growing kept him off the course until the Dewhurst Stakes.

While that race did not go to plan for Poetic Flare, he landed the Killavullan Stakes a week later and returned with victory in the 2,000 Guineas Trial at Leopardstown last month. That performance was enough to give him the nod over stablemate Mac Swiney, last year’s Vertem Futurity winner and leading Cazoo Derby contender, when it came to who got to line up at Newmarket, albeit only just.

“I rode the pair of them separately on the grass three weeks ago and they both worked brilliantly,” Manning said. “Jim asked me if they both ran at Newmarket which one would I ride, and I said I really didn’t know – that’s how well they were both going.

“We got the choice right and Jim doesn’t tend to leave it behind when he has a chance to win one of these races.” 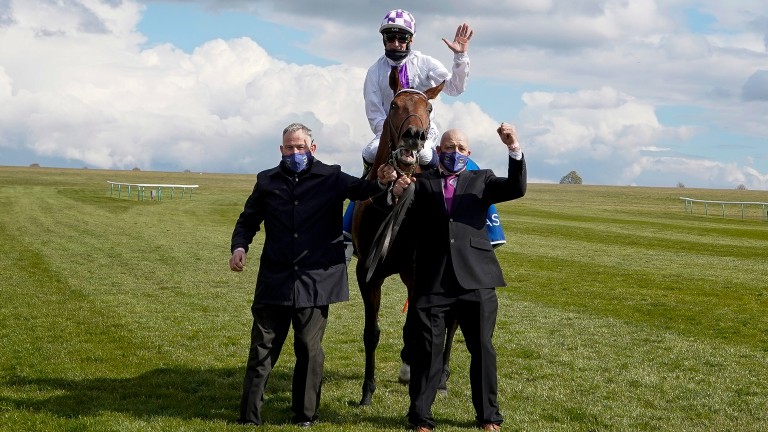 Nevertheless, it looked as though things had gone askew from the stalls with Poetic Flare jumping smartly and appearing to overrace for Manning, who was winning his second 2,000 Guineas after partnering Dawn Approach to victory in 2013.

Always prominently placed as a result, Poetic Flare was committed running into the Dip, where he reeled in pacemaker Naval Crown and set about a head-to-head clash with Craven Stakes winner Master Of The Seas, who had made his challenge on the far side of the course.

The two colts went at it stride-for-stride in the closing stages with neither giving an inch as they flashed past the post together, with Lucky Vega sandwiched between the two but destined for third. The photo would confirm it was Poetic Flare’s Classic by a short head.

“I did think I’d won even though it was close – I’d have been very disappointed if it had been called against me,” Manning said. “He came out of the gates quick and it caught me a little off guard and it took me a couple of furlongs to get into a rhythm. I never felt he was overdoing it, and it wasn’t as bad as perhaps it looked.

“When he quickened up I thought I had put it to bed, but he was idling in the last five or six strides and coming back under me a bit. It’s just great to win – you’re hungry for these races, they’re the ones you want to win and what you work hard every day for.

“We always thought he was smart and he’s the sort to keep improving.” 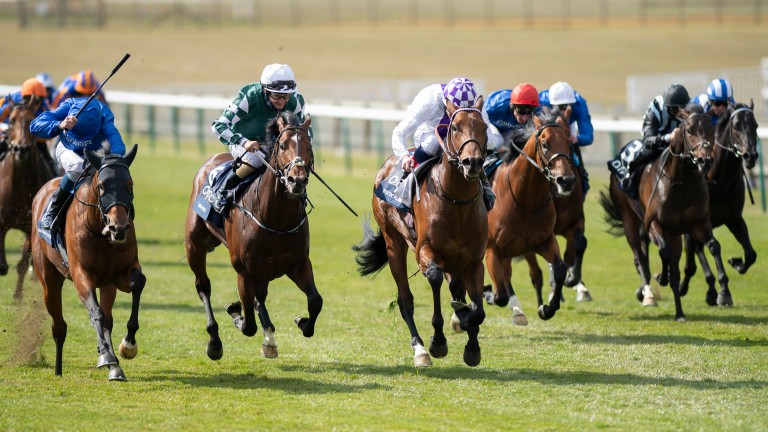 Poetic Flare was slashed to 7-2 (from 16) for the St James’s Palace Stakes at Royal Ascot, but could take in the Tattersalls Irish 2,000 Guineas beforehand.

The Curragh Classic on May 22 could see him face stablemate Mac Swiney, who could line up in that race or next Sunday's Derrinstown Stud Stakes prior to a shot at the Derby next month.

As he laid out his bold and ambitious plans, confidence and excitement oozed from Bolger, who is showing no signs of dimmed enthusiasm or joy from racing his horses despite closing in on his 80th birthday.

“We can’t separate the two of them in our minds and you have to have belief in what you do,” the trainer said. “I’d be happy to stay at a mile with Poetic Flare, and anything can happen for him from here. He’s getting the experience as well and he’s never had to fight to win a race before, so he’ll have benefited from that outing.

Lee Mottershead: words of wit and wisdom from Bolger as Poetic Flare highlights the genius of Jim (Members' Club)

FIRST PUBLISHED 3:51PM, MAY 1 2021
We got the choice right and Jim doesn’t tend to leave it behind when he has a chance to win one of these races