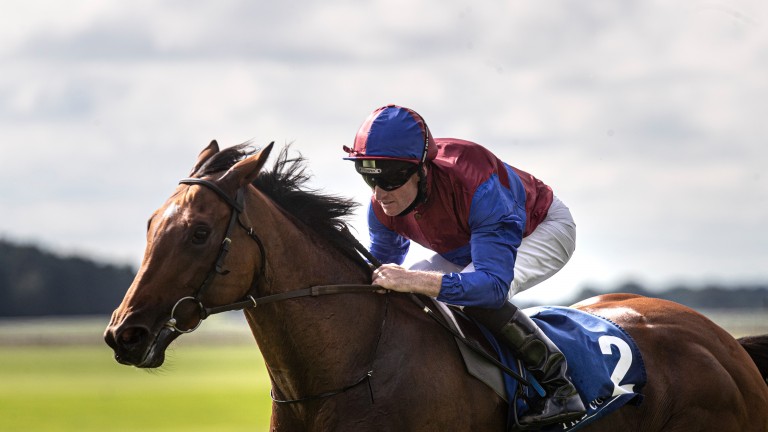 The Group 1, which used to be known as the Racing Post Trophy, has a rich history and the last four winners– Saxon Warrior, Magna Grecia, Kameko and Mac Swiney– have gone on to Classic glory at three the following season.

Aidan O'Brien, aiming to equal Sir Henry Cecil's record haul of ten victories in the race, saddles exciting ante-post favourite Luxembourg, who is two from two and was last seen recording an easy win in the Beresford Stakes.

The son of Camelot is held in the highest regard at Ballydoyle, which has yet to win a juvenile Group 1 with a colt this term, but faces a classy rival in the Mark Johnston-trained Royal Patronage, who denied the exciting Coroebus in the Royal Lodge recently.

Bayside Boy, a course winner in the Champagne Stakes at the St Leger meeting, is another in the mix after his third in the Dewhurst last time with a field of eight declared.

Aidan O'Brien has used the Vertem Futurity as the launchpad for some of his Classic stars, most notably Camelot, Saxon Warrior and Magna Grecia in recent years, and plenty of eyes will be on Luxembourg, an unbeaten son of Camelot who currently holds sway in the betting on next year's Cazoo Derby.

The good-looking colt was bred by Ben Sangster and cost a relatively modest 150,000gns from Tattersalls Book 1 when selling to MV Magnier, but it is on the track where he has done plenty of talking. A Killarney maiden winner in July, he was not seen again until the Beresford Stakes last month – another contest O'Brien has farmed – when he made a big impression with a near five-length win.

Perhaps it has been a case of style over substance thus far but he is bred to improve, being by a stamina source in Camelot – a son of Montjeu who can also produce a backend Group 1-winning juvenile, as evidenced by Criterium de Saint-Cloud scorer Wonderment. His dam Attire, by Danehill Dancer, has already produced Mooresbridge Stakes winner Leo De Fury and the Listed-placed two-year-old Sense Of Style.

Royal Patronage'swins in the Acomb and Royal Lodge Stakes could hardly have worked out better.

The Emma Capon Bloodstock-bred son of Wootton Bassett – who cost 62,000gns from Book 1 – has seen his form boosted at almost every stage, with Acomb third Dubawi Legend finishing second in the Dewhurst and Royal Lodge runner-up Coroebus winning the Autumn Stakes.

A workmanlike and likeable sort trained by Mark Johnston, Royal Patronage is another who has the makings of a top-class three-year-old. His dam, the Dalakhani mare Shaloushka, was a winner from 1m2f to 1m4f in France and is closely related to Irish Derby third Shalapour. They are from the family of dual Derby hero Shahrastani.

O'Brien's other four entries include Churchill colt Howth, who would need to find plenty of improvement at this level, Champions Juvenile Stakes second Stone Age, a maiden son of Galileo and from the family of French Oaks heroine Bright Sky, and Aikhal, another by Galileo and out of a Group 3-winning Fastnet Rock half-sister to Irish Derby winner Latrobe and Oaks second Pink Dogwood.

Dewhurst third Bayside Boy would be of interest based on pedigree were he to turn out quickly. The Champagne Stakes scorer is by rising sire New Bay – a French Derby-winning son of Dubawi and the Zamindar mare Cinnamon Bay – and is a half-brother to dual Huxley Stakes winner Forest Ranger. Bayside Boy is out of 1m1½f Listed scorer Alava.

Prix Jean-Luc Lagardere winner Angel Bleu, despite being out of a predominantly speed sire in Dark Angel, is out of a full-sister to top-class middle-distance performer Highland Reel and the high-class Idaho.
Kitty Trice, Racing Post bloodstock reporter

FIRST PUBLISHED 10:56AM, OCT 21 2021
Bayside Boy, a course winner in the Champagne Stakes at the St Leger meeting, is another in the mix after his third in the Dewhurst last time