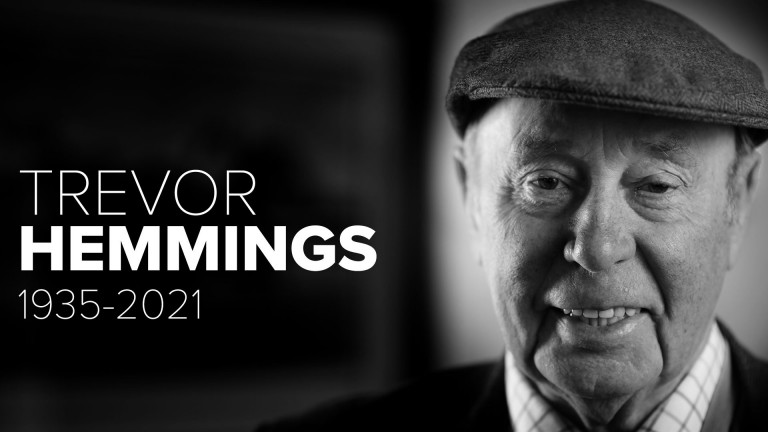 Trevor Hemmings, who died on Monday aged 86, was a champion owner who had a record-equalling three Grand National winners – Hedgehunter, Ballabriggs and the ill-fated champion Many Clouds.

From working-class Lancashire lad to billionaire tycoon and friend of the royals, he made a fortune as a builder, and amassed a property and leisure empire that at various times included racecourses, Pontins holiday camps, Blackpool Tower and Preston North End FC.

Trevor James Hemmings was born on June 11, 1935, in Woolwich, south-east London, near the Royal Arsenal where his father was a munitions worker.

During the Blitz the family was relocated to Leyland in Lancashire, where he dropped his Cockney accent in favour of the local speech.

After leaving school at 15 he became an apprentice bricklayer and studied business at night school. He was still in his early twenties when setting up his own business as a housebuilder with, as he later claimed, capital of only £12.

He soon prospered and in the late 1960s, while building the Pontins holiday camp in Southport, became friends with Fred Pontin, who went on to own Specify, the 1971 Grand National winner.

That was Hemmings' introduction to racing, and the Grand National was always his main target when he eventually owned racehorses himself.

He sold his business to Pontin and became his right-hand man and a director of the company until it was sold to Coral in 1978; he owned a controlling interest in it at various times from 1987.

His main holding company was Northern Trust and that was also the name of the first winner he owned, at Bath in 1985. The colt was trained by Charlie Nelson.

He soon concentrated on jumpers and his first runner in the Grand National was the Stan Mellor-trained Rubika, who finished 14th in 1992.

His first regular runner in the race was The Last Fling (trained by Sue Smith), who came seventh in 2000 but suffered a fatal fall after leading for most of the way in 2002.

The horse who fulfilled the owner's racing dream was Hedgehunter, who in 2004 won the Thyestes Chase and, having made most of the running in the Grand National, was still third when falling at the final fence.

In the 2005 Grand National, starting favourite under 11st 1lb (although carrying the second colours), the Willie Mullins-trained gelding was left in the lead at second Becher's and forged clear under Ruby Walsh to triumph by 14 lengths from Royal Auclair.

Hemmings himself had been involved in the sponsorship deal for that John Smith's Grand National. The John Smith's brand was owned by Scottish & Newcastle Breweries, in which he held a large shareholding after it had bought Pontins from him (he later bought it back).

Hedgehunter never won again, but his best form was yet to come and in early 2006 he came second in three consecutive races - the Irish Hennessy (to Beef Or Salmon), Cheltenham Gold Cup (to War Of Attrition) and Grand National.

At Aintree, starting joint-favourite under top weight of 11st 12lb, Hedgehunter was headed by Numbersixvalverde at the last and beaten six lengths. He was unplaced on his two subsequent Grand National starts. 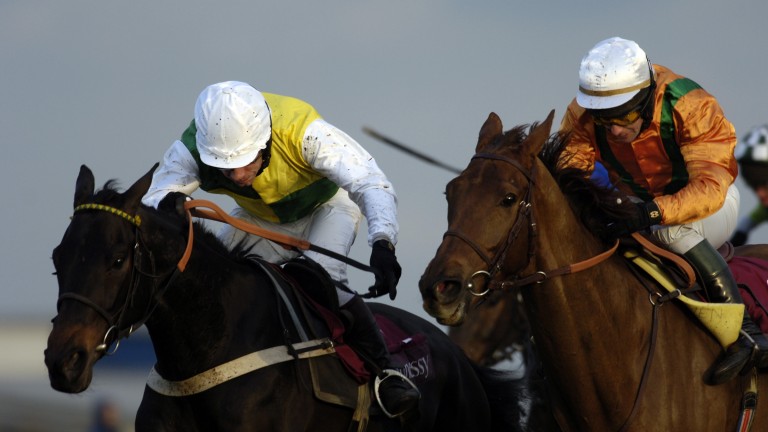 Trabolgan never ran in the Grand National and nor did his next star, Albertas Run, who won three times at the Cheltenham Festival starting in the Royal & SunAlliance Chase in 2008.

In the 2008-09 season Albertas Run, trained by Jonjo O'Neill, put up the best performance of his career when eight lengths second to Kauto Star in the King George VI Chase, but failed to stay in the Gold Cup.

At the 2010 Cheltenham Festival he ran in the more suitable 2m5f Ryanair Chase and won decisively, and he followed up in the Melling Chase at Aintree.

Albertas Run attempted the same double in 2011, winning the Ryanair and coming second to Master Minded in the Melling. He only just failed to complete a Ryanair hat-trick in 2012.

Never more than a handicapper, Ballabriggs won the Fulke Walwyn Kim Muir Chase at Cheltenham in 2010, and in the 2011 Grand National, carrying 11st, he led for nearly all of the second circuit and kept on under Jason Maguire to triumph by two and a quarter lengths from Oscar Time. That clinched the owners' championship for Hemmings.

Many Clouds, trained by Oliver Sherwood and ridden in all his races by Leighton Aspell, was the best horse he ever owned, despite never winning a Grade 1 race. 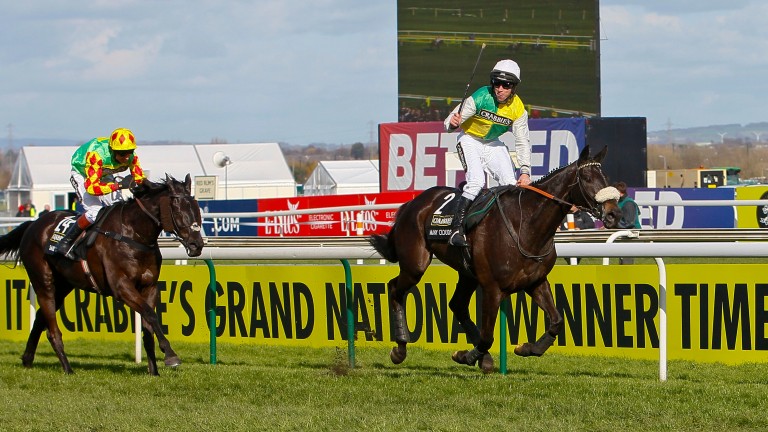 Leighton Aspell celebrates as Many Clouds beats Saint Are in the 2015 Grand National
Mark Cranham (racingpost.com/photos)

As a second-season chaser in 2014-15 the gelding won the Hennessy Gold Cup under 11st 6lb, came sixth to Coneygree in the Cheltenham Gold Cup, and became the first Hennessy winner to triumph in the Grand National.

In the 2015 Grand National, Many Clouds was left in the lead five out and stayed on to beat Saint Are by a length and three-quarters. He carried more weight (11st 9lb) to victory in the race than any other horse since Red Rum.

In January 2017, in the Grade 2 BetBright Trial Cotswold Chase at Cheltenham – a race he had won as the BetBright Cup two years before – Many Clouds was not expected to beat Thistlecrack, a novice who had just won the King George VI Chase. He led four out, and although his rival drew upsides in a sustained duel, the battle-hardened warrior hit back to prevail by a head.

Sadly, only moments later he collapsed and died of a severe pulmonary haemorrhage, victim of his own indomitable will to win. The racing world, including his owner (who was not at Cheltenham), was stunned by the death of a public favourite who embodied the spirit of the jumping game.

Hemmings bought the Paul Nicholls-trained Vicente as a substitute runner in that year's Grand National. He fell at the first but scored a repeat victory in the Scottish Grand National.

At the end of the season Many Clouds was surprisingly rated the champion staying chaser in the official Anglo-Irish Jumps Classifications. The Grade 2 Many Clouds Chase is run at Aintree and the owner won it with Lake View Lad last December.

Cloth Cap, named after his usual headwear and trained by Jonjo O'Neill, gave him his third win in the Ladbrokes Trophy (formerly the Hennessy) last November and started favourite to give him a fourth Grand National victory, but was pulled up three out after a prominent display. 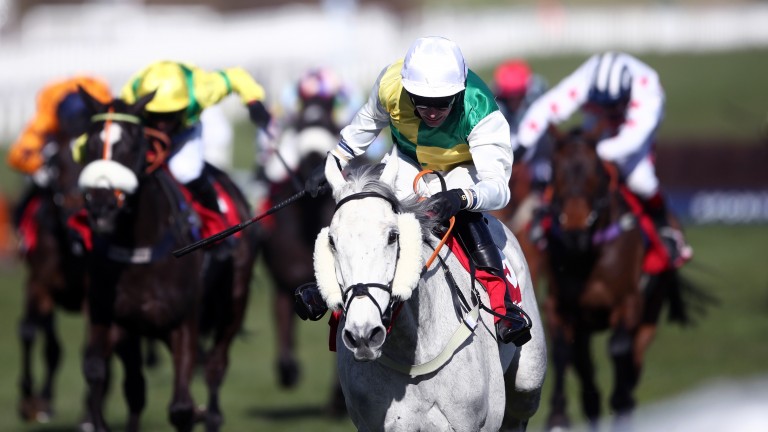 Vintage Clouds gave him his 12th Cheltenham Festival success in the Ultima Handicap Chase in March.

Hemmings had nearly 100 horses among 17 trainers in 2008 but later reduced those numbers, although his wealth reached its peak this year, being estimated at £1.115 billion in the Sunday Times Rich List.

Yet he avoided displays of wealth, emphasising his working-class roots with a ubiquitous flat cloth cap which he wore even when interviewed indoors.

He bought potential staying chasers as young store horses and was patient enough to give them the time they needed. For instance, he bought Many Clouds as a foal and Ballabriggs as a yearling.

Hurdlers played little part in the racing operation of this Aintree enthusiast, the best of them being Afsoun, third in the 2007 Champion Hurdle.

Trevor Hemmings lived at Ballaseyr Stud on the Isle of Man, where he was "among friends" – his old racehorses in retirement and current ones on summer holiday.

He also owned Monymusk Stud at Kanturk, County Cork, which acted as a nursery for his young horses before they went to Gleadhill House Stud near Chorley, Lancashire, a pre-training base run by his racing manager, Mick Meagher.

He was the biggest shareholder in Arena Leisure when that company owned Lingfield, Windsor, Southwell, Wolverhampton and Folkestone racecourses; he sold his stake to the Reuben brothers in 2012. At other times he owned Blackpool Tower and Winter Gardens, Littlewoods pools, and Preston North End FC, as well as hotels, pubs, factories and warehouses.

Among the charities he supported was the Princess Royal Trust for Carers, and as a consequence in 2011 he was appointed CVO (Commander of the Royal Victorian Order) for personal services to the royal family. He also owned High Kingdom, the eventer on whom Zara Phillips Tindall won an Olympic silver medal in 2012.

He is survived by his wife Eve, daughter and three sons including Phillip, owner of Wood Farm Stud in Shropshire.

FIRST PUBLISHED 11:00AM, OCT 12 2021
Trevor Hemmings lived at Ballaseyr Stud on the Isle of Man, where he was "among friends" – his old racehorses in retirement