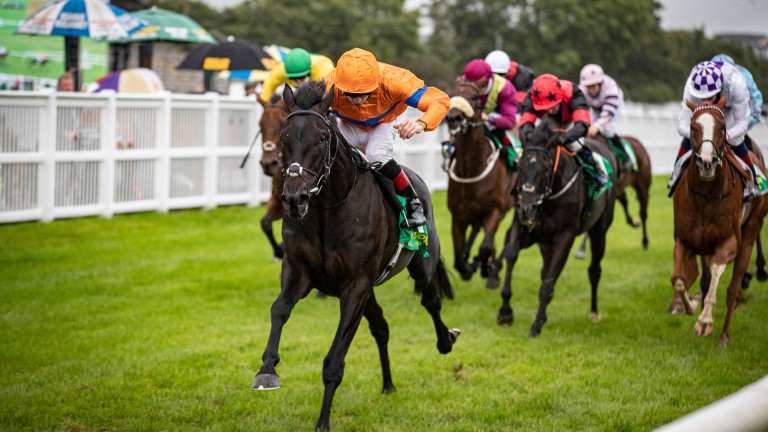 Visualisation and Declan McDonogh land the feature Listowel Stakes on Tuesday
Patrick McCann
1 of 1
By Justin O'Hanlon UPDATED 11:24AM, SEP 22 2021

Visualisation had been unable to make the step up to Group 3 company at the Curragh when last seen, but another attempt at that level looks likely after the Joseph O'Brien-trained colt made all in the feature Edmund & Josie Whelan Memorial Listowel Stakes on the third day of the harvest festival.

The three-year-old enjoyed handicap success in the summer, winning two on home soil as well as finishing second in the Golden Gates at Royal Ascot, and the way he won this Listed contest should give connections confidence he can make the step up to Group 3 level.

Declan McDonogh had him in front from early on and he picked up impressively in the straight to win by two and a half lengths from Geometrical and Casanova, with the favourite Roca Roma a never dangerous fourth.

O'Brien's assistant Brendan Powell said: "I thought Declan was brilliant on him, getting him out of the gate and to the front. He dictated it lovely and got a bit of a breather into him before the bend.

"This horse is improving all the time. Soft ground is important for him, he stays well and is very genuine. That was a good competitive race and he has won it very well.

"The ground was a bit quick for him at the Curragh but we'd have to think about going back into Group company with him. He's going to get to that point. He has enough speed for a mile but he'll stay further. He's a massive horse and he has a future."

Yet another feature race went the way of Jessica Harrington's Commonstown yard when the all-female syndicate known as It's All About The Girls saw its colours carried to victory in the premier nursery by Shane Foley on Tut Tut.

Both two-year-old fillies owned by the syndicate have won this year, Bellabel having taken a nursery at Naas last week, and this daughter of Kodi Bear was scoring for the second time this season having prevailed late on in a maiden at Leopardstown in August.

Foley had her quite close to the pace throughout and she responded best in the closing stages to get the better of a good scrap with Capitulation by a length.

Foley said: "She's a grand filly. She was a bit fresh and keen at the Curragh last time but I'd say the key to her is slow ground, she enjoys it. She could win again on soft, she really only goes through the motions.

"She's progressed well and has become big and strong. You could see her being competitive in a little trial early next year on soft ground."

FIRST PUBLISHED 6:30PM, SEP 21 2021
We'd have to think about going back into Group company with him. He's going to get to that point