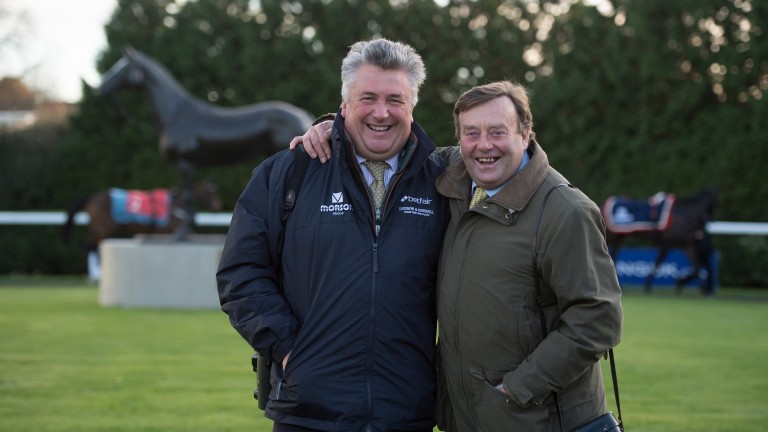 Paul Nicholls and Nicky Henderson both feature in the New Year Honours List
Edward Whitaker
1 of 1
By Lee Mottershead UPDATED 9:35AM, DEC 28 2019

Paul Nicholls and Nicky Henderson have been nigh on inseparable at the top of the championship table for years and have now secured a magnificent dead-heat after Britain's dominant jumps trainers were each awarded an OBE in the New Year Honours List.

Two racing legends who between them have been crowned champion on 16 occasions spoke of their shock, delight and pride on being saluted by the nation for services to horseracing.

Although Henderson and Nicholls – both of whom enjoyed Grade 1 success at Kempton on Boxing Day – were informed weeks ago that a royal appointment was imminent, neither man is thought to have known the other was also being recognised.

For Nicholls, news of his award puts the seal on an amazing Christmas period in which he secured his 11th triumph in the Ladbrokes King George VI Chase with Clan Des Obeaux. The master of Paul Barber's Manor Farm Stables in Ditcheat has also claimed the trainers' title on 11 occasions and masterminded the careers of equine icons Kauto Star and Denman.

"I must have impressed the Queen when she visited us in the spring to see the horses!" joked Nicholls on Friday.

"I received a lovely letter a few weeks back, asking me if I would accept an OBE – and I definitely wasn't going to say no! It's absolutely brilliant.

"It was a complete shock and it's a great honour. I'm really proud but it still hasn't sunk in yet, so it's hard to put it into words. It's superb for racing, for everyone who has helped me along the way and everyone in Team Ditcheat." 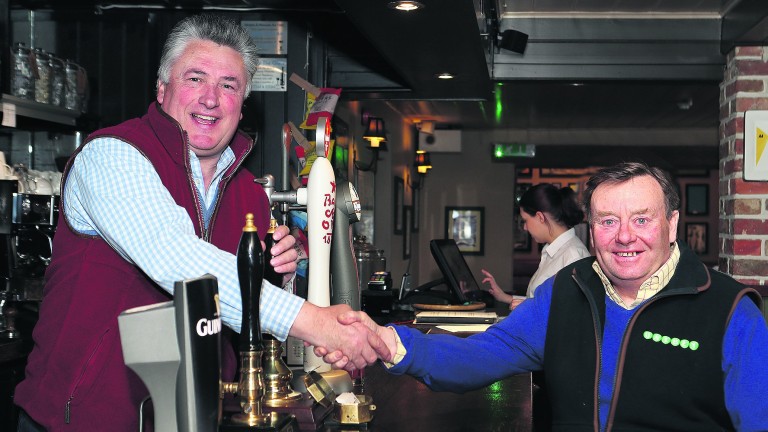 Nicholls added: "Dad was in the police force and we had no connection with horses whatsoever. We had no money and at one point lived in what was, in effect, a police council house. Mum and Dad built things up from there and they have supported me all the way, making a lot of sacrifices in order to help me.

"In fact, this is a lovely present for them, as it's their 60th wedding anniversary today. It has all had to be hush-hush but I did tell Mum and Dad and also Mr Barber, who was so proud and chuffed."

The Lambourn-based Henderson, who collected the first of his five championship trophies in 1986, was two years ago made a Lieutenant of the Royal Victorian Order, a personal gift of the Queen, for whom he trains.

"It is very kind of them, and I'm very honoured, but the OBE really ought to have been given to Seven Barrows, not to me," said Henderson, whose greatest superstar has been Sprinter Sacre.

"I have been very lucky and racing has always been very good to me. The sport has given me a lot of pleasure and much more besides. We have bashed away for a number of years and had some wonderful times. It's all about the people, the horses and the fun we've had, the high days and low days.

"We've had a lot out of racing but I hope we've put a bit back in as well."

The 2020 New Year Honours List is full of good news for the sport, with the MBE awarded to Afghan war veteran Captain Guy Disney, who in 2017 became the first jockey to ride a winner under Rules in Britain with a prosthetic leg, Hamilton chief executive Vivien Currie, former Down Royal general manager Mike Todd and David Muir, the RSPCA's racing consultant.

Also celebrating is leading owner Graham Wylie, who has been knighted for his services to business and charity, while the Queen's jumps racing advisor Sir Michael Oswald is given the Grand Cross of the (Royal) Victorian Order.

FIRST PUBLISHED 10:30PM, DEC 27 2019
I must have impressed the Queen when she visited us in the spring to see the horses!