Latest RACE FOR THE TITLE 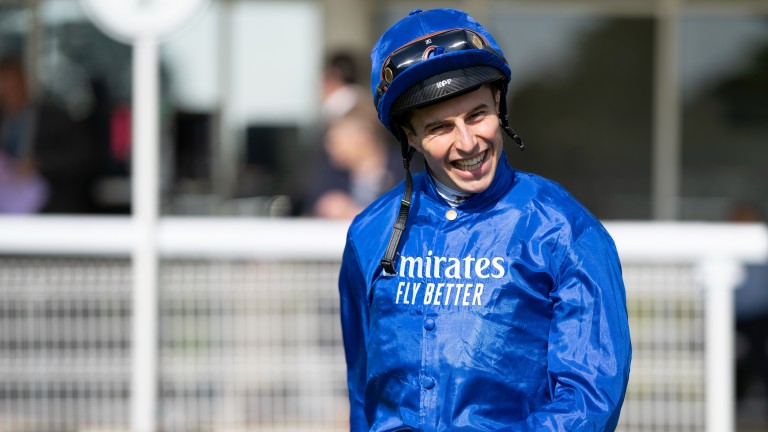 An epic battle for the British Flat jockeys' championship looks set to go down to the wire after William Buick rode a double at Nottingham on Wednesday to reduce Oisin Murphy's lead to just two.

Buick halved the reigning champion's cushion by landing two of the last three races on the card and now heads to Chelmsford on Thursday evening as joint-favourite at 5-6 with William Hill to take the crown, although other firms still have Murphy as a marginal market leader to make it three titles on the spin.

After a frustrating start to the week which saw three of Buick's mounts at Wolverhampton on Monday withdrawn, the Godolphin rider has hit back in spectacular fashion with five winners across the last two days, leaving him tantalisingly close to a maiden title before the battle concludes on British Champions Day at Ascot on Saturday.

Murphy walked away disappointed from Nottingham, winless from six rides with a pair of fifth-placed finishes the closest he came to adding to his 150 winners, but remained positive on Wednesday evening about his prospects for the final three days of the championship.

Speaking after racing, he said: "William is riding very well but I've got good chances over the next two days and I'm really looking forward to Saturday. It's fantastic racing and there are multiple equine stars on show." 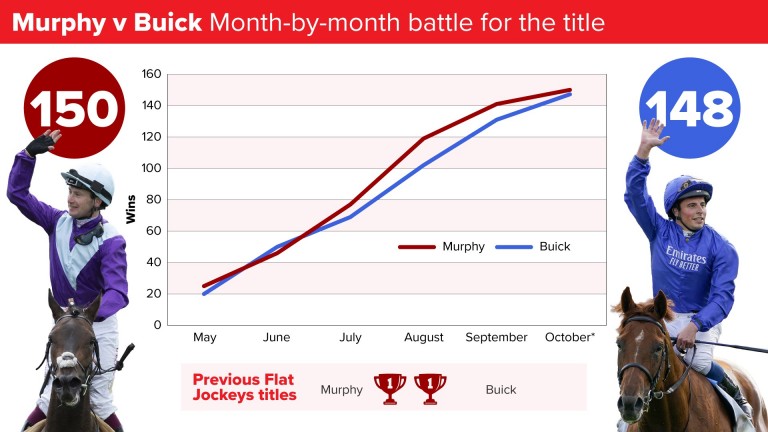 Buick's full book of eight rides at Nottingham was two more than Murphy, but he had to stay patient before striking twice on the George Boughey-trained Zebelle in the 5f nursery and Raasel in the 5f handicap, the latter completing a hat-trick for trainer Mick Appleby.

Speaking to Racing TV after his victory on Zebelle, Buick said: "They went fast and she was outpaced and you're always worried giving ground away over five furlongs. She's very genuine, handled that ground well and she came home well. I've had chances all day so hopefully we can keep going."

Paddy Power still give the slight advantage to Murphy in his pursuit of a third consecutive title, shortening Buick to 11-10 (from 7-4) with Murphy the 4-6 favourite (from 4-9), and spokesman Paul Binfield said: "This reminds me so much of the titanic struggle between Paul Hanagan and Richard Hughes in 2010 and punters continue to want William, who well and truly possesses the momentum at present."

After two days together in the Midlands, Buick and Murphy both travel south to Chelmsford on Thursday evening, with Buick having a full book of seven rides whereas Murphy has six.

A key battle looks to be the 7f novice (6.30) for two-year-olds, with Murphy's Notions and Buick's Ramadhaan likely to be vying for favouritism, although Buick will hope to have already stolen a march by then as Murphy misses the preceding mile novice (6.00), which sees Buick partner Typical Woman. That follows the opening 1m2f nursery (5.30), in which Murphy starts his day in the colours of Alcohol Free's owner Jeff Smith with Buick on the James Tate-trained Alpine Lady. 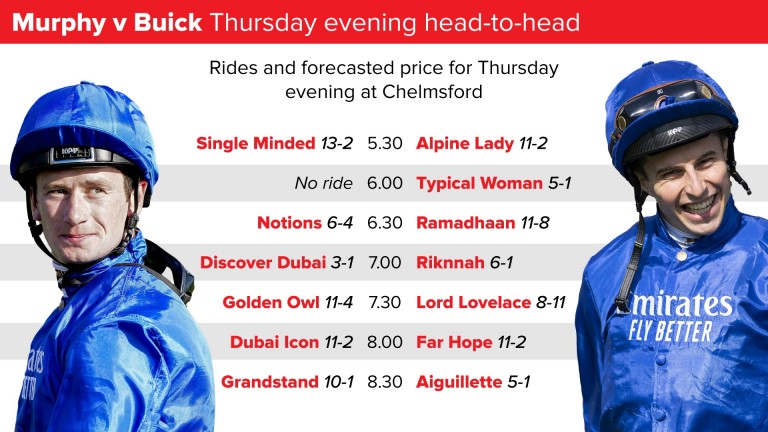 Buick has another big chance on possible odds-on favourite Lady Lovelace in the 7f novice (7.30) for older horses for Simon and Ed Crisford, who also supply the rider with Riknnah in the 7f handicap (7.00) and and Far Hope in the mile handicap (8.00).

Buick will find himself up against the Godolphin blue in two of those races, as Murphy teams up with Saeed bin Suroor on Discover Dubai and Dubai Icon either side of a ride on Golden Owl for Joseph Tuite. The champion then finishes his evening on Richard Price's Grandstand in another mile handicap (8.30), in which Buick takes the ride on Gary Moore's recent Lingfield winner Aiguillette.

FIRST PUBLISHED 1:13PM, OCT 13 2021
William is riding very well but I've got good chances over the next two days and I'm really looking forward to Saturday