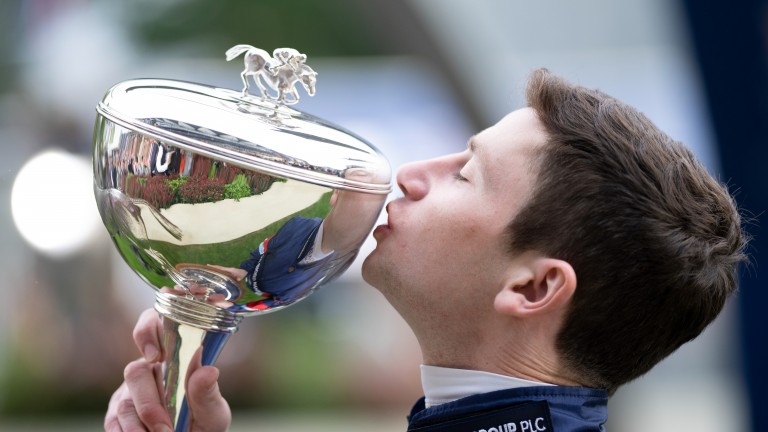 Oisin Murphy has won the British Flat jockeys' championship for a third consecutive season after title rival William Buick's failure to win the Champion Stakes on Adayar left the defending champion with an unassailable lead.

A titanic fight went to the final day of the championship season, but Buick was facing a tough task after Murphy secured a double at Haydock on Friday to move him three winners clear on 153.

Despite managing to narrow the gap to two after Creative Force's win in the Champions Sprint, Buick ran out of time and, after neither could manage another win on the card, Murphy won 153-151.

"I'm over the moon and thrilled to get it across the line," Murphy said.

"Thank you to my family and everyone, I've got a massive support group. The last week I've had a lot of people on my side. Frankie [Dettori] has been there every day messaging me and making sure my spirits were up. I was riding off instinct and as normal, which was key.

"You need to make every ride count and I was running out of opportunities but I held it together thankfully in the end."

Asked if this had been the hardest of his three championships, Murphy told ITV's Oli Bell: "Yeah, it was, especially in the last two weeks. He [Buick] was getting a lot more support than I was but I still had the likes of Andrew [Balding], Ed Walker, Hughie Morrison – I'll leave people out but Saeed bin Suroor has been amazing as well – so thanks to them."

Murphy, 26, is winning the championship for the third season in a row in what has been another successful campaign, though not one without controversy.

Last weekend he was forced to miss his rides at Newmarket after failing a breathalyser test at the course. It has since emerged that he was involved in a drunken altercation with a bloodstock agent at a pub in the town the night before.

"I think everyone knows that I'm human and I'm quite honest but I need to do better," said Murphy. "I don't want any issues surrounding my career and let's just focus on trying to ride winners and hopefully try to win another jockeys' championship next year."

The rider was also suspended for the first three months of this year after his urine sample tested positive for metabolites of cocaine in a drugs test in France in July 2020.

FIRST PUBLISHED 1:37PM, OCT 16 2021
You need to make every ride count and I was running out of opportunities but I held it together thankfully in the end

'How can you be wrong?' - Nicky Henderson hits back at Shishkin critics No Klassical Dream in Hatton's Grace as Honeysuckle heads Fairyhouse field Fantasy Ladbrokes Trophy: who would win if the best from the last 20 years met? 2021 Ladbrokes Trophy at Newbury: the runners, the odds, the verdict ITV Racing tips: one key runner from each of the five races on ITV3 on Friday Get half-price access to Racing Post Members' Club for a whole year