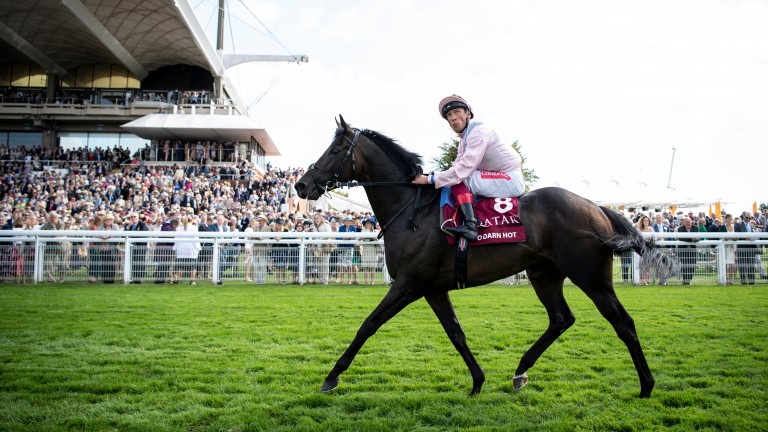 Too Darn Hot: has been retired after sustaining a hairline fracture
Edward Whitaker
1 of 1
By Jack Haynes UPDATED 11:14AM, AUG 6 2019

Five days after lighting up Glorious Goodwood with a brilliant victory in the Sussex Stakes, Too Darn Hot was retired on Monday with a hairline fracture of a hind cannonbone.

It is thought the three-time Group 1 winner suffered the injury during his big-race success on Wednesday.

The John Gosden-trained Too Darn Hot, who won six of his nine starts and never finished out of the first three, underwent surgery at the Newmarket Equine Hospital.

"I'm glad to say he has come safely through surgery. The injury is not life threatening and he should make a full recovery.

Very sad news Too Darn Hot will not be racing again, he was a champion and I will miss riding him pic.twitter.com/9h2nTD5Ufw

"His future now lies at Dalham Hall Stud in Newmarket where he will recuperate and stand at stud for the 2020 season.

"The Lloyd Webbers and I are very sad we won't see this champion on the racecourse again. He has given us all so much excitement in winning three Group 1 races over the last 12 months, culminating in his brilliant victory last week in the Qatar Sussex Stakes."

Frankie Dettori, who partnered the colt in all his nine starts, paid tribute on Twitter: "Very sad news Too Darn Hot will not be racing again, he was a champion and I will miss riding him."

Too Darn Hot drew comparisons to the great Frankel during his two-year-old campaign, in which he won on all four starts, including a first top-level success in the Darley Dewhurst Stakes.

International handicappers shared that view, awarding Too Darn Hot a rating of 126 in January – the same figure given to Frankel and Dream Ahead at the end of the 2010 season.

A setback in the spring ruled Too Darn Hot out of a tilt at the Qipco 2,000 Guineas in May and he suffered his first defeat when second to Telecaster in the Dante at York later that month.

Two placed efforts in Group 1 company followed – finishing second to Phoenix Of Spain in the Irish 2,000 Guineas and third behind Circus Maximus in the St James's Palace Stakes at Royal Ascot – before Too Darn Hot returned to the peak of his powers over shorter distances on what proved his final two starts.

You were an absolute champion and I think anybody that knows me knows I worship the ground you walk on,I’m thankful you got the chance to show the rare talent you had and I’m even more thankful I got the privilege of looking through your ears everyday Happy retirement TDHpic.twitter.com/5WPrGkLnCi

The son of Dubawi routed the Prix Jean Prat field in scoring by three lengths at Deauville before prevailing by half a length over Royal Ascot foe Circus Maximus at Glorious Goodwood on Wednesday.

The Breeders' Cup Mile was pinpointed as a main target for later in the season following his victory at the West Sussex track under Frankie Dettori, who partnered Too Darn Hot throughout his career.

Following a seven-length debut win at Sandown, he landed the Solario Stakes at the Esher track and Champagne Stakes at Doncaster before beating Advertise in the Dewhurst, after which Dettori described Too Darn Hot as "an amazing horse".

The 2018 Dewhurst Stakes looked a fiercely competitive running with Phoenix Stakes winner Advertise and National Stakes second Anthony Van Dyck providing stiff opposition to Too Darn Hot, but he was in a different league at Newmarket.

The son of Dubawi secured a two-and-three-quarter-length verdict over his rivals and a whopping RPR of 125 – one we seldom see from a juvenile – which at the time fuelled comparisons with the legendary Frankel. It was no surprise to see him crowned champion two-year-old colt. 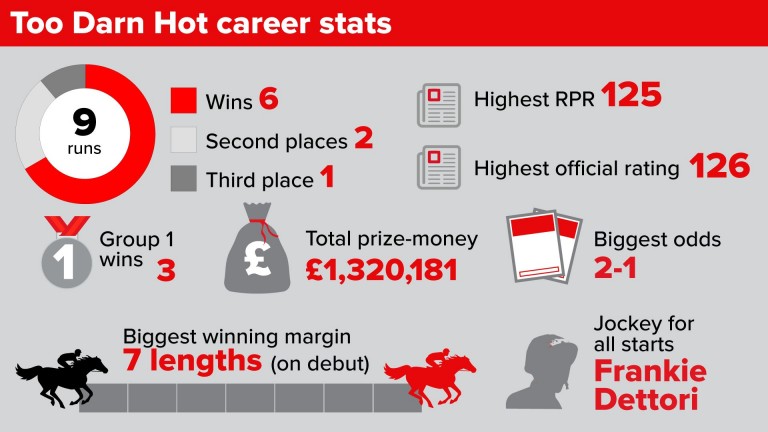 The John Gosden-trained three-year-old’s Classic campaign was anything but plain sailing with three straight defeats as favourite in the Dante Stakes, Irish 2,000 Guineas and St James’s Palace Stakes, testing the mettle of even his most ardent supporters.

Arriving at Deauville in the Prix Jean Prat with questions to answer, Too Darn Hot demonstrated his class by accounting for Space Blues by a comfortable three lengths, adding a second Group 1 to his CV and raising his stock as a future stallion prospect.

Too Darn Hot's final racecourse appearance saw him renew rivalry with his Ascot conqueror Circus Maximus in the Sussex Stakes, but his victory was never really in doubt.

Given another fine ride by Frankie Dettori, the champion rebuilt his briefly dented reputation with a triumph which was more commanding than the half-length winning margin suggested. A Clarehaven great.

FIRST PUBLISHED 5:38PM, AUG 5 2019
The Lloyd Webbers and I are very sad we won't see this champion on the racecourse again