Latest LIVING UP TO HIS NAME

Reckless Behavior! Horse runs out of Uttoxeter to get a pizza the action 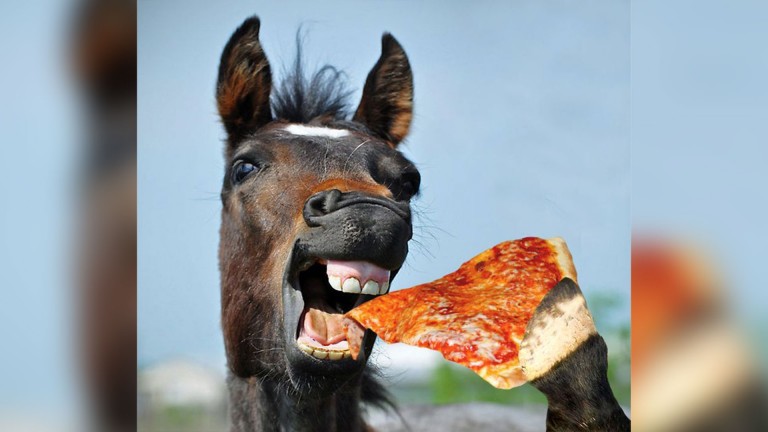 Top that: Reckless Behavior was spotted outside Domino's after running out of Uttoxeter racecourse
1 of 1
By James Stevens UPDATED 7:15PM, MAR 17 2019

Not many horses live up to their name as well as Reckless Behavior, who on Saturday managed to run out of Uttoxeter racecourse and do a spot of sightseeing around some local streets, before being caught beside a Domino's Pizza shop and a pub.

The eventful episode began when the tapes went up for the 2m4f handicap chase. The seven-year-old whipped round, leaving rider Sean Bowen on the floor, then crashed through the rails and escaped from the track.

Followed by a convoy of vehicles from the course, he made his way on to the streets of Uttoxeter, before reportedly being caught by a woman who ran out of one of the nearby pubs to catch him in the town square near Domino's.

Bowen, whose mount was sent off the 5-2 favourite, on Sunday reflected on the escapade. "He certainly goes by his name, I suppose," he said. "I heard that after he went through the rails he ended up by Domino's."

Trainer Caroline Bailey said: "He broke through the fence and got out of the racecourse and I think he went past a few roundabouts. However, he wasn't going very fast and was being tracked by an ambulance and some cars.

"I'm not quite sure where he ended up – I think he was outside a pub when they got hold of him. Luckily, he was okay afterwards and he'll run again at Southwell tomorrow."

Uttoxeter clerk of the course Eloise Quayle said: "We were lucky to have a lot of additional support on the site, with it being Midlands Grand National day, so when he broke loose we had racecourse staff from Worcester and Chepstow after him.

Sean Bowen: "He certainly goes by his name"
Martin Lynch

"Thankfully, a woman came out of a pub as he was cantering down the high street. He slid to a halt and she got hold of his rein and he just stood there. We'll be reviewing what happened."

Although the incident had a happy ending, stewards did look into the matter, with their report reading: "An inquiry was held to determine how Reckless Behavior was able to leave the confines of the racecourse before being caught a short distance away.

"The clerk of the course was interviewed and stated that the gelding had gone through the outside running rail before trotting loose out of an unsupervised main exit.

"Her comments were noted and a report was forwarded to the head office of the British Horseracing Authority for further consideration."

Reckless Behavior and Bowen will hope for a quieter time of things at Southwell on Monday when they contest the opening race, a 3m handicap chase.

Bowen said: "He has plenty of ability and could go well tomorrow, but he just has his own way of thinking. I think if he jumps off tomorrow, then he'll run well."

FIRST PUBLISHED 5:29PM, MAR 17 2019
I think he went past a few roundabouts, but he wasn?t going very fast and he was being tracked by an ambulance and some cars