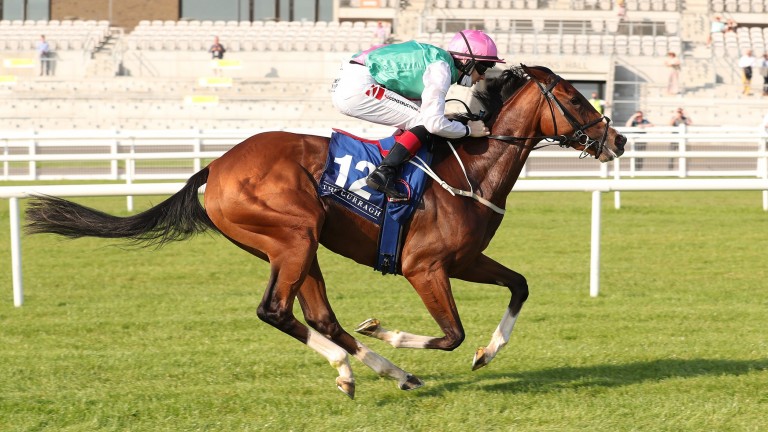 Connections of unbeaten filly Sacred Bridge are excited to see her test her top-level potential when she steps into Group 1 company for the first time in the Cheveley Park Stakes at Newmarket on Saturday, with Juddmonte racing manager Barry Mahon saying they "wouldn't swap her for anything".

Sacred Bridge, trained by Ger Lyons, has gone from strength to strength since winning a Naas maiden in June and became the highest-rated two-year-old filly in Europe – Moyglare winner Discoveries has since joined her on a rating of 111 – with a dominant dismissal of her rivals in the Group 3 Round Tower Stakes at the Curragh last time out.

She was immediately made favourite to follow up in the Cheveley Park over the same six-furlong trip but faces her strongest opposition yet with Lowther Stakes one-two Zain Claudette and Sandrine among 15 fillies left in the race at Monday's five-day stage.

Juddmonte are looking to win the race they sponsor for the first time since Special Duty in 2009 and Mahon said: "We're very excited – she's the top-rated filly in Europe and Ger and the team are very happy with her.

"She's run four times and won four times, so you can't knock her record, but it's hard to compare anything she's done yet until she steps into Group 1 company against other top-class fillies. She's done everything that's been asked of her and we wouldn't swap her for anything else, so hopefully she'll do us proud come the weekend."

He added: "We're just hoping we don't get too much more rain as there was a good bit overnight and this morning [Monday]. As long as the ground is good or better she'll take part and hopefully give a good account of herself." 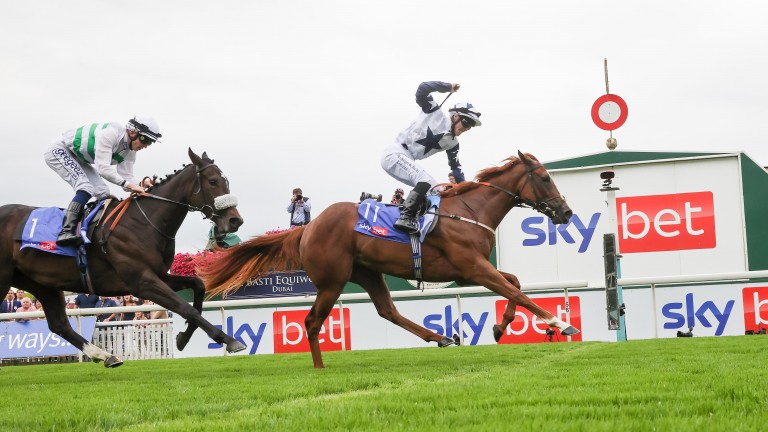 Sacred Bridge's victory over five furlongs at Tipperary on her second start proved she has plenty of pace, but equally as encouraging was the stamina she displayed in the Round Tower.

"She'd been training well before the Curragh and that was her most impressive performance yet," Mahon said. "We knew she had the speed but it was good to see she had the stamina as well to finish out a stiff six furlongs so well."

Group 3 Sirenia Stakes winner Eve Lodge was supplemented for the Cheveley Park at a cost of £20,000, as was the George Boughey-trained Corazon.

Eve Lodge's trainer Charlie Fellowes said the decision was made a lot easier after seeing Wings Of War, runner-up in the Sirenia, bolster that form by winning the Group 2 Mill Reef Stakes at Newbury on Saturday.

"Before the Mill Reef we had talked about it and the owner was really keen to go for the Cheveley Park, but I poured cold water on the idea as there was a little part of me that wondered what we'd beaten at Kempton," Fellowes said. 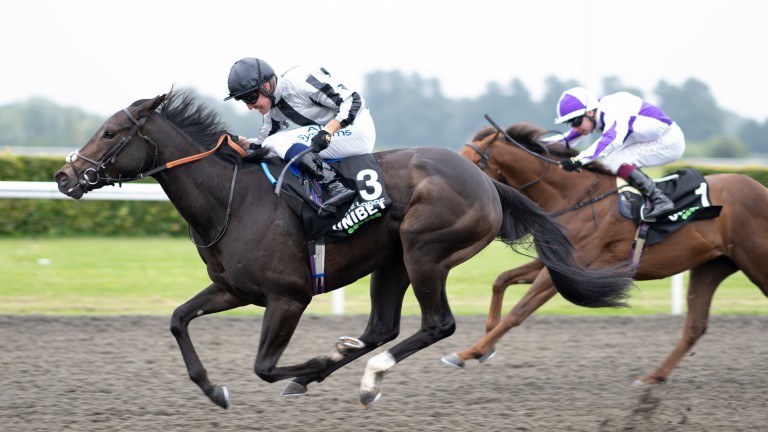 "I needn't have worried as that form now looks rather good and we've always thought a huge amount of her, but there's no pressure on us to run her – despite paying the £20,000 – if the ground comes up too quick.

"They don't give Cheveley Parks away and we're probably in a little group behind Zain Claudette, Sandrine and Sacred Bridge, who looks pretty special."

The Richard Fahey-trained colt will bid for his second Group 1 having left his rivals trailing with a blistering turn of foot in the Prix Morny at Deauville last month.

The third and fourth that day, Asymmetric and Armor, are both in line to reoppose, while the latter's fellow Al Shaqab Racing-owned colts Ebro River – winner of the Group 1 Phoenix Stakes at the Curragh two starts ago – and Lusail were also left in.

The Phoenix Stakes form is well represented with Irish trainers Ger Lyons and Fozzy Stack keeping Dr Zempf and Castle Star, who were second and fourth respectively, in contention.

The field for the bet365 Cambridgeshire (3.40) will need to be cut in half by raceday as 70 horses were left in contention on Monday for the prestigious handicap.

The Andrew Balding-trained Bell Rock tops the weights, but Uncle Bryn – considered a Derby candidate earlier in the season – has attracted the most interest in the ante-post market after he bounced back to form impressively in an Ascot handicap this month.

FIRST PUBLISHED 3:53PM, SEP 20 2021
I needn't have worried as that form now looks rather good and we've always thought a huge amount of her