Latest WHAT A WEEKEND 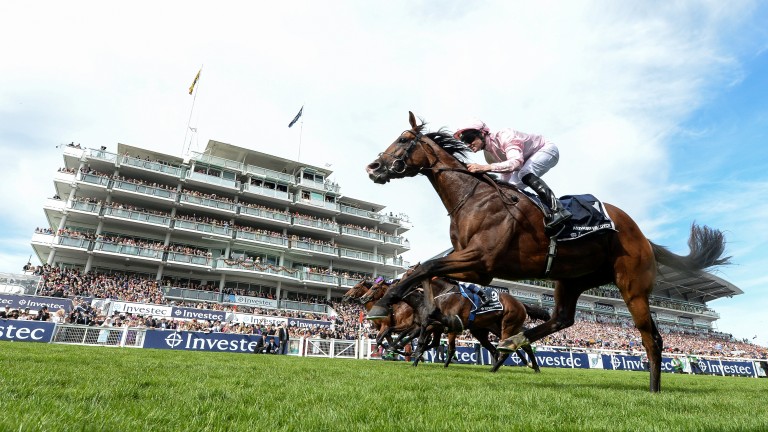 Who will win this year's Investec Derby at Epsom?
Edward Whitaker (racingpost.com/photos)
1 of 1
By Matt Butler UPDATED 7:53PM, JUN 29 2020

Owners will be back on the racecourse for the Investec Derby and Oaks on Saturday and the return of Enable in the Coral-Eclipse on Sunday on what one leading bookmaker called the "most sensational weekend of racing imaginable".

In what promises to be an incredible 48 hours the likes of English King and Kameko will face off against up to seven from Aidan O'Brien's yard in the Derby, Frankly Darling and Love will do battle in the Oaks and Enable will make her comeback in the Coral-Eclipse against a potentially star-studded field including Ghaiyyath, Japan and Lord North. The Prix du Jockey Club and Prix de Diane also take place on Sunday at Chantilly.

Under plans announced on Monday owners, who have not been allowed on British racecourses since March because of the coronavirus pandemic, will be able to attend two test events at Southwell and Kempton on Wednesday and then all meetings from this weekend as racing takes another step towards something closer to normality. 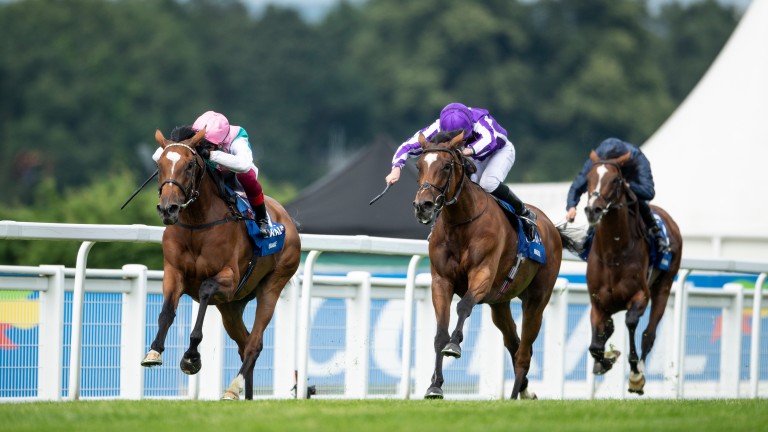 A maximum of two owners per horse are allowed to attend the behind-closed-doors meetings, with strict health screenings in place as has been the case for racing's participants since the return of the sport in Britain on June 1 in line with government guidance.

However, the plans at least start the phased return of owners to the racecourse for the first time since the Covid-19 shutdown, and ROA chief executive Charlie Liverton said: "It’s great to have owners back on the course and I’d like to thank the BHA, racecourses and the team at the ROA for their hard work since the resumption of racing to put in place protocols for owners to attend."

ITV will broadcast the Derby day and Coral-Eclipse double header which takes the sporting centre-stage on a weekend when lockdown restrictions loosen further in England with the re-opening of pubs.

Coral's spokesperson Simon Clare said: "This is the most sensational weekend of racing imaginable in terms of prestige and star quality. 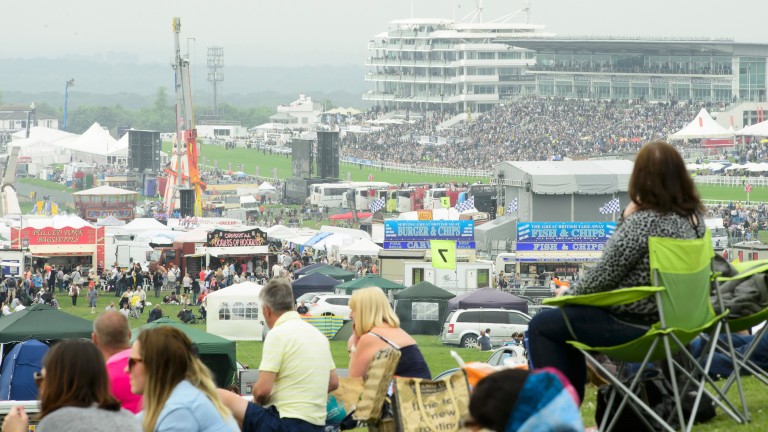 "The Derby is the biggest Flat race of the year bar none, and the Coral-Eclipse and the Oaks are not far behind both in terms of their importance in the calendar and their appeal to racing fans and punters alike.

"Add in the huge X-factor that Enable brings to the party in Sunday’s Coral-Eclipse, and the expectation of significant ITV Racing audiences on both days, and it’s no exaggeration to say this is a weekend the quality of which we have never seen before, and may never see again. A weekend to look forward to and savour.”

The Ed Walker-trained ante-post favourite English King was among 17 entries for the Derby alongside 2,000 Guineas winner Kameko and seven representing O'Brien, who will bid to become the most successful trainer in the Classic's long history when he targets an eighth win in the race on Saturday.

O'Brien, whose seven Derby winners put him alongside Robert Robson, John Porter and Fred Darling, indicated last week his intention to run up to six horses in the £500,000 Classic, a number which grew to seven on Monday lunchtime when the deadline for entries passed.

Last Saturday's nine-length Curragh winner Serpentine was a surprise addition to the team of Russian Emperor, Vatican City, Mogul, Armory, Mythical and Amhran Na Bhfiann, although none of O'Brien's Irish Derby runners, including winner Santiago, were put in contention for an unconventional and quick turnaround.

It will not be O'Brien's biggest Derby team even if all seven entries are declared on Thursday, as he ran eight in the 2007 Derby won by the Peter Chapple-Hyam-trained Authorized. However, he did run seven when successful with Anthony Van Dyck last year.

In the Oaks, which will be run an hour and a quarter before the Derby, O'Brien's Classic-winning fillies Love and Peaceful could collide for the first time, with the Ribblesdale 1-2-3, Frankly Darling, Ennistymon and Passion, also listed in the possible 11-runner field. 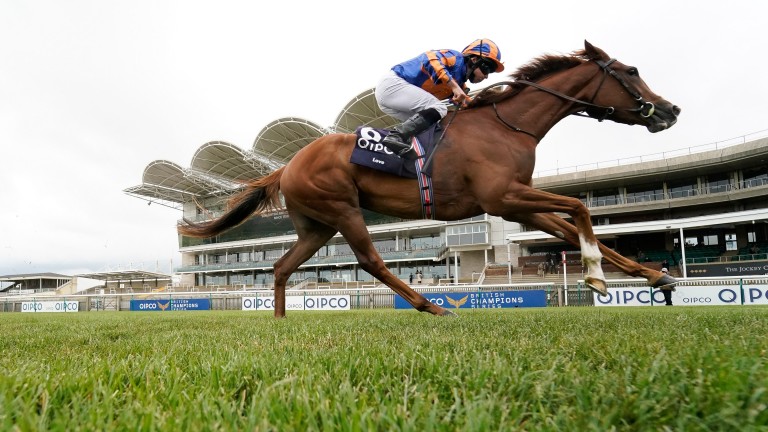 It will also be a unique weekend for Andrew Cooper, clerk of the course at both Epsom and Sandown, but one which he feels his team is well prepared for, including the task of erecting several miles of fence around the Epsom Downs.

Speaking on Monday afternoon, Cooper said: "It all comes down to keeping ahead and keeping on top of things. I think we've done well in our preparation for the two days.

"Most but not all of the team will be at Epsom on Saturday and Sandown on Sunday but there will be some at Sandown on Saturday. We're comfortable we've got it covered."

Cooper was delighted with the entries received for the weekend's three Group 1 races and rates conditions to be similar at both courses, although there is uncertainty about how much rain will arrive in the coming days.

He said: "I'm at Epsom this afternoon and I was at Sandown this morning. It's been a dry, blustery day and the ground on both tracks is looking good. As a description I would say both courses are good, good to firm in places. 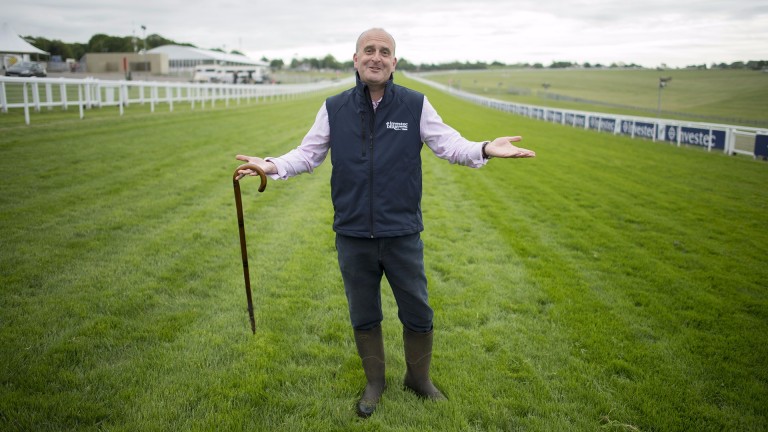 Andrew Cooper: clerk of the course at Epsom and Sandown has a busy week in store
Edward Whitaker

"I don't think anyone can have any great confidence in volumes of rain for this week. There are days where there's a risk of rain but it's relatively low amounts, there's uncertainty from Wednesday onwards. Nothing we're seeing is significant volumes, it's just showers really.

"It looks as if temperatures won't exceed more than 22 degrees and a low at about the 18 degrees. There's a possibility it'll be rainy on Derby day."

He added: "It was always going to be a fascinating entry morning, not just us but for everyone. I think both days are fabulous and we're delighted with them, the Eclipse in particular – you're not looking at that and missing the three-year-olds, as you couldn't wish for better than that."

Read more on a thrilling weekend

FIRST PUBLISHED 7:03PM, JUN 29 2020
This is the most sensational weekend of racing imaginable in terms of prestige and star quality