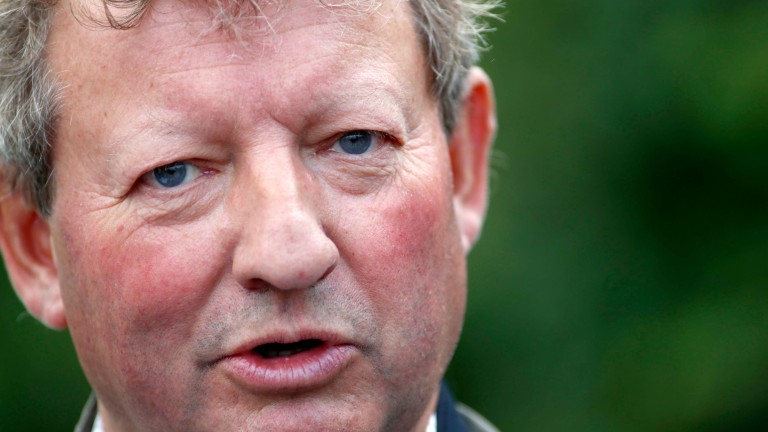 Mark Johnston: does not believe that cobalt is performance-enhancing
Dan Abraham
1 of 1
By David Carr UPDATED 7:40PM, AUG 15 2018

Mark Johnston on Wednesday suggested the BHA did not need to focus on cobalt in the wake of Robin Bastiman’s ban for administering the compound.

The trainer, who is a qualified vet, also hit out at the “ignorance” of those who use the substance, which he believes has no positive effect on a horse.

When asked about the case, Johnston – a former director of the BHA – expressed disappointment that racing’s ruling body does not share his view of the substance.

“It worries me that the BHA seem to believe it’s performance-enhancing,” he said. “It’s not a banned substance, it’s only the way he [Bastiman] used it that makes it a banned substance because the horse had more in it than could occur naturally.

“It’s the same with bicarbonate [milkshaking]. When you’re taking a natural substance and it’s only the quantities, it gets to be a little bit of a grey area. It bothers me that they’re so fixated on milkshaking and now the in thing is cobalt.”

Johnston added: “I don’t believe for one second it makes them run faster. There’s mixed evidence and different opinions on whether it’s of any benefit to humans. I think most of the evidence suggests it probably isn’t. Even if it is, why should that work in horses?

“The horse has no shortage of red cells. It’s got 40 per cent spare in its spleen, it injects them under pressure, it doesn’t need more oxygen-carrying capacity. That’s not the limiting factor on getting oxygen to its muscles. The circulatory system will carry it to the muscles and it will carry it fast, faster than in any other species. So why would any idiot want to give them cobalt?

“Yet people do, because they’ll give them whatever some clown tells them is going to make them run faster. The most disappointing thing is the ignorance of people who will give things to horses with no evidence it’s going to make them go any quicker. They’re all looking for something to turn lead into gold.”

But the BHA insists that cobalt is potentially performance enhancing and head of media Robin Mounsey said: "While cobalt is an essential trace element and is naturally present in the horse, when present at concentrations that exceed normal physiological parameters cobalt has the potential to activate the erythropoietin (EPO) gene, which increases the production of red blood cells and therefore may have the potential to enhance performance.

"This is a view that is supported by significant academic and scientific research and has been agreed by the international racing community. As a result the International Federation of Horseracing Authorities adopted a raceday threshold for cobalt per millilitre in urine which has been implemented across major racing nations.

"It's also possible that exposure to significantly increased levels of cobalt may have welfare implications for the horse. It's for these reasons that the international racing community has identified the misuse of cobalt as both an integrity and welfare risk for the sport."

FIRST PUBLISHED 7:00PM, AUG 15 2018
People give things to horses with no evidence that it's going to make them go any quicker. They are looking for something to turn lead into gold

Oisin Murphy keeping danger at bay with vital winner in title battle Mark Johnston: 'But for Charlie, I might think it was time to pack up and run' Johnston has 'incredible team' to face Stradivarius after Subjectivist strike Johnston has Derby dreams for Gear Up after Criterium de Saint-Cloud success Expert analysis as Princess Zoe aims for Group 1 double in Prix Royal-Oak 'How many owners are we going to lose?' - Mark Johnston on fears for the future