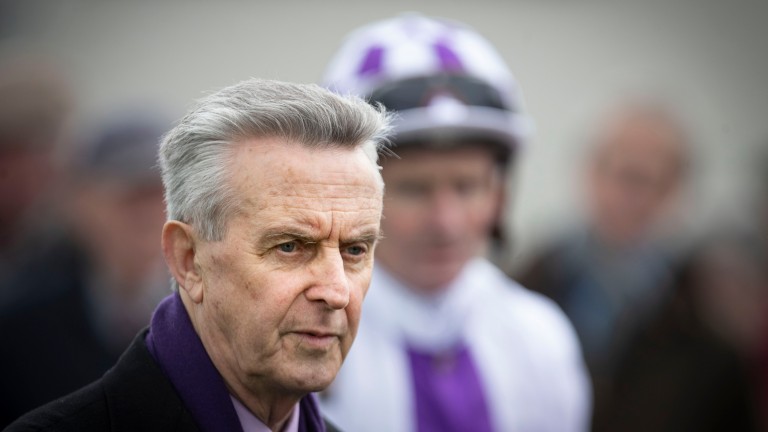 Jim Bolger: will not appear before the Oireachtas Agriculture Committee
Patrick McCann (racingpost.com/photos)
1 of 1
By Mark Boylan UPDATED 9:18PM, JUN 30 2021

Jim Bolger will not attend the hearings that have been called by the Oireachtas Agriculture Committee as a result of his concerns over illegal drug use in racing having informed the group he is not in a position to do so following legal advice.

Bolger, who last year described drug cheats as the number one problem in Irish racing, has reaffirmed his stance in a series of recent Sunday Independent interviews with Paul Kimmage, suggesting "there will be a Lance Armstrong in Irish racing".

In the wake of those interviews, the agriculture committee chairman Jackie Cahill stated that it was unanimously agreed at government level to invite Bolger to appear in front of the parliamentary group, along with a number of other key racing bodies, to address his claims.

However, while Bolger would not confirm or deny whether he will not be accepting the invitation to face questions about those assertions when contacted by the Racing Post, a government source has confirmed that he has turned down the invite on legal advice.

"The committee has received notice that Mr Bolger is not in a position to attend after taking legal advice," the source said. "It needed clarifying but the whole story is now up in the air so we don't know what is going to happen."

In the first of the two recent Sunday Independent features, the leading trainer, breeder and owner insisted he could not name names because he did not want to end up in the High Court.

While there would be some immunity to those making statements in parliamentary sittings, it is understood Bolger would not be privy to the same level of parliamentary privilege as elected representatives.

Three separate hearings will take place across July 8 and 13, with representatives of Horse Racing Ireland (HRI) and the Irish Horseracing Regulatory Board (IHRB) in front of the committee from 9.30am to 11.30am on Thursday of next week.

Representatives from the Irish Racehorse Trainers Association (IRTA), of which Bolger is no longer a member, will appear on Tuesday, July 13 from 3.30pm to 4.30pm before those from the Department of Agriculture, Food and the Marine attend immediately after until 5.30pm.

In a statement released on Wednesday afternoon, the Fianna Fail TD explained: "The committee has agreed to a series of meetings to discuss the concerning commentary around the integrity of the horseracing industry in Ireland and possible drug use in the sport.

"We have taken the opportunity to invite the relevant individuals, bodies and organisations in to discuss the recent, very concerning, commentary on the matter and giving them the time and place to debate the issues and highlight their own concerns."

The Joint-Committee on Agriculture, Food and the Marine has 14 members, nine from the Dail and five from the Seanad.

Cahill added: "We are global leaders in the horseracing industry and any question around its integrity or the possibility of drug use could be extremely damaging.

"Breeders, jockeys, owners and trainers are dependent on the viability of the sport in Ireland and the good name of the industry around the world.

"The committee hopes that these meetings will bring clarity to the situation. The committee looks forward to an enlightening debate over the coming weeks."

In an interview with RTE broadcast last weekend, leading trainer Jessica Harrington asked "where is this all coming from?" in response to Bolger's claims, describing how the suggestion that Irish trainers are doping horses makes her sad.

FIRST PUBLISHED 7:30PM, JUN 30 2021
It needed clarifying but the whole story is now up in the air so we don't know what is going to happen