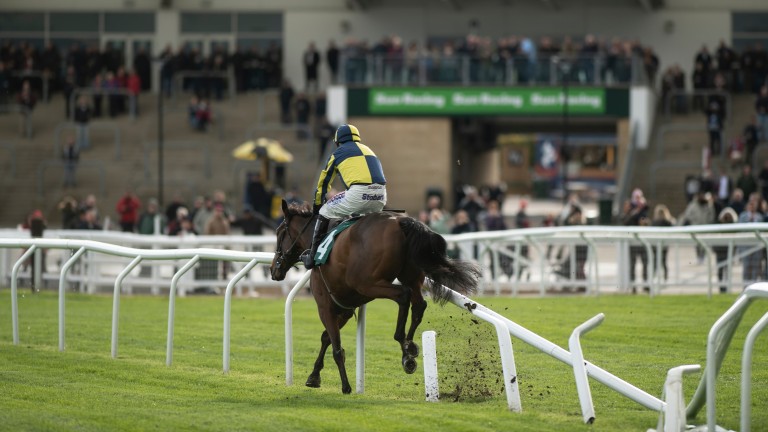 One For Billy crashes through the rails on the run-in
Edward Whitaker
1 of 1
By Bruce Jackson UPDATED 7:37PM, OCT 26 2018

There was amazing double drama as the jumps returned to its spiritual home at Cheltenham after One For Billy and Oighear Dubh both ran out after jumping the last with winning chances.

The two calamities left the course executive reeling and searching for answers before Saturday's meeting, which features three more chases where runners will face the troublesome taped-off section on the run-in.

Trainer Dan Skelton experienced the highs and lows of the two incidents and felt the height of the tape might have been the problem.

The trainer said: "It's been an unbelievable day. For this to happen twice in a day is no fluke, so something is wrong and something has to happen, and I know Cheltenham will do what needs to be done.

Skelton was first on the wrong side of fortune as One For Billy crashed through the tape when joining the trailblazing Diakali in the 2m novice chase, but then he was the beneficiary when Irish challenger Oighear Dubh ran out through the tape in the 3m1f handicap chase, which left Skelton's Sam Red to bring up the stable's 100 winners for the season.

The double drama brought back memories of the 2013 festival, when Oscar Delta looked set for Foxhunter victory until swerving into the temporary tape halfway up the run-in and unseating 19-year-old Jane Mangan, which handed the race to Salsify.

Following One For Billy's misfortune, Skelton said: "Poor Jane Mangan lost a Cheltenham Festival winner but we have lost a race – and for one of racing's great supporters in Paul and Clare Rooney, who I feel bad for losing a winner."

Cheltenham's clerk of the course Simon Claisse was shocked by the two incidents and is looking into what can be done for Saturday's meeting with his executive.

"There was a complete review involving the BHA inspector of courses after the Foxhunter incident and changes were made, but we need to have another look after today.

"The big problem we have is the time gap – there are only around two minutes after the horses clear the straight first time round the turn before they return, and that's not enough time to put in anything more permanent.

"Wider tape was considered for visibility but that causes problems in high winds."

FIRST PUBLISHED 5:26PM, OCT 26 2018
For this to happen twice in a day is no fluke, so something is wrong and something has to happen, and I know Cheltenham will do what needs to be done