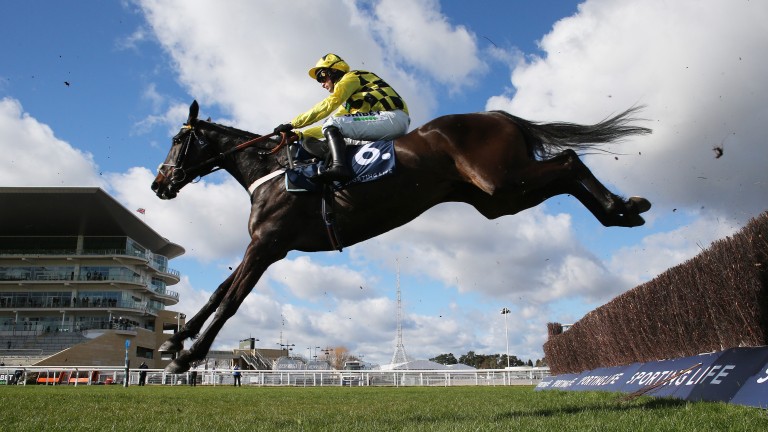 Fans of Shishkin, who may well be Britain's best chance of avoiding another championship whitewash at the Cheltenham Festival, will have to wait to see Nicky Henderson's stable star, who will bypass the Betfair Tingle Creek Chase at Sandown next week in favour of a crack at the Ladbrokes Desert Orchid Chase at Kempton on December 27.

Henderson, who trains the exciting seven-year-old for Joe and Marie Donnelly, stressed his two-time festival hero was not injured but had not quite reached the required peak for Sandown's prestigious Grade 1, for which he had headed the betting.

Chacun Pour Soi now occupies that slot, although Shishkin remains Betfair and Paddy Power's 7-4 favourite for the Betway Queen Mother Champion Chase at Cheltenham in March. Those odds make him the shortest-priced British runner for the meeting's four main events, which were all won by Irish horses last season. 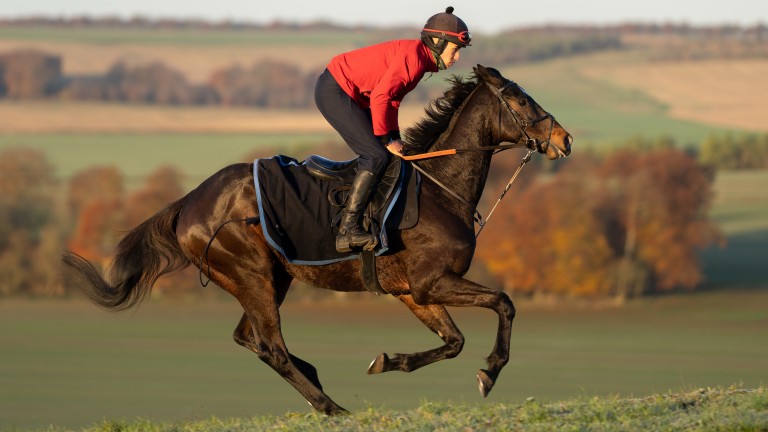 Shishkin and Jaydon Lee canter up the hill on a cold, bright morning at Seven Barrows
Edward Whitaker (racingpost.com/photos)

Shishkin, who won the 2020 Supreme Novices' Hurdle before capturing the Arkle in the spring under regular rider Nico de Boinville, has yet to find concert pitch this autumn, and Henderson feels a pre-season breathing operation and the dry weather in Lambourn, which has prevented him from using his grass gallops, are contributing factors.

"There's nothing wrong but Nico and I feel he's not quite there," he said on Wednesday.

"He's never been a brilliant work horse and that makes life quite difficult in assessing him, while I'd love to have been able to work him on grass and he wasn't ready to go to Newbury for their gallops morning last week.

"I'd have liked to have gone for that and if I could have got him there it might have been different, but he had a wind op over the summer and that sets them back four weeks plus, and I've probably been on the back foot ever since."

Henderson, who retired star two-miler Altior in September, added: "Shishkin just hasn't quite come, it's as simple as that. He had a brilliant summer and looks a million dollars now, as you can see from that Ed Whitaker picture on the front page of the Racing Post this morning from when he cantered on Monday.

"He's fit enough, but I just don't feel he's sparking enough and not quite giving us all the right vibes I'd like to see. He's not injured – we don't go cantering injured horses. He's all right, but Nico and I aren't 100 per cent happy with where he is and you can't go running them when they're like that.

"If I was to get him to Sandown on Saturday week I'd have to chase him and I'd have to ask if I could go to Newbury this weekend [to exercise him] and I'd be pushing it, and I don't want to." 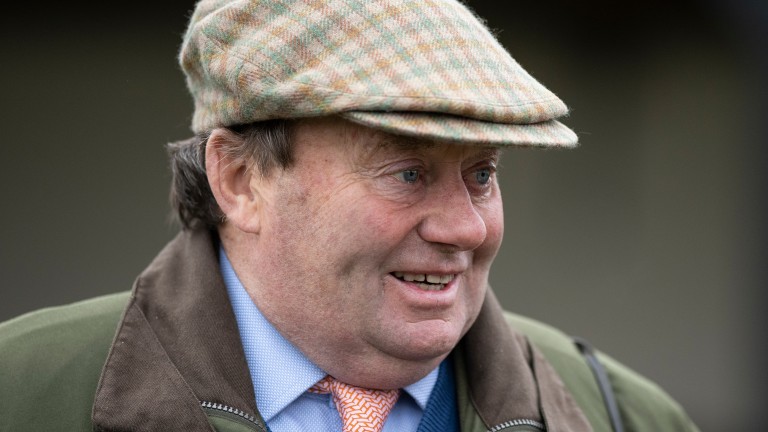 Nicky Henderson: "We wanted to be at Sandown, but it's not the right thing to do"
Edward Whitaker (racingpost.com)

Instead, Henderson is looking to the Desert Orchid for Shishkin's comeback.

"We probably won't gallop him this weekend and will just check everything out, but he's 100 per cent sound, while his wind is 100 per cent too," he said.

"We know what we're dealing with, and Joe Donnelly is fantastic and said, 'You know him and you do what's best for the horse'.

"And the best thing for the horse is not to get chased – I'd have to put the gun to his head a bit too much to get him there on Saturday week.

"It's better to take the decision now and give ourselves a chance to have him back for the Desert Orchid at Kempton.

"Getting him there isn't a worry, but he's just not where we want him to be at this moment."

Henderson hall of famers Sprinter Sacre and Altior were Tingle Creek winners for the six-time champion trainer, who added: "We wanted to be at Sandown, but it's not the right thing to do. I'm not trying to keep him for anything, but he's not where I want him and Nico feels the same.

"He rode him in work on Saturday and we've discussed it. It was all right – I've the film of that gallop and you'd hardly say anything was wrong – but he's just not there and it's difficult to assess him, especially as you're working on the all-weather, not the grass.

"I've no doubt a couple of bits of work on the grass would have perked him up as well as me."

Wednesday's news that Shishkin would miss next week's Tingle Creek Chase at Sandown did not exactly send shockwaves through the sport on a par with Vautour missing the 2016 Gold Cup. In fact, it caused little more than a rueful roll of the eyes and a torrent of social media jokes. It was all just predictable.

Nicky Henderson, of course, has history in this Sandown race, having withdrawn Altior on the eve of last year's running on the basis that the going – officially soft – wasn't right for his legendary chaser despite the horse having won six times on such ground. In Henderson's defence, these are different circumstances as he has given punters ample warning this time, revealing Shishkin's absence ten days out from the race.

But this has become a pattern of abundant caution that does the sport no favours. Racehorses are there to race, yet Henderson's do that rarely, especially outside his beloved Cheltenham Festival. For Shishkin this week, read Champ last week, Altior last year and numerous others in between.

In all cases, Henderson had his reasons for not running. But this sport needs its leading lights and, therefore, it needs its leading trainers to campaign boldly rather than insist on the stars always being perfectly aligned before sending them to the track.
Dylan Hill, premium editor

FIRST PUBLISHED 12:44PM, NOV 24 2021
He's fit enough, but I just don't feel he's sparking enough and not quite giving us all the right vibes I'd like to see

'There's more where this one came from' - Burke's juvenile peerage warning France Galop admits it did not want Christophe Soumillon at Longchamp Exeter's season opener moved to Warwick due to hard ground Christophe Soumillon defies call from owners before riding a winner at Longchamp 'Yes, I'll be there' - reluctant traveller Prescott set to end 21-year absence Ludlow's Wednesday fixture 'in the balance' with ground hard in places