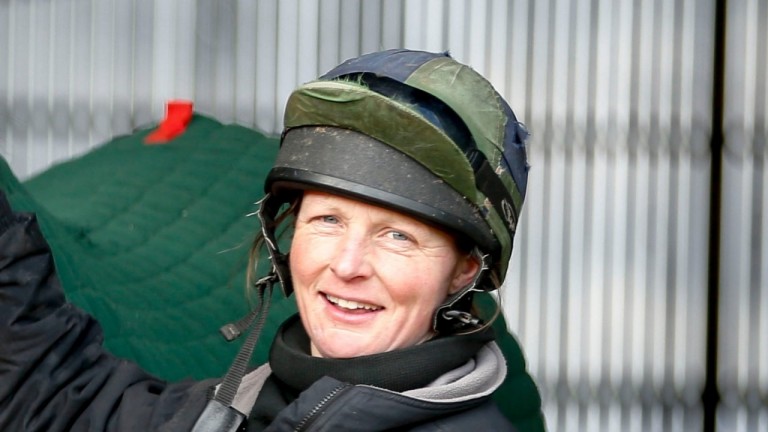 Gill Boanas: "She was a brilliant patient but it just didn't seem to be knitting together how we wanted it to"
Louise Pollard
1 of 1
By David Carr 2:00PM, JUL 31 2021

Oliver's Betty, whose trainer spent four nights sleeping in her stable to try to help her survive serious injury, has lost her fight for life.

The mare was put down this week as it became clear that her recovery from the fractured pelvis she suffered at Redcar in May was not progressing as well as had been hoped.

Gill Boanas, who made a bed for herself out of shavings as she nursed the six-year-old through the nights immediately after she sustained the injury, revealed that her vigil had ultimately proved to have been in vain.

'It was heartbreaking' - trainer's heroic efforts to care for injured horse

"After eight weeks the pelvis wasn't stabilised enough," the trainer said. "She was starting to have little gentle walks about but she had another little bleed around it. That seemed to settle but then she started not weight-bearing so well on the good leg and we ended up thinking it was just too big a break.

"She was a brilliant patient but it just didn't seem to be knitting together how we wanted it to. Within 24 hours she started to deteriorate a little bit, it was the first time she'd looked unhappy. We started to think there was maybe a little bit more going on than we could see as well. It was a tough decision but you've got to do it."

Boanas, who has been training at the Saltburn yard made famous by Mary and then Keith Reveley since 2016, was getting up early each morning after spending the night with Oliver's Betty and said at the time: "Sleep's overrated, isn't it?"

Reflecting on the decision to put her down, the trainer said: "It's the worst part of the job, unfortunately you have to deal with it. It was heartbreaking and I had a rough couple of days afterwards. She was such a lovely mare in every way and I thought she had a great future ahead of her, it was such a shame.

"It's the harsh reality of the job. We did everything we possibly could to try and save her and we thought we were progressing, but half a ton of horse with a break like that, it's hard – and you can't watch her and stop her moving 24-7."

Oliver's Betty had won at Ayr immediately prior to suffering her Redcar injury and Boanas had hoped to save her for breeding, even if her racing career was finished.

The trainer had previously nursed Broctune Red back from a similar injury and won four races with him.

FIRST PUBLISHED 2:00PM, JUL 31 2021
She was such a lovely mare in every way and I thought she had a great future ahead of her, it was such a shame