He didn't do anything wrong at all: Henderson defends Altior's jumping 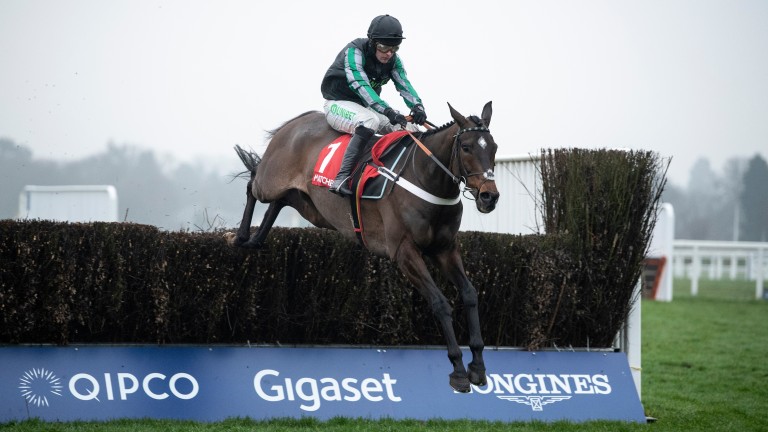 Altior jumps out to his left on the way to a 17th consecutive win in the Clarence House Chase
Edward Whitaker
1 of 1
By Stuart Riley UPDATED 7:01PM, JAN 20 2019

Nicky Henderson suggested on Sunday that people need to cut jump racing's biggest star Altior some slack, his jumping to the left at Ascot the afternoon before having sparked as much, if not more, comment as another imperious success.

Altior racked up consecutive win number 17 in the Grade 1 Clarence House Chase to set up the chance to equal the Big Buck's modern-day record of 18 at the Cheltenham Festival in March, and in Henderson's view his freakish talent is as much the reason for the examination of his jumping as the fact he occasionally goes left.

The champion trainer said: "The trouble with a horse like him, and I'm very grateful everyone is so interested in him as it's so lovely, but when they're as good as he is they're put under such scrutiny. If he so much as twitches everyone wants to know why.

"He didn't do anything wrong at all. It's a natural tendency for him and, as Nico [de Boinville] said, Special Tiara taught him to do it at Kempton in the Desert Orchid as he kept carrying him further out to the left.

"He was just dossing in front, he was doing absolutely nothing wrong and it's of no consequence whatsoever."

Cheltenham being left-handed means that even those who believe there might be consequences down the line will have no reason for concern come March, and while there is already ante-post betting on the King George VI Chase at right-handed Kempton in December, with Altior 6-1 favourite, it must be noted he has won 12 times going right-handed.

FIRST PUBLISHED 2:50PM, JAN 20 2019
When they're as good as he is they're put under such scrutiny. If he so much as twitches everyone wants to know why

Watch: trainer Nicky Henderson discusses his Seven Barrows stable stars 'I'm sure Champ is a Gold Cup horse - but we might have another one as well' 'He's one of the most exciting prospects we've had for a long time' 'The Tingle Creek is the first aim and the hope is that he's our next superstar' Fury and frustration but also an abundance of smiles on a vintage Champions Day Aldaary strikes at Ascot again as Jim Crowley completes 229-1 treble