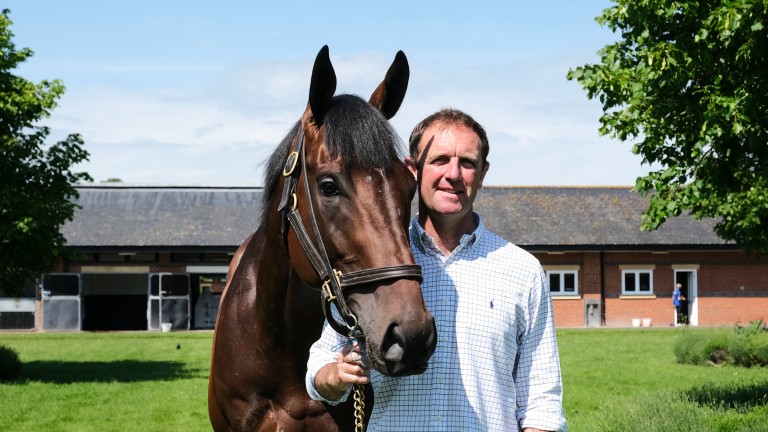 Charlie Appleby with his Derby winner Adayar at Moulton Paddocks on Monday morning
1 of 1
By David Milnes UPDATED 7:24PM, JUN 7 2021

Adayar, who on Saturday gave Charlie Appleby and Godolphin a second victory in in the last four runnings of the Cazoo Derby, is to attempt to be the first Epsom hero since Galileo 20 years ago to follow up in next month's Group 1 King George VI and Queen Elizabeth Qipco Stakes at Ascot.

Already handed an opening quote of 5-2 favourite by Paddy Power for the Ascot all-aged feature on July 24, the son of Frankel looked none the worse for having gone the "brave man's route" under Adam Kirby in Saturday's Classic when shown to the press at Moulton Paddocks on Monday morning.

Adayar, sent off a 16-1 chance, powered through a narrow gap on the rail to account for Mojo Star and stablemate Hurricane Lane on the famous Downs to back up the win of Godolphin's Masar in 2018.

Speaking in front of the Epsom hero's box at the vast Newmarket complex, Appleby said: "Adayar has come out of the Derby in great shape and we couldn't be happier with him. 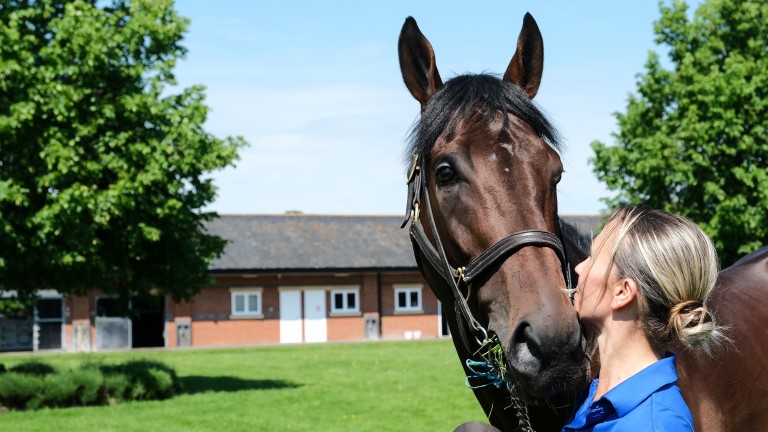 "He went on the Seawalker yesterday and has been for a jog this morning after which he was turned out in a paddock so the signs are good so far."

Despite the apparent wellbeing of his victor, Appleby is in no rush with the strapping individual. Adayar was having only the fifth race of his career at Epsom and possesses the scope to continue improving into 2022.

Since Galileo in 2001, only three Derby winners have tried to follow up in the King George, without success.

The trainer added: "Potentially, the plan is to give Adayar a bit of time and take him to the King George at Ascot. If he happens to win that then we'll be looking at working back from the Arc. If he gets beat we could well revert to our original plan of going the St Leger route."

Derby analysis: 'He's better than this', 'Don't give up on him', 'Eclipse next'

Discussing his other two Derby runners, Appleby is planning a trip to the Irish equivalent for third-placed Hurricane Lane, a 3-1 chance with Paddy Power, while One Ruler, who came home sixth, could have Royal Ascot on his agenda.

He said: "We were delighted with Hurricane Lane. He was still learning on the job and showed his inexperience and going into the race I thought he was probably one run short unlike Adayar who ran twice last year. We'll look to the Irish Derby with him. 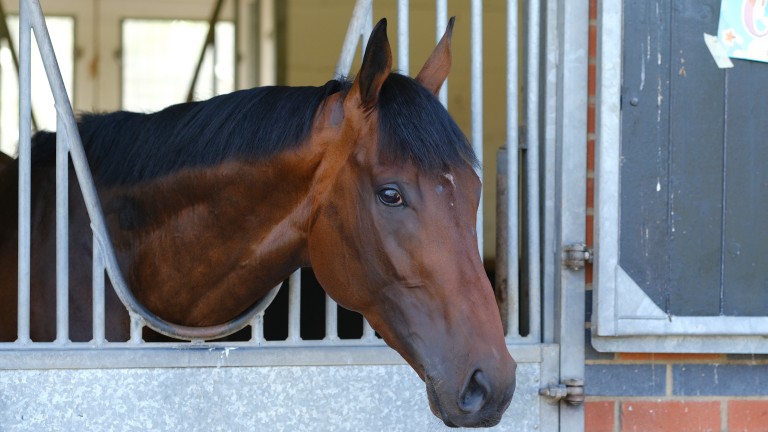 Adayar, who could have the Prix de l'Arc de Triomphe as his long-term aim, relaxing in his box at home

"James Doyle said that One Ruler didn't handle the track and probably didn't stay. We'll drop him back to ten furlongs in something like the Group 3 Hampton Court Stakes at Royal Ascot."

He said: "The conversation on the Wednesday evening with Sheikh Mohammed prior to the Derby was driven by the notion that through the winter we'd been trying to get as many as we could in the race as it's the race everyone wants to win.

"We had three still in there and I highlighted that Adayar may well be better when he steps up in trip and look towards Royal Ascot with him but the instruction was, 'There is only one Derby and you need to stay', which was the end of the conversation!"

Before the Derby, Appleby was happy with the stalls position of his three runners despite Adayar being handed the usually unfavourable inside berth of stall one. 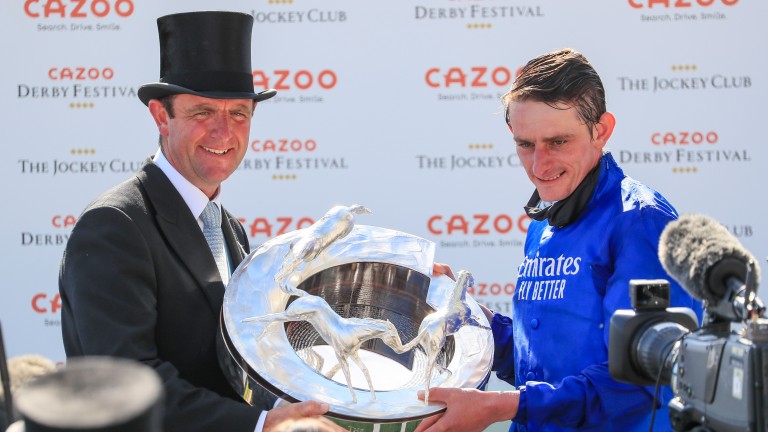 Charlie Appleby (left) on Adayar: "The way he's built there are not too many that are going to bowl him out of the way!"
Mark Cranham (racingpost.com/photos)

He added: "We had all three across the track in stalls one, five and 11, but Adam was pleased with his inside draw as he could get the revs up early doors to get him into a good rhythm. As soon as Adayar hit the front I was confident he'd put it to bed as he was always going to gallop strongly to the line.

"One thing that did surprise us was the acceleration that he showed. Adam went the brave man's route but he had a brave horse underneath him. The way he's built there are not too many that are going to bowl him out of the way!"

Appleby added: "It was a great weekend for Godolphin as a whole and Moulton Paddocks. Both Althiqa and Summer Romance were shipped over from Dubai for the race and it was a great result. We had hoped to take Rebel's Romance over for the Belmont Stakes but Godolphin won it anyway with Essential Quality."

Adayar, like Masar, was homebred by the Godolphin operation, a factor that the trainer, who took over the licence at Moulton Paddocks in 2013, was keen to emphasise.

He said: "I must say congratulations to his highness Sheikh Mohammed and also to the team over at Kildangan Stud in Ireland who have been trying for many years to breed a Derby winner but to have two in the past three years is a fantastic feat.

"Sheikh Mohammed puts so much into the game around the world not just here and it was a very rewarding success for the whole team here at Moulton Paddocks as well as Godolphin worldwide."

Adayar was a clear-cut winner of the Cazoo Derby and has the physical makeup of a horse who is going to keep improving, so connections are right to want to have a crack at the summer highlight with him. That said, I'm more sceptical of what he achieved at Epsom than some and let's not forget he was being considered for the Queen's Vase instead.

Given Adayar's strong-galloping nature, the long straight at the Curragh in the Irish Derby would have suited better than at Ascot, and with Epsom absentee High Definition the standout rival likely to be lying in wait in Ireland, there's little doubt the opposition would have been easier too, as the likes of Love, Mishriff or maybe even Snowfall (said to be heading for Irish Oaks instead) could be in opposition in the King George.

So all in all it's maybe no great surprise and I'd imagine it's an owner-driven decision, with the Godolphin silks having not been carried to victory in the King George since Doyen way back in 2004.
Mark Brown, Racing Post analyst

FIRST PUBLISHED 3:30PM, JUN 7 2021
If he happens to win that then we'll be looking at working back from the Arc. If he gets beat we could well revert to our original plan