With the Post returning in print, we look back on the newspaper's first day 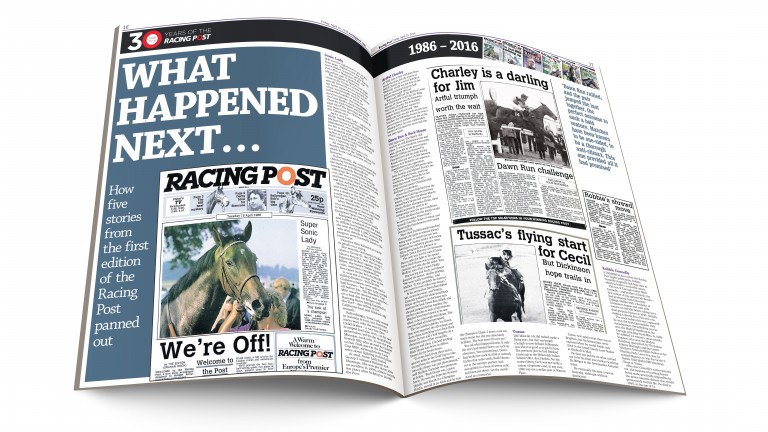 She was the right horse to put on the front page. Tipped to win the Nell Gwyn Stakes, trusted to get the Racing Post off to a flying start in life, she played her part to perfection.

The daughter of Nureyev had eight rivals in the Group 3 contest and was sent off favourite on the strength of her home reputation and the evidence of her seven-length stroll in an influential maiden at Ascot the previous autumn. Her main market rival was Embla, shock winner of the Cheveley Park Stakes and the front-page tip of The Sporting Life; there was more than the obvious at stake in this Classic trial.

And it was Sonic Lady – ridden by Walter Swinburn and trained by Michael Stoute for Sheikh Mohammed, who had paid $500,000 for her at the sales – who underlined her potential with a three-length defeat of Lady Sophie, with Ala Mahlik third and Embla only fourth. Racing Post 1 Sporting Life 0.

All roads then led back to the Rowley Mile for the 1,000 Guineas, for which Sonic Lady was sent off 6-4 favourite.

Unfortunately, she compromised her chance by becoming overwrought in the build-up and although she travelled sweetly through the race, taking up the running two furlongs out, she was outrun on the final climb and beaten into third by Midway Lady and her stablemate Maysoon.

Midway Lady was a stout stayer and would win the Oaks, and there was a doubt at the time over whether a mile was Sonic Lady's best trip – but she would soon prove it.

After Newmarket, Sonic Lady went on a winning spree that would lead to her becoming the top-rated European three-year-old filly.

Equipped with a Citation bridle and rubber noseband that did much to diffuse her headstrong tendencies, she won the Irish 1,000 Guineas, but only after details of her forgotten passport were hurriedly faxed to the racecourse.

Victories then followed as surely as pearls on a string. 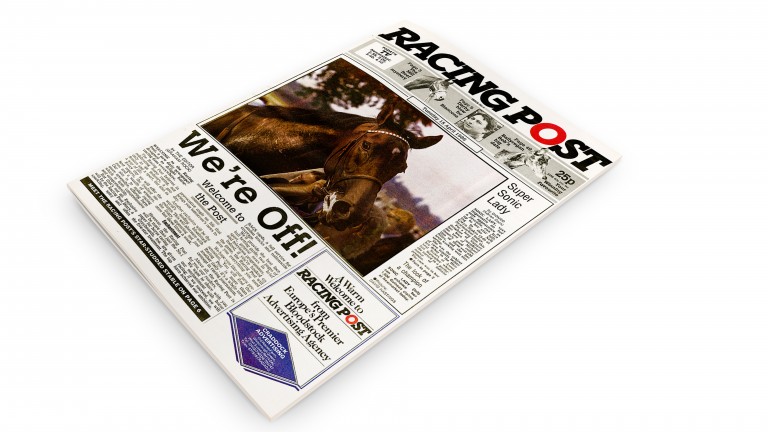 It was not a vintage year in the miling division – both British Guineas winners were mile-and-a-half horses – but Sonic Lady carried all before her. The Breeders' Cup Mile was the obvious next step but – on a bad day for Britain with Dancing Brave being humbled in the Turf – she wilted in the California heat and finished only seventh.

Refreshingly, Sonic Lady stayed in training at four, but from four starts won only the now-Group 2 Child Stakes – a race her dam Stumped had also won – as the new generation, led by the magnificent Miesque, took over. It was the great French filly who proved her master on her final start in the Breeders' Cup Mile, although Sonic Lady went down fighting in third place.

At stud, Sonic Lady foaled Group 3 winners Hazaam and Sharman. She was put down after an accident in 1996, almost exactly ten years after helping to launch the Post.

At the time it may well have been worth the wait, but the victory of Artful Charley in a novice hurdle at Wetherby would not put him on the path to emulating his great half-brother Burrough Hill Lad.

Burrough Hill Lad (by Richboy) won the Cheltenham Gold Cup, the King George VI Chase and the Hennessy, but Artful Charley (by Articulate) swam in far shallower waters for trainer Jimmy FitzGerald. That Wetherby win was his sole success over hurdles; the following season he won a poor contest at Carlisle over 3m on his chasing debut, but was comfortably beaten on his next two starts and was not seen again.

The light from 'The Match' still reaches us, still illuminates time and place. It was an inventive, innovative idea, given life by the great trainer Vincent O'Brien and fostered by Punchestown and the Irish Racing Board, who put up £15,000 between them to lure Ireland's two superstar steeplechasers into opposition.

The rest of the £25,000 purse came from Seamus and Michael Purcell, the owners of Buck House, and from Coolmore, where Dawn Run's sire Deep Run stood. Dawn Run's controversial owner Charmian Hill declined to contribute.

Given that Dawn Run had won the Cheltenham Gold Cup the previous month, a day after the Mouse Morris-trained Buck House had won the Queen Mother Champion Chase, there would necessarily need to be compromise over the race conditions.

It was decided that the match would be over two miles. Dawn Run's 'seconds' had the choice of venue, and chose stiffer Punchestown over easier Gowran Park.

More than 30,000 people marched through the gates to witness history being made, to watch the two best horses in a country with a rich racing heritage but enduring gloomy times bid to bring back the glamour to Ireland. Dawn Run was 4-6 favourite.

The only way for the stayer Dawn Run to take the fight to the speed horse Buck House was to make the running, and this she did under Tony Mullins, son of her trainer Paddy.

She was big and burly, and almost dwarfed the neater, smaller gelding. "We were really travelling," said Mullins. "It was probably the fastest I ever went for two miles over fences."

At the second-last Dawn Run shifted left, as was her wont, and Tommy Carmody pushed the white-faced Buck House up the inner on the home turn and into the lead. Dawn Run rallied, and the pair jumped the last together, the perfect outcome to such a bold venture. Matches have been known to be onesided, to be a thorough anti-climax. This one provided all it had promised.

The two landed upsides, but Dawn Run soon regained the advantage and drew clear, stretching out to beat Buck House by two and a half lengths. As a demonstration of her versatility, courage and class, it lacked nothing. Buck House was brave in defeat, beaten by the better horse.

"To come back from three and a quarter miles in the Gold Cup to take on and beat the reigning champion two-mile chaser was just phenomenal," said Mullins. Carmody was generous in defeat. "Buck House was a great horse. He won the Supreme Novices' Hurdle, was fourth in a Champion Hurdle, second in an Arkle and he won the Champion Chase. I never rode too many better but she was absolutely brilliant. The best mare I'll ever see."

You ask what happened next. If only the story had ended there, on such an afternoon. Two months later, Dawn Run broke her neck in a fall at Auteuil.

Earlier that same week, Buck House, out in the summer pasture, had succumbed to a bout of severe colic and been put down. Let the match stand as a memorial.

The Miswaki colt did indeed make a flying start, but that ten-length triumph at now-defunct Folkestone was about as good as it got for him. The previous year he had finished runner-up in the Molecomb Stakes behind 100-1 shot Hotbee, but his trainer Henry Cecil was not really a trainer of sprinters and, in any case, 1986 was not a stellar year at Warren Place.

Tussac won again next time out at Brighton, but his limitations were exposed when he could finish only third in the Listed Sandy Lane Stakes at Haydock in May.

He then ran poorly on what turned out to be his final start before fetching 26,000gns at the Newmarket Autumn Sales.

He eventually became a sire in Australia, although without distinction.

A trainer in form when the Racing Post began publication, Robbie Connolly tragically had little time in which to build a successful career.

The son of Curragh trainer Mick Connolly – and brother of Kevin, the first trainer of top sprinter Mr Brooks – had graduated from University College, Dublin with a Bachelor of Commerce degree and rode with success on the Flat before taking out a dual-purpose licence in 1985, initially making a decent fist of his new role.

The week before this story appeared he won the Irish Lincolnshire with Acclaimation; the following year he won the Madrid Handicap at the Curragh with Blue Eyed Miss. In 1988 he saddled 14 winners, most notably Viqueen, who won the Madrid Handicap (partnered by 7lb claimer Johnny Murtagh) and the Listed Northern Telecom Fillies Stakes at the Phoenix Park. Later that year he trained Mascara to win the Grade 3 Denny Gold Medal EBF Handicap Chase at Tralee.

After that Connolly's career petered out, the business of training horses being made practically impossible by the motor neurone disease that would prematurely end his life. He died in 1990, at the age of 31.