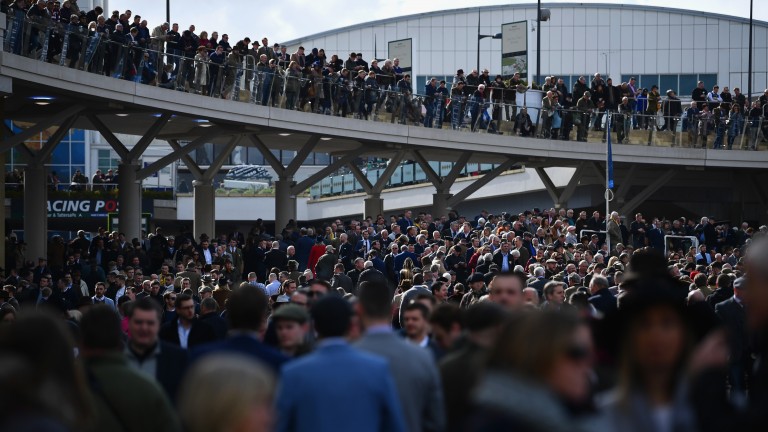 Cheltenham Festival: prospect of another 17mm of rain in the lead-up to the festival
Justin Setterfield
1 of 1
By Jack Haynes UPDATED 7:21PM, MAR 7 2019

The increasing likelihood of soft ground in the going description for day one of the Cheltenham Festival has sparked punters into life, according to bookmakers, with Coral not ruling out Native River being sent off favourite for the Magners Cheltenham Gold Cup.

A combination of good to soft and soft ground is the prediction for the opening-day description from clerk of the course Simon Claisse after 17mm of rain overnight forced the going to ease to good to soft, soft in places (from good, good to soft in places) on Wednesday.

The same quantity of rain is expected for the lead-up to the meeting, which starts on Tuesday, in what Claisse describes as an "unsettled forecast".

He said: “This is an unusual season as in contrast to most years much of the winter action has taken place on better ground than normal and yet now we could be heading into a soft-ground festival, which means punters and layers will be switching the focus to those runners with proven form in softer conditions.

“As a result, horses who head to Cheltenham having performed well in recent months may find their odds lengthening, while in contrast contenders who perhaps haven’t had their ideal going yet will prove more popular. 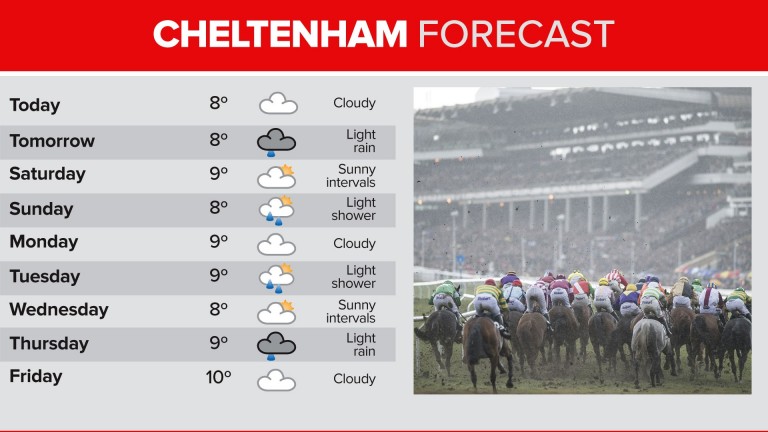 “There’s no more high-profile runner than Gold Cup winner Native River, who could be sent off favourite for next Friday’s showpiece if the going is soft.”

Pat Cooney of bet365 similarly pinpointed Native River as one likely to be supported as the rate of festival bets rose significantly on Wednesday with punters having a firmer idea about the ground.

Cooney said: “It’s usual when we go non-runner no-bet at the festival that we get many multiples linking horses with a definite ground preference, and many prefer to go with those who go best on soft ground, such as Native River in the Gold Cup.

“Today has been by far our busiest day for festival bets, and the rain has probably helped punters bet with more confidence, particularly as we're non-runner no-bet on all races.

“We’ve priced races up on the likelihood of ease in the ground, but, even so, it’s been manic in the office – and it will be throughout the days ahead.”

Rupert Adams of William Hill added: "The change in going will be a plus point for a number of horses, the most obvious of which are Native River and Laurina."

Claisse said: “We’ve had 17mm of rainfall overnight and 27mm since last Wednesday. We’re now good to soft, with a bit of soft.

“The overnight rain came as no surprise and the forecast over the recent period of time has been pretty much spot-on. The outlook remains unsettled with plenty more rain to come.

"The forecast suggests we could get another 17mm in the lead-up to Tuesday and, if it's correct, we should be looking at a combination of good to soft and soft ground on day one. The forecast is unsettled for the four days."

One trainer pleased by the prospect of more rain is Mick Channon, who runs Racing Post Arkle hope Glen Forsa and Mister Whitaker in the Ultima Handicap on the opening day.

Channon said: “We’re delighted the rain has come, and by the prospect of more, as it will play to the strengths of Glen Forsa and Mister Whitaker.

“The ground sorts itself out and it’s not something you should worry about, but any more rain would favour our horses.

“You don’t get any more competitive than Cheltenham, but I hope they have good chances.”

Glen Forsa shares favouritism for the Arkle with Lalor at around 4-1, with the wide-open nature of the contest convincing connections of the progressive Tom George-trained Clondaw Castle to supplement him for £8,500.

Also supplemented for a run on the first day of the festival was the Tom Lacey-trained Jester Jet, who was added to the OLBG Mares' Hurdle at a cost of £6,000.

Apple's Jade has been left in the Mares' Hurdle but is set to contest the Unibet Champion Hurdle, for which 14 remain.

Her trainer Gordon Elliott said: “The plan remains the same – she'll run in the Champion Hurdle.”

Fakir D'oudairies will try to become the first four-year-old to win the Sky Bet Supreme Novices' Hurdle since Hors La Loi in 1999, with trainer Joseph O'Brien confirming the festival opener the likely target for the JP McManus-owned juvenile.

Fakir D'oudairies is 6-1 joint-second favourite for the JCB Triumph, but O'Brien is set to run McManus's market leader Sir Erec in that contest and said: "It's looking like Fakir D’oudairies will run in the Supreme."

For the freshest betting advice, based on latest going and market conditions, don't miss the Live Tipster every afternoon. Just click Raceday Live at racingpost.com or on the mobile app

FIRST PUBLISHED 7:49PM, MAR 6 2019
We?ve priced the races up on the likelihood of ease in the ground, but even so, it?s been manic in the office, and will be throughout the days ahead

'What I remember most is the sadness; how it affected my mum, her crying'