No racing before next Wednesday as BHA announces six-day closure 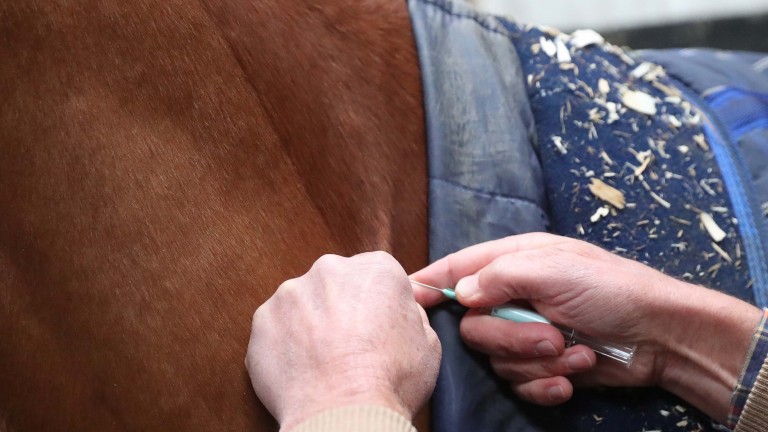 A horse at Iain Jardine's yard is injected with the vaccine as a precaution
John Grossick (racingpost.com/photos)
1 of 1
By Lewis Porteous and David Baxter UPDATED 10:23AM, FEB 12 2019

An outbreak of equine flu forced racing into a dramatic six-day shutdown to blow the biggest hole in the sport's programme since the foot-and-mouth crisis that put paid to the Cheltenham Festival in 2001.

Racing will not commence in Britain until next Wednesday at the earliest and a lockdown of more than 100 yards was enforced on Thursday as British racing's governing body took emergency measures to try to ensure the highly contagious virus does not spread.

Three positive tests for equine influenza were recorded at Donald McCain's yard on Wednesday evening, which in turn led to the cancellation of all of Thursday's cards in Britain.

The blanket ban means a total of at least 23 meetings will be lost, including Newbury's Betfair Hurdle card on Saturday.

A decision on whether racing can resume next Wednesday will be made by the BHA on Monday.

While the McCain-trained runners who tested positive were not on track this week, the trainer had runners at Ayr and Ludlow on Wednesday and Wolverhampton on Monday. Trainers who had runners at those meetings have been asked to provide swabs of all horses in their yards for analysis.

BHA chief regulatory officer Brant Dunshea addressed the situation on Thursday afternoon and said: "We've taken the decision to cancel racing in Britain until Tuesday inclusive in order to enable us to make a full assessment on Monday of whether we can return to racing on Wednesday.

"We haven't yet received the results from the samples that have been collected from the affected yard or any of the samples we've collected today from the potentially exposed horses from yesterday's fixtures.

"We know we're not going to be in a position, given the incubation period of the disease, to make a decision about returning to racing until first thing next week at the very earliest.

"We felt clarity for the industry was the most important thing at this challenging time. We will continue to risk assess over the course of the next few days. We have an industry veterinary committee meeting scheduled for later on Thursday evening where we'll be briefed by the current state of play by the Animal Health Trust."

Responding to the news, Newbury's chief executive Julian Thick said: "We're clearly disappointed, it's a major race meeting for us, but horse welfare comes first. We're as disappointed for the industry as we are for ourselves."

Asked whether the meeting could potentially be salvaged and re-staged, Thick added: "I think it's too early to say at this time. That's something we will be talking about with our sponsors, with some of the key trainers and with the BHA over the coming days.

"We're just letting all the customers who bought tickets, hospitality boxes and restaurant places the bad news then we'll get round to thinking about the future after that."

Looking further ahead, the loss of meetings could have an impact on running plans for yards looking to ready horses for the Cheltenham Festival, which is due to begin on Tuesday, March 12.

In 2001 the meeting was cancelled due to the foot and mouth crisis, but with over a month until this year's meeting there is hope a similar situation can be avoided.

A statement by Cheltenham read: "We are in contact with the British Horseracing Authority on this matter, who are handling it on behalf of British racing and providing regular updates. The festival isn't for five weeks and we hope that the BHA's early actions will resolve this matter quickly."

Thurles staged the only meeting in Ireland as scheduled on Thursday, and runners from Britain will not be permitted to race in Ireland until further notice.

What is equine influenza?

Equine influenza, sometimes referred to as equine flu or horse flu, is a highly contagious respiratory infection. An infected horse will show clinical signs similar to those of human flu and will be infectious for about a week. Tens of thousands of horses can be affected by one outbreak. Although rarely fatal, it can have a huge impact on competition and breeding due to restriction of horse movements.

The BHA was informed on Wednesday evening by the Animal Health Trust about the three confirmed cases at the McCain stable. With McCain-trained horses running in Britain this week that potentially exposed a significant number of horses from yards across Britain and in Ireland.

All racecourses that have had a McCain runner over the last three days have been requested to carry out a "deep clean" of their premises. BHA procedures state that a racecourse cannot race for at least four days following a deep clean having taken place.

Ayr and Ludlow confirmed the BHA had ordered a "level 2 deep clean" which requires the racecourses to disinfect all facilities where horses were prepared pre- and post-racing.

The outbreak was discussed in parliament on Thursday. Labour MP Conor McGinn called on the Department for Environment, Food and Rural Affairs to work with the racing industry on the issue as a priority during business questions to the Leader of the House of Commons Andrea Leadsom. 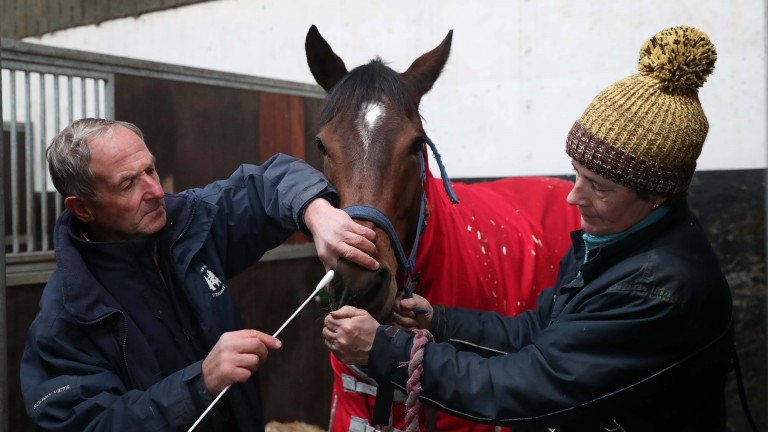 Cases of equine influenza had been reported in recent weeks, originally in France but spreading to Ireland and Britain. The BHA issued a warning to racing professionals on January 19 but, until now, no cases in Britain had been confirmed from active yards in vaccinated horses.

The Department for Environment Food & Rural Affairs said the decision to suspend racing had been taken solely by the BHA.

A spokesperson for Defra said: "The disease is not notifiable in the UK and there's no public health risk. At the moment the decision to suspend racing sits entirely with the British Horseracing Authority."

The Jockey Club Estate's schooling grounds in Lambourn have been closed to outside horses as a precaution, a move which was reciprocated for Newmarket's gallops.

FIRST PUBLISHED 4:21PM, FEB 7 2019
The full extent of potential exposure is unknown and we are working quickly to understand as much as we can to assist our decision making

Racing has its problems and it's up to racing to solve them Extra money - but less competition and lower crowds: the impact of more racing Communications director Martin Fewell set to leave BHA Whether you love it or loathe it, the Racing League is ready to roll the dice Danny Brock gets 30-day ban for breaking whip rules on one ride in seven in 2021 Buck stops with owners in welfare fight - so let's put a tax on prize-money
Bookmaker
Price
E.W. Terms
bet365
Open Account
Ladbrokes
Open Account
William Hill
Open Account
Coral
Open Account
Paddy Power
Open Account
Betfair
Open Account
Sky Bet
Open Account
Sporting
BetVictor
Boylesport
888sport