Farewell To A Champion LOOKING TO THE FUTURE 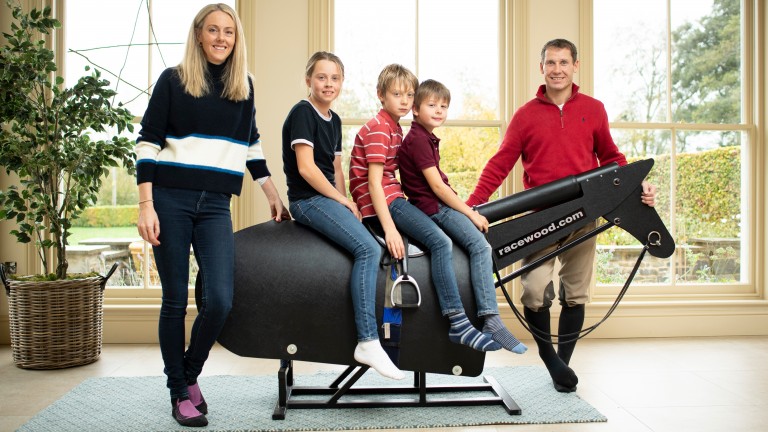 Richard Johnson was on Sunday looking forward to making up for lost time with his young family after bringing a stunning 27-year career in the saddle to a close the previous evening, but has vowed to remain closely connected to racing in the future.

While Saturday's shock announcement caught the majority of onlookers completely off guard, four-time champion jockey Johnson revealed the decision had been in his mind for a while, and he may well have chosen last month's Cheltenham Festival had Native River landed a second Gold Cup.

Instead, Brother Tedd, trained by his staunchest supporter Philip Hobbs, was the horse he bid farewell on, the duo finishing third in the 2m5f handicap chase at Newton Abbot.

"The family is the most important thing now, they come first," said Johnson on Sunday morning, insisting there were no regrets or downside to his decision.

"They’ve given up so much for me, I haven’t been around like a normal father would be for things like sports day. I want to be there for them and that’s my main priority. We have the farm at home and lots of horses.

"As a jockey, riding seven days a week, you just focus on that, you don’t really know what’s next after you stop riding. I’m a bit nervous but looking forward to a different daily routine." 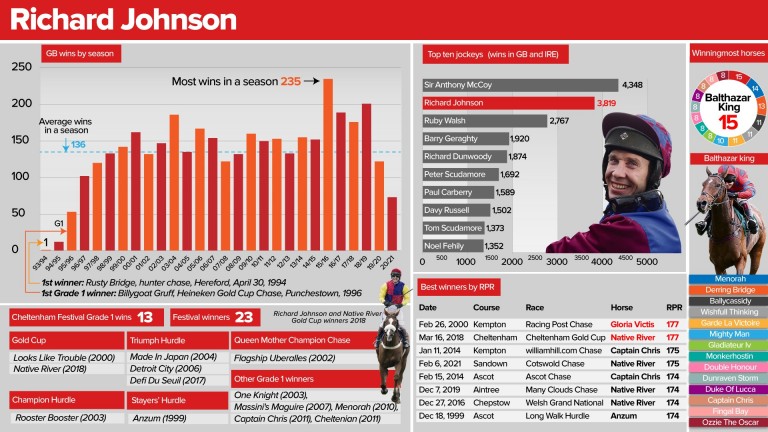 Although acknowledging life will be vastly different, he is keen to stay closely connected to racing and Hobbs's yard in Minehead in particular.

"The first thing I said to Philip after my last ride was that I’ll be going down to see him very soon," said the father of three. "I can’t ever imagine not being involved in racing. I definitely won’t be a trainer, but with the breeding side and my strong connections with a number of yards, I’ll certainly be keeping my eye in."

Johnson gave up his one remaining ride at Newton Abbot so he could end his career riding for Hobbs and the trainer who has stood at his side throughout his career was close to his thoughts on Sunday.

"I wanted my last ride to be for Philip," he said. "Him and Sarah have shown me such loyalty over the years, as has Henry Daly, and I will never be able to put into words how much that has meant to me."

The 43-year-old reached the pinnacle over jumps, winning two Gold Cups with Looks Like Trouble (2000) and Native River (2018), as well as a Champion Hurdle, Champion Chase and Stayers' Hurdle among 23 Cheltenham Festival wins. 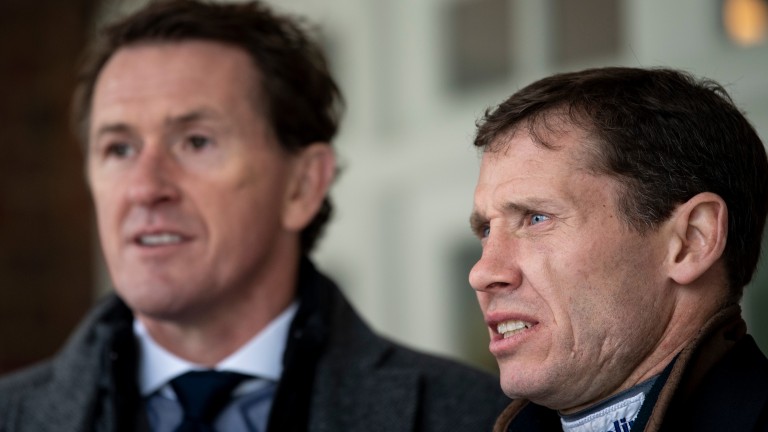 However, his career will forever be intrinsically linked with perennial champion jockey Sir Anthony McCoy and their fierce rivalry is something he is proud to be associated with.

Speaking to the Tote, he said: "I enjoyed riding against AP. He was a great jockey but he was also very fair. When you went upside him, there was no inch given but he was a very good man to ride against.

"He’s been a great role model for the generations growing up and he showed that if you work hard and give it 110 per cent every day, you will succeed.

"He helped me a huge amount and I hope I helped him because I wouldn’t let him coast along. Unfortunately I could never quite get past him!"

Ironically, Johnson won McCoy's last race before retirement at Sandown in 2015 on the same horse – Brother Tedd – who  sent him into retirement on Saturday.

"He’s a horse I’ll never forget," he said. "He’s not a festival winner, not a Grade 1 winner, just a lovely horse. That’s the thing, you have this immense connection with the horses. Some of them aren’t the best but you love them the same. It was an emotional moment when I gave him a pat after the race."

There was a further twist of fate on Saturday as Johnson's brother-in-law Mark Grant unwittingly chose the same Newton Abbot race to bring his own 23-year riding career to a close when finishing sixth on Count Meribel.

Johnson highlighted winning Cheltenham's 'big four' races among his highlights in the saddle, with his first Gold Cup winner Looks Like Trouble living out his days on Johnson's farm in Herefordshire, along with another of his Cheltenham Festival winners Menorah.

"To win the four big festival races within four years was the stuff of dreams, but I didn’t know how lucky I was," he added. "When you’re young you don’t understand, you think it will carry on forever.

"I really want to thank the entire racing community. I’ve had support from every angle, from Sedgefield to Newton Abbot to Cheltenham, and I feel very privileged to have had that. Thank you to everybody, I’ve loved every minute."

'He always pretended to be a jockey, it's all he ever wanted to be'

FIRST PUBLISHED 6:30PM, APR 4 2021
I really want to thank the entire racing community. I've had support from every angle and I feel very privileged to have had that