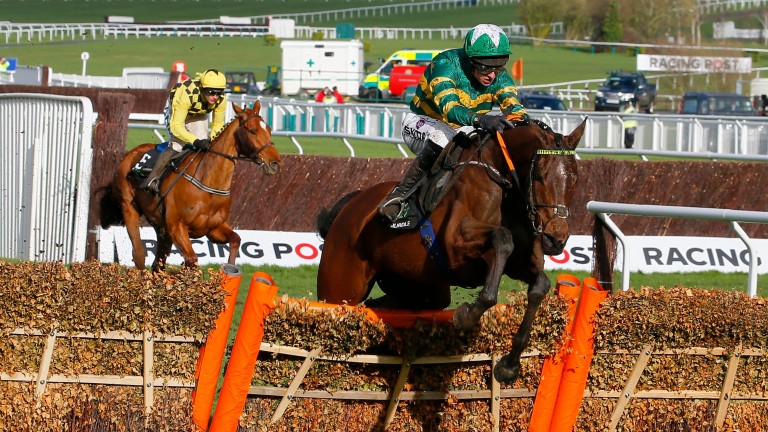 Espoir d'Allen: not a single cent was placed on the horse for last season's Unibet Champion Hurdle with Paddy Power under late December
Mark Cranham
1 of 1
By David Jennings UPDATED 7:49PM, AUG 23 2019

The brilliant Champion Hurdle winner Espoir D'Allen has died at the age of five, with jockey Mark Walsh hailing him the best horse he had ever ridden.

Espoir D'Allen made history at Cheltenham in March when his 15-length victory in the Champion Hurdle was the widest winning margin in the history of the race. In doing so, he became only the second five-year-old in 33 years to take the hurdling showpiece at the festival.

After spending his summer at Martinstown, Espoir D'Allen returned to Gavin Cromwell's stable this month but suffered a shoulder injury after getting spooked and rearing over following a routine canter a fortnight ago.

The extent of the injury was not initially known and Espoir D'Allen was sent to Fethard Equine Hospital for treatment where a decision was made to put him down on Friday.

Cromwell said: "It is with great sadness that we have to announce that Espoir D'Allen had to be put down earlier today. Following a freak accident two weeks ago, he was relocated to Fethard Equine Hospital. John Halley and his veterinary team deemed that it was inhumane to persist with treatment and, on their advice, we made the tough decision."

Walsh, who was on board for three of Espoir D'Allen's wins including his runaway Champion Hurdle victory, said: "It is a sickening day for everyone concerned. He is only a five-year-old and he holds the record in the Champion Hurdle by winning it by 15 lengths. He could have been anything."

He added: "It is very sad for JP and Gavin and everyone in the yard. Words can't describe the way everyone is feeling. He is the best I have ridden without any doubt."

Espoir D'Allen won nine of his ten starts and went through last season unbeaten with three Grade 3 victories, two at Naas and the other at Limerick, setting him up for a crack at the Champion Hurdle which he won at 16-1 under Mark Walsh.

He was as short as 3-1 in ante-post betting lists to retain the crown he won so impressively last March in 2020 before his setback earlier this month saw him removed from the market, with Klassical Deam taking over favouritism.

Frank Berry, racing manager to owner JP McManus, said it is a bitter pill for everyone involved with the horse to swallow, especially given his age and all he might have had to offer going forward.

Berry said: "It is very tough on Gavin and the whole team. It is very disappointing as he was only five and he had never run a bad race in his life.

"It is a shame it has happened but it is part and parcel of racing unfortunately."

It was billed as a three-way tussle between the defending champion, the mighty mare and the next big thing. Few could contemplate anything other than victory for Buveur D'Air, Apple's Jade or Laurina. Someone forgot to tell the only five-year-old in the field. Mark Walsh took his time on Espoir D'Allen and picked them off one by one. He hit the front on the home turn and powered clear to beat Melon by 15 lengths. It earned him an RPR of 171.

It was only a Grade 3 and there were only five runners but it did contain the previous year's Triumph Hurdle winner in Farclas and the 145-rated Stormy Ireland. Espoir D'Allen was sent off at odds of 7-2 under Jody McGarvey and he quickened clear approaching the final flight to put the race to bed in a few strides, winning by eight lengths. It was a real sign that we could have a star on our hands.

Having landed a Grade 3 at Fairyhouse earlier that December, Espoir D'Allen stamped himself down as a top-notch juvenile and he confirmed that suspicion with a thoroughly professional display under Mark Walsh. The 1-2 favourite had too many gears for Farclas with the useful Mitchouka back in third. Espoir D'Allen didn't make it to Cheltenham for the Triumph Hurdle but the form was franked by Farclas, who won the juvenile championship.

Early Cheltenham clue? Gypsy Island 20-1 for 2022 festival after comeback win High-class Broome continues perfect start to season in Mooresbridge Stakes 'Every day for a year I thought about doing away with myself - I'd given up' Fahey looking forward to getting Gypsy Island back on track at Tipperary Closutton to the fore as Irish champions are crowned at Punchestown 'It's lovely to do this for her' - Lorna Brooke remembered on hunter chase night