Watson has work to do after being handed first start

Texans and Bengals have to recover from dismal defeats 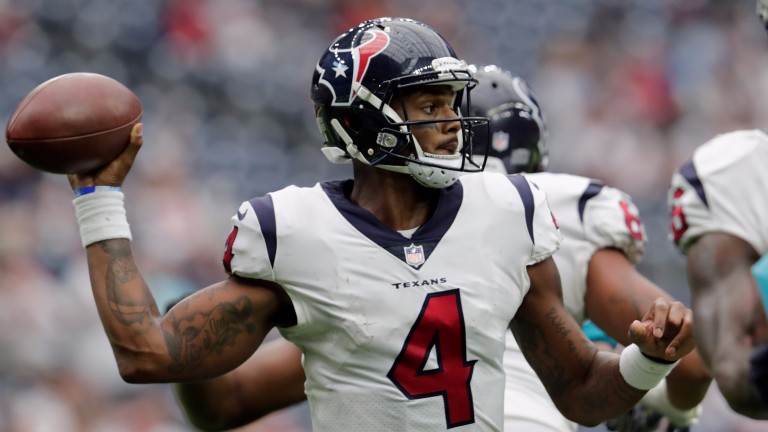 Houston and Cincinnati will be delighted to start Week Two a few days earlier than everybody else after their dismal opening efforts on Sunday.

The Texans allowed their quarterbacks to be sacked ten times in a 29-7 home loss to Jacksonville and any hopes they had of allowing rookie DeShaun Watson to ease into the job were erased when he was thrown into the deep end as Tom Savage's replacement after just two quarters.

The only way is up and the same could be said of the Bengals, who were unable to get a point on the board in front of their own fans against AFC North rivals Baltimore.

So at least the pair have had to wait only a few days to rectify the situation.

Watson, who was drafted 12th overall this year, has been given the opportunity to start having given the Texans some hope early in the second half before throwing two interceptions.

However, a short week to get to grips with the burden of starting is not ideal and he won't be helped by the fact that tight end CJ Fiedorowicz, who was tipped to have a key role in the Houston offence this season, suffered a concussion against the Jaguars and is out for a while.

They are already without receiver Will Fuller, who broke his collarbone in pre-season, so Watson doesn't have many options to work with.

Cincinnati's Andy Dalton had a terrible start to his seventh season as an NFL quarterback, throwing four interceptions against the Ravens and it seems realistic to expect some sort of improvement.

However, the pressure is on. After five successive exits from the playoffs at the wildcard stage, the Bengals were expected to kick on last season but finished with just six wins and it could be a tough season judging by what happened on Sunday.

Their defence wasn't disastrous as they held Baltimore to just 268 yards and most of their problems were self-inflicted, which is something layers have latched on to as they have gone from three-point to 6.5-point favourites.

Houston beat Cincinnati 12-10 last season and this looks set to be another tight encounter, which explains why the points line is just 38.

With a patchy, scrappy game likely and the quality the Texans possess in defence, it makes sense to side with the visitors in receipt of 6.5 points as they can remain competitive, but it is difficult to be confident about either team's chances.

Team news
Houston
Tight end CJ Fiedorowicz is out with concussion and receiver Will Fuller has broken his collarbone. Linebacker Brian Cushing and receiver Bruce Ellington all suffered head injuries in the defeat to Jacksonville.

Key stat
Houston have won seven of their last eight games against Cincinnati.