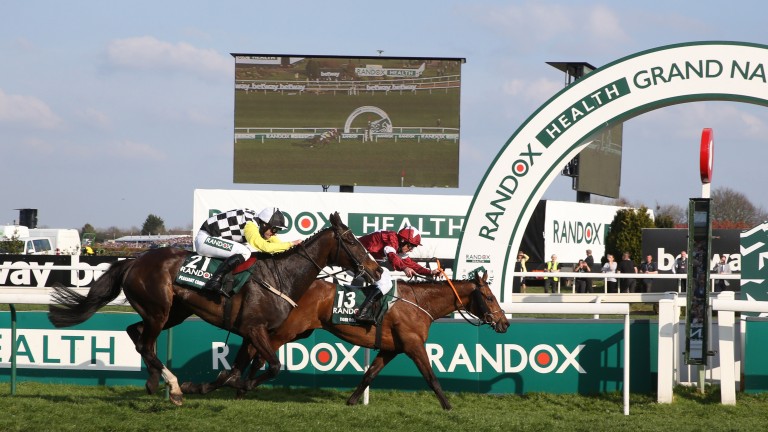 Everything changes all the time. Imagine being 80 (maybe you are), or 109 (you're probably not) like festival aficionado Ralph Hoare. You've just got to keep going on with it. There's no point moaning about the scarcity of gas lights, proper world wars or plain cheese rolls.

Still, you get the odd twinge. Take the current world. It makes you pine for Reagan v Chernenko and the poll tax. You might have been haunted by the spectre of obliteration or being prosecuted by the council, but at least you knew where you stood. With this lot running things, no-one has a clue what's going on.

In the spirit of nostalgia, let's wash up the Grand National before peering into the dazzling future. You've seen the race, and fine it was, despite the lack of hardcore fences and unhappy landings. But who saw the virtual version? It's still on YouTube:

And the whole programme is on the ITV Hub, that semi-promised land where questionable TV never ends.

"Can a computer outwit those of us who occasionally pass ourselves off as racing experts?" asks Nick Luck, needlessly self-effacingly. The computer has complex algorithms (everyone knows what that means, right?). To aid it, drones have examined the fences, which keeps the little gits out of the flightpath.

"They've altered the course. They've shortened it since our old day," says Pitman. "But you know, that's gone. I'm looking to the future, Nick!" You can just make out virtual pixies of the 22nd century dancing around his eyes.

"The computer's got brains," says Pitman, buying in a bit scarily. You know what he thinks he means.

The work of the graphic artists looks about as exciting as assembling those stop-motion Aardman animations. But despite the temptation to give up and go for a pint, which absolutely everyone else would, they did it. And the result is realistic, apart from the pull-ups, which are emergency stops.

You'll certainly wish you had bet on the winner, as it was Tiger Roll. He chomped up the ground Arazi-style to nail Chase The Spud. You can't argue with that, even if the others in the frame were wrong. Mind you, they got six of the first ten last year and it must be harder than doing a sprint at Southwell.

Assuming the handicapper doesn’t hit him too hard, we’ll be aiming Chase The Spud at the 2019 Virtual Grand National

Vicki has a point though. However realistic, virtual sport can be boiled down to the complex algorithms. It looks a bit better than the good old RP Predictor, sure, but it's essentially doing the same – rendering data as a cartoon.

The virtuoso skills employed at such as Inspired Entertainment, Inc, who produced the Nash, are in demand from firms who want you to actually bet on this stuff. It's a different world. Virtually.

Meanwhile on YouGov (latest: Do you have a distinct 'summer wardrobe' of clothes that you keep out of sight during winter? 56 per cent say no!) the Grand National has a -21 positivity rating (Donald Trump is -63 and Jeremy Clarkson -5), but more think it's 'okay' or better than not.

A poll before the race asked people if they would be placing a bet. 51 per cent said definitely not. In true pointless YouGov style, you can view results by demographic. This is interesting, in the same way that the ingredients of a banana are (and let me tell you, you wouldn't eat one if you knew what was in it).

SNP supporters are most likely to have a gamble; residents of Scotland in general aren't so sure. Sounds familiar. Men are more inclined than women and people in Wales and the Midlands are marginally the least keen. You get the picture. It's unclear.

Everything changes, not just the National. Rebirths can be painful, but has there been one moreore excruciating than ParisLongchamp's? As tipster and only-rarely-commentator-on-racecourse-names Paul Kealy (@PaulKealyRP) said, "ParisLongchamp? Not quite as sickening as The Racecourse Newbury, but still shite."

Another LG, Henri Martini, just says "Hippodrome mytique", which Google loses in translation as "mythical racecourse". Andre says: "Very nice, functional. Too bad the stands are subject to the four winds." And Serge Dupre says: "It's not terrible." Which is about as much as you can ask.

ParisLongchamp itself is a bit coy. It hasn't got a site, although it is on Twitter (@paris_longchamp). You can read about it at France Galop and when you see the admission prices, the four winds don't seem at all offputting.

Newbury's junior partner in crime, the Racecourse Beverley, is still at it. Incidentally, the site majors on 'Bygone Beverley Raceday'. They're offering a trip back to May 7, 1960 – virtually – with "tic-tac challenges and demonstrations, exotic and outlandish animals, traditional rides and side stalls, and a host of characters from the day to delight and surprise you".

There's even a fashion guide (ladies) although it's not on the Beverley YouTube channel. They haven't uploaded anything there for three years. Bygone days.

Never mind looking to the future, or the past. How about looking at the future? foalpatrol.com is good for that. It's a series of static cameras trained on mares with their foals – except often the mares and their foals aren't there, and there's nothing to see except the wind rippling the leaves at Three Chimneys or Gainesway. Now that's relaxing.

FIRST PUBLISHED 6:00PM, APR 21 2018
The work of the graphic artists looks about as exciting as assembling those stop-motion Aardman animations