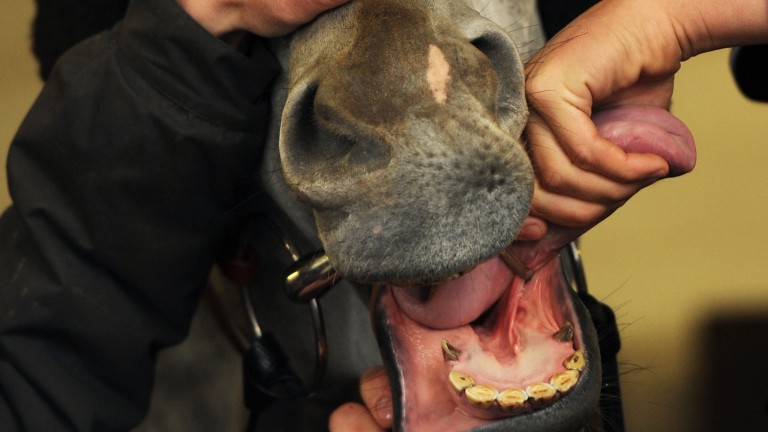 A tongue tie being applied: a practice being outlawed in Germany
Vince Caligiuri
1 of 1
By Jon Lees UPDATED 4:39PM, JUN 1 2018

Horses will from Friday no longer be allowed to run in a tongue-tie in Germany after the practice was banned as a result of animal welfare concerns.

Their use was already forbidden in other equestrian sports in the country before the change was applied to horseracing.

The information has been circulated to trainers in Britain through the National Trainers' Federation and BHA.

The ban follows a decree from the ministry of agriculture in North Rhine-Westphalia and, with other states set to follow, German racing officials have applied it across the country.

Rüdiger Schmanns, director of racing for German Racing, said: "In all other equestrian sports in Germany the use of tongue ties is banned – racing was the last equine sport which allowed tongue ties.

"With growing animal welfare activities, especially in Germany, there was no possibility of allowing the use of tongue ties to continue."

Tongue ties, or straps, are in regular use in Britain. A strip of material is applied over the tongue and tied under the chin to prevent a horse getting the tongue over the bit, which would make him or her difficult to control. They have to be declared and are checked by a veterinary officer and stewards.

There are no plans to follow Germany's example, and a BHA spokesman said on Thursday: "Tongue ties have been discussed on a number of occasions by our veterinary committee and meetings of our team of veterinary officers, but no proposal to ban them has ever been carried forward from either of those groups."

The change is unlikely to impact on the number of runners Mark Johnston sends to Germany.

His son Charlie said: "We're among the very small population that don't use them at all. In all the time I've been here I can't remember us using them. It won't affect us."

NTF chief executive Rupert Arnold said: "It is quite an interesting development. The background to it seems to be welfare concerns in Germany. I think most trainers here will have got the message."

FIRST PUBLISHED 6:41PM, MAY 31 2018
With growing animal welfare activities, especially in Germany, there was no possibility of allowing the use of tongue ties to continue