Time for racing to accept the inevitable: the whip will have to go

There have been many brilliant ideas kicking about on this website and the wider racing world this week as the Racing Post wonders how to make racing more popular. The ideas have ranged from the conservative to the radical to the bonkers, but they paint a picture of a sport in solid health and ready to meet the challenge of the future with optimism and enthusiasm.

Yet there has been one blind spot in the conversation I believe must be raised since it is so central to the future prosperity of racing: the public perception of the sport, specifically the welfare of its equine athletes and the morality of whipping animals in the pursuit of victory.

Anyone who pays attention to societal attitudes can see clearly that the current direction of travel is leading to a point where the majority sees use of the whip as unacceptable. See how attitudes have changed over the past two decades to fox hunting, circus animals, zoos, aquariums and battery farming. It is inevitable that the same moral tide will eventually lead, one way or another, to the end of the whip as anything but a safety tool.

Before going any further, I wish to clarify one point: I have no personal desire to see the whip banned. I do not believe it is cruel and I do not believe there is an urgent welfare reason for it to be banned. I'm sure most of this website's readers share those views.

Yet why do we hold such views? There is no concrete evidence to support them. We hold them, I think, for two reasons. First, because they are espoused by racing professionals whose opinions we respect and trust; we know that most jockeys and trainers are animal lovers. Second, because, deep down, we must admit that in this matter we are biased: we do not want to believe the sport we follow or participate in is capable of causing animals suffering. 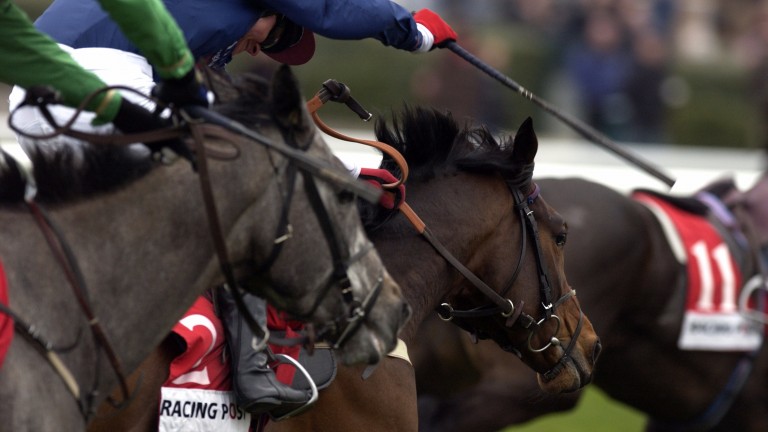 The whip: vital for safe racing or a stain on its image?
Edward Whitaker

Now consider that most of those who see a horse being whipped in the heat of a race have no such bias in favour of the sport. All they see is the appearance of violence being inflicted upon animals, a sight that is otherwise as alien to modern life as freak shows and madhouses and to many just as abhorrent. The perception is appalling; it is of a sport that punishes its heroes.

I believe that perception is visceral, widely held (especially among young people) and fundamentally wrong. I also believe it is all but impossible to challenge. Those who suggest educating the public have not grasped the seismic impossibility of a small sport like racing getting the public to even listen to such a message, never mind change its opinion. And we are entering a period of human development where the truth matters far less that a narrative that gets shared on Facebook. "A lie can travel halfway around the world while the truth is putting on its shoes," Mark Twain said, and they didn't even have memes back then.

I know this is a viewpoint unpopular in racing. I understand that many will reject it out of hand. Some will be angry the idea has even been broached. Yet this message is rooted in one thing alone: a desire to see racing succeed and prosper into the far future.

Use of the whip for encouragement need not be banned tomorrow or next year, but I believe the sport must acknowledge the societal forces that mean such an outcome is inevitable and begin planning accordingly. It is better to approach this willingly instead of being forced into it one distant day when back against a wall, the sport's reputation already irreparably damaged in the eyes of millions. We should begin, as soon as possible, by banning use of the whip for all but safety reasons in two-year-old races and in apprentice or conditional races.

For those that are unmoved by this argument, I ask only this: what would really happen if the whip was banned as a coercive tool? Would the sport suffer? Would the spectacle be diminished if a thrilling finish was fought not with whips slapping into the hindquarters and flanks of tired horses, but with hands and heels, nothing but man and horse united?

No. Racing would be just fine. In fact it would be strengthened. Ban the whip before the public turns on the sport and racing's image will be bolstered and its future safeguarded. Wait until it's too late and the damage will run more than skin-deep.

Has the Jockey Club brought forward its misguided plan to close Kempton? I only ask because the racecourse's website, which might be expected to make a big deal of its prize race, the King George VI Chase - the most prestigious jumps race outside Cheltenham, barely mentions it.

In fact, so devoid is the website of King George references that even if you go on the track's fixtures and tickets section, which offers a calendar stretching through to July 2018, there is no mention of the race. Click on December 2017 and a message appears reading: "Sorry, no events currently scheduled for this month."

It beggars belief that a major track run by a vast racecourse conglomerate like the Jockey Club could be so negligent as to make no mention of its biggest race, highlight of one of the sport's most famous meetings, just five months before it is run. Contrast this with Cheltenham, also Jockey Club owned, which not only prominently advertises next March's festival on its website, it even hiked the prices up this week.

At least local fans of Kempton will not be entirely devoid of entertainment in December. The track's website does report one non-racing event for King George month: an antiques fair on December 12. Can't wait.

FIRST PUBLISHED 6:00PM, JUL 6 2017
The perception is appalling; it is of a sport that punishes its heroes