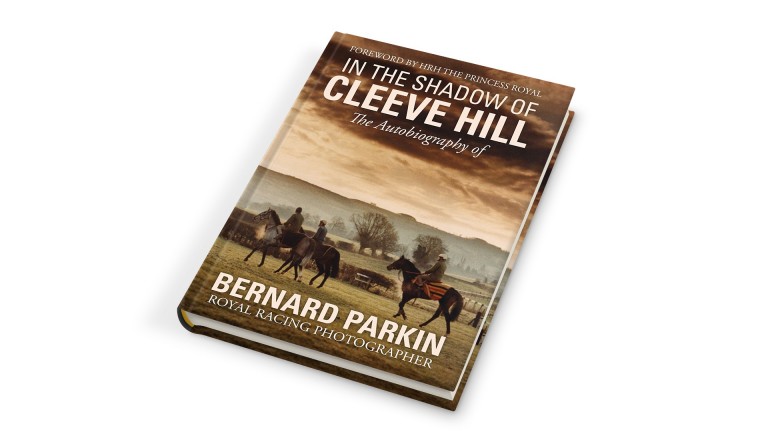 In the Shadow of Cleeve Hill – The Autobiography of Bernard Parkin, Royal Racing Photographer
Published by Pitch Publishing, £30

No-one could be better equipped to record and shed light on racing over as great a time period as Bernard Parkin and, as is revealed in his hugely enjoyable autobiography, few surely could do it with such passion and enthusiasm.

His story is not purely about Cheltenham or racing, but as someone born in the town and whose home has always been within a "short canter" of the racecourse, Parkin quickly became obsessed with horses.

Although he appears to have missed the opportunity to take photographs when he attended Golden Miller's last three Gold Cup wins, that can be forgiven. The now 91-year-old author was aged four, five and six at the time and his lens has missed hardly anything since.

Having had himself and his prospects pilloried by a teacher, Parkin swiftly began proving Mr Chubb wrong, first by lampooning him in a cartoon on the blackboard, then by jettisoning school for his first job aged 14.

Further developing his skills in drawing and photography brought careers in industry and racing, and although it was an encounter with the longest legs in showbusiness on a beach in the south of France which resulted in his first commercial photographic enterprise, his headline post in that profession – by not entirely linear progression – has been as Racing Photographer to the Queen Mother, then the Queen, both by Royal Warrant.

Living until 101, with her love for racing undimmed, the Queen Mother must have been a good customer, but she was so much more than that to Parkin as well as to the sport, as he describes movingly.

Some of the most fascinating stories in the book are those which lie behind the taking of certain photographs, and although snapping for the royals for 55 years was the greatest honour and privilege, it did not come without difficulty.

Take, for instance, the Queen Mother's 1994 Christmas card. How the photographer fulfilled his responsibility for securing the right pose, as well as the safety of one so beloved by the nation, while she was standing closer than planned to a somewhat fractious racehorse is a great scene-setter for the chapters which follow.

In a book full of entertaining vignettes and beguiling details, those I particularly enjoyed included evocations of Prestbury as a training centre and of the Prestbury Park racecourse in Parkin's early years, Terry Biddlecombe's last ride, the exuberance of Sheikh Ali Abu Khamsin, the art of horse portraiture and behind the scenes at Royal Ascot in 1974.

A multitude of racing celebrities are included but the racing figure probably nearest to the author's mind is someone perhaps unheard of by younger racegoers. It is the jockey Mick Pumfrey, Parkin's closest friend, who died after a fall at Newton Abbot in 1959.

What transpired at Becher's Brook during Red Rum's 1977 Grand National provides one of the funniest scenes in the book, but Parkin witnessed tragedy there on other occasions and campaigned for changes to what the Queen Mother described as "that foul Becher's" and to all the National fences.

The pictures used in that campaign are not reproduced. Neither is this merely a greatest hits compilation from his acclaimed career. Instead, the photographs, cartoons and other drawings combine to illustrate his life and times – and what a life it has been.

Bernard Parkin may have spent the vast majority of it in the shadow of Cleeve Hill, but he has helped to bring the sport he loves into the sunlight, including with this book.

FIRST PUBLISHED 6:00PM, SEP 18 2021
The photographs, cartoons and other drawings combine to illustrate his life and times – and what a life it has been

Foul weather and a right couple of turn-ups, what more could jumps fans ask for? Champion Hurdle alert: amazing Honeysuckle 'could still be improving' A potted history of modern jump racing and its toughest champions The plot against gambling: how a powerful lobby is out to change betting forever Likely weekend winner looks the one to beat for Cheltenham target at 9-2 Denman: 'He could pick you up and chuck you out the box or take your arm off'
Bookmaker
Price
E.W. Terms
bet365
Open Account
Ladbrokes
Open Account
William Hill
Open Account
Coral
Open Account
Paddy Power
Open Account
Betfair
Open Account
Sky Bet
Open Account
Sporting
BetVictor
Boylesport
888sport