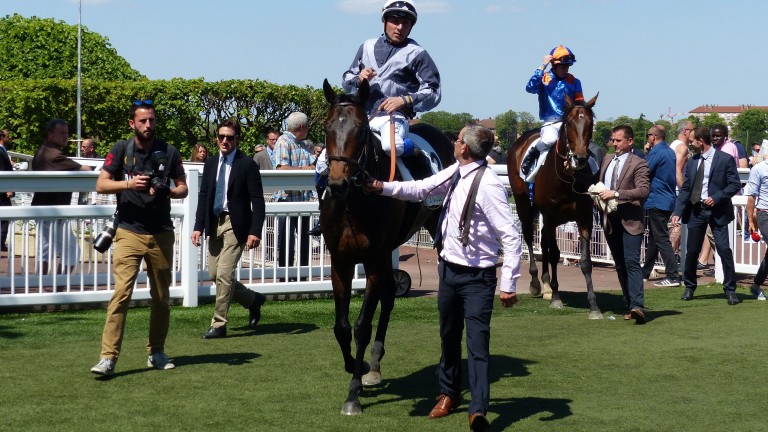 Study Of Man and Stephane Pasquier return to the Saint-Cloud winner's enclosure after landing the Group 2 Prix Greffulhe
Racing Post / Scott Burton
1 of 1
By Scott Burton 4:06PM, MAY 8 2018

The Investec Derby and Qipco Prix du Jockey Club will come under the most serious consideration for Study Of Man, who overcame a pedestrian early pace at Saint-Cloud on Tuesday to surge into Classic contention.

Long held in high regard by trainer Pascal Bary and owner-breeders the Niarchos family, the son of Deep Impact was encountering decent ground for the first time and bounded clear of three rivals in the style of a very good horse.

Connections were keen to stress both options remain open following a successful first attempt at in excess of a mile and a furlong.

"For me what he showed today confirmed what Stephane [Pasquier] and Pascal had already told us after his last piece of work, namely that acceleration which everyone looks for," said Niarchos racing manager Alan Cooper.

"Pascal told me over the phone recently that Study Of Man possesses a similar turn of foot to his grand-dam, Miesque, which gives us great encouragement.

"Stephane gave him a proper race because this is only his third start and, if we were going to go on to a major Group 1 next, he needed experience. I think he'll have learned from today.

"We came here to see about the trip and whether Monsieur Bary and the owners could discuss England as an option. He gives the impression he'll stay, though it would be different at Epsom, where there will be pace on from the start. All options are open."

Cooper said the perceived strength of opposition in the respective Classics would not play a role in where he goes, adding: "The horse is the most important thing and when you're lucky enough to have one like him, you have to manage him."

Bary was similarly impressed and said: "Study Of Man has a good temperament, a great turn of foot and he's just a very good horse. He moved much better on the ground.

"We'll decide between the Derby and Jockey Club in due course. But he's a young horse and we mustn’t go too fast with him."

The Greffulhe proved to be a springboard for Pour Moi ahead of his 2011 Derby triumph, while, a year later, Saonois graduated from a fourth place at Saint-Cloud to land the Prix du Jockey Club.

For the latest global racing news, go to racingpost.com/news/international

FIRST PUBLISHED 4:06PM, MAY 8 2018
Pascal told me over the phone recently that Study Of Man possesses a similar turn of foot to his grand-dam Miesque