Kew Gardens (left) beat Stradivarius by a nose in a thrilling finish to the Long Distance Cup
Alan Crowhurst
1 of 1
By David Milnes UPDATED 6:45PM, OCT 19 2019

Different track, different result was the outcome of the Long Distance Cup in which Kew Gardens brought the successful ten-race run of last year's winner Stradivarius to an end – but only just.

The marathon contest was the first of three races to be run on what is the jumps track but there were no winter-type winning margins as just a nose separated the front two at the line after a battle royal from the furlong pole.

Kew Gardens, on whom Donnacha O'Brien was standing in for the absent Ryan Moore, sat off the pace for much of the journey before striking for home early in the straight.

Frankie Dettori, who was untroubled in fifth for much of the journey on Stradivarius, followed last year's St Leger winner through before moving ahead inside the final furlong.

In the end, the ground, which was changed to soft from good to soft, soft in places after the race, proved the familiar chestnut's undoing and he floundered and allowed Kew Gardens to get back up.

A 7-2 chance, Kew Gardens was making up for lost time having had to miss the Gold Cup at the royal meeting in the summer due to injury. 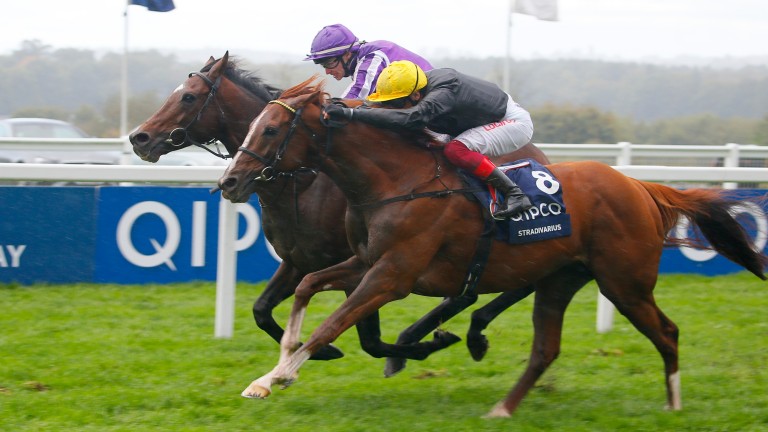 The winning jockey said: "I thought when Frankie came to me he was going to go past me but this fellow found another gear and battled hard. I felt he was the one horse in the race where you could not be sure that Stradivarius is better than him."

Aidan O'Brien, who was winning the Long Distance Cup for a third time, said: "We were training Kew Gardens for the Gold Cup here but he got injured and it all went pear-shaped. He barely made it back to run in the Irish St Leger and this was a step forward from that. The lads will decide if he stays in training but if he does we'll hopefully be back here next June."

As for Stradivarius, Dettori said: "It was much too soft for him. He couldn't use his turn of foot and the other horse outstayed him in the ground."

John Gosden said: "We were brave to run him but that's not his ground. I'll take nothing away from the winner, but he's a top of the ground horse and has run an absolute blinder. There's no disgrace in going down by a nose."

FIRST PUBLISHED 2:27PM, OCT 19 2019
He's an unbelievably brave horse but such a classy horse as well

Record turnout as visitors flock to Newmarket yards for Henry Cecil Open Weekend John and Thady Gosden: 'It's no different to managing a top footballer' 'You'd think I was mad' - Paddy Twomey eyeing top prize for Love conqueror Coco Doncaster in search of new sponsors for key races at St Leger meeting Would you be a backer of Stradivarius at 5-2 for the Long Distance Cup at Ascot? Record number of Newmarket yards to open on Henry Cecil Open Weekend