Racecourse Return BACK ON COURSE

'We've missed the atmosphere and our friends' - racegoers buzzing for return 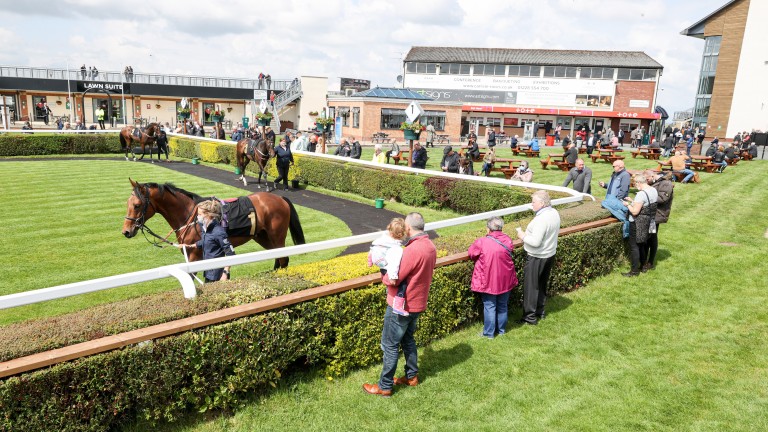 Glued to the action: racegoers get a glimpse of the runners in the paddock at Carlisle
John Grossick (racingpost.com/photos)
1 of 1
By James Burn UPDATED 2:45PM, MAY 17 2021

The long wait for racegoers to be back on track ended on Monday and it was little surprise those at Redcar were thrilled at the experience.

Redcar, along with Carlisle, welcomed spectators for the first time at a British meeting since the start of the year, the coronavirus pandemic meaning the sport has taken place behind closed doors since.

However, restrictions were eased by the government from Monday and racecourses in England can now welcome a maximum of 4,000 people. 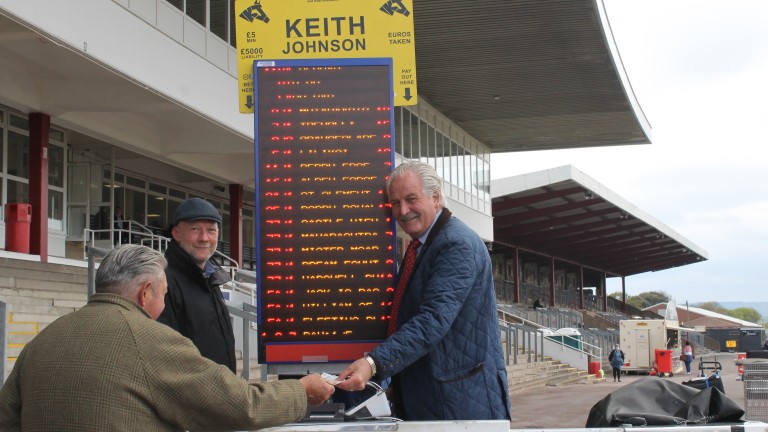 Layers and racegoers returned to Redcar on Monday
Chris Barron

Mark and Sandra Keelty, from Middlesbrough, were the first through Redcar's gates in advance of its eight-race Flat card.

"We've been club members here for a long time and it's just brilliant to be back after so long," said Mark Keelty, while Sarah added: "We've really missed the atmosphere and seeing friends, so we are just thrilled to be getting back to some kind of normality."

Nathan Richardson made the trip from Scarborough and said: "We go all over the country, enjoying racing, and we really like Redcar. It's such a friendly place and a really good track so it's brilliant to be back." 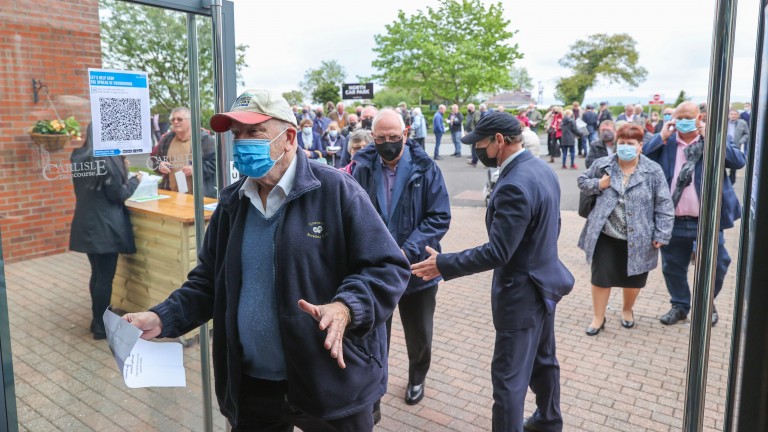 Racegoers make their way through the entrance at Carlisle on Monday
John Grossick (racingpost.com/photos)

He was accompanied by his brother Wayne, who came from York and said: "I think it's the camaraderie we've missed most – let's hope we have a few winners!"

There was an early start for West Yorkshire-based pals John Baxter and Chris Varley and the former said: "This was the nearest course to home and we just couldn't wait to get back racing."

Explaining the need for an alarm clock, Varley went on: "We set off at 7.15am, had our breakfast on the seafront, and now we just want to see some live racing – it's much better than watching it on the telly!" 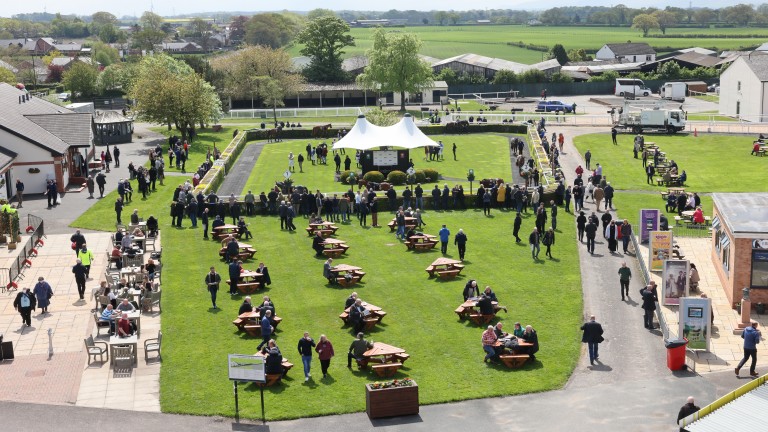 The scene near the paddock at Carlisle on Monday
John Grossick (racingpost.com/photos)

Like fans, on-course bookmakers returned and they included Richard Johnson, who father Keith started their family business in 1976.

He said: "I haven't slept for two nights because I've been that excited.

"It's absolutely brilliant to be back, knowing there's going to be some people here, and seeing some colleagues.

"It'll be a quiet start but Redcar's done a great job and it's a good place to get going again. Hopefully, everything goes smoothly, we manage to get a bit of business, and build from here." 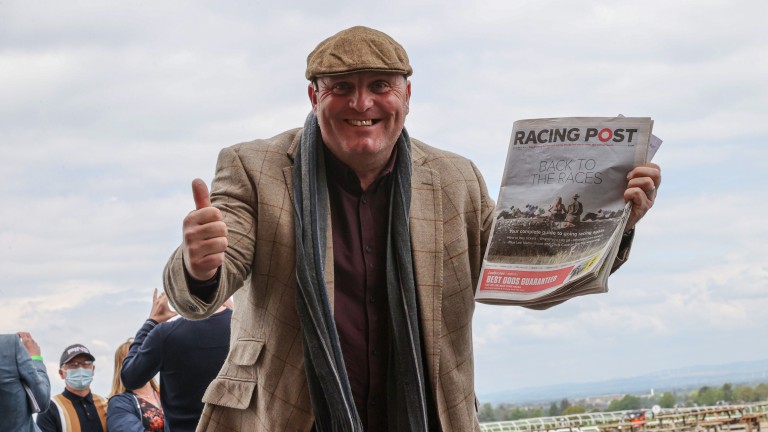 Racegoers are back on track, with Carlisle one of the first courses able to welcome crowds
John Grossick (racingpost.com/photos)

He said after the victory: "It takes a little bit of getting used to, it's different – the parade ring feels a hell of a lot smaller!

"But it's nice. You can see everybody is as enthusiastic as we are to get everyone back. I think racing has done a great job to keep us all safe and I hope they get their just rewards now with punters through the gates and we can look forward."

It was a similar story for racing at Carlisle, for which local Peter Dixon was well prepared.

"I had my haircut at 9am this morning to get ready for today," he said. "It's amazing to be back at a sporting event again. I've missed going to the races, football and rugby."

Those sentiments were not lost on Simon Dickson, who was aware of the restrictions in place, but anticipated an enjoyable afternoon, as long as his tips proved accurate. 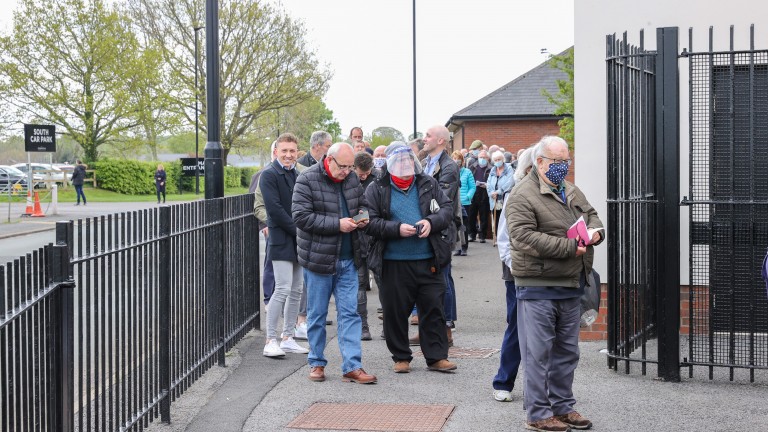 Crowds were queuing to get back to the races at Carlisle on Monday
John Grossick (racingpost.com/photos)

"I'm very excited to be back on the racecourse and get a few winners," he said. "There are rules to follow but it's great to have a drink and a bet and meet up with friends."

Craig Hamilton came from nearby Workington with his five-month-old baby boy.

"It's Mikey's first day at the races and hopefully he'll be a lucky charm," he explained. 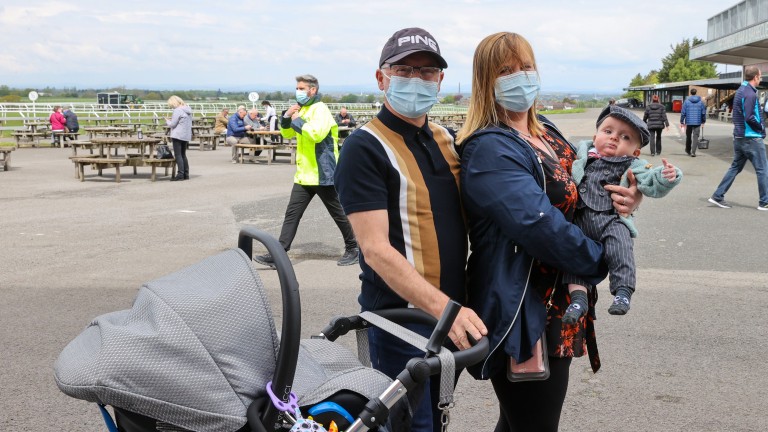 "It's also Louise's [Williams] surprise birthday present. I bought the tickets when they first came out and surprised her with them this morning. It's nice to have some normality again and get dressed up and do something. We normally go racing seven or eight times a year but haven't been for nearly two years and we've really missed it. We love horses and the atmosphere of a day at the races." 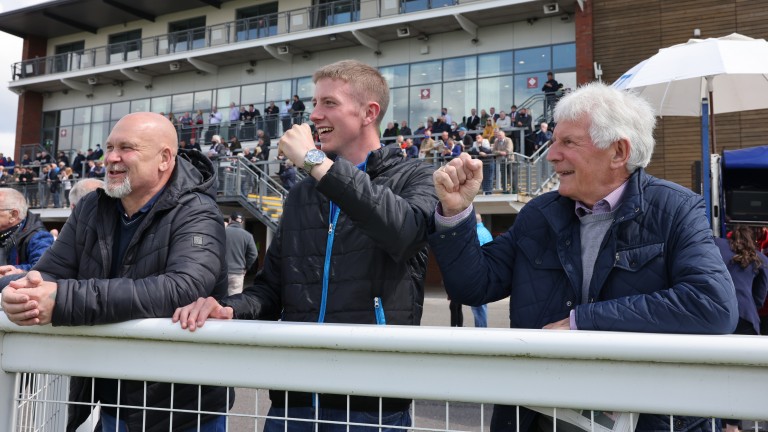 Punters celebrate a winner in the first race at Carlisle on Monday
John Grossick (racingpost.com/photos)

Windsor and Leicester are also due to race on Monday, hosting twilight meetings, and the latter's clerk of the course Jimmy Stevenson is thrilled at the prospect of crowds making their presence felt.

"I'm very happy to get the crowd back," he said. "It's like football, which is nothing without fans and it's the same with racing. It's great to have the public back and it was incredible to watch Leicester City in the FA Cup on Saturday with the fans.

"You don't realise that while the whole emphasis is on the game it's the fans that make it. It all disappears without supporters and I wouldn't want to see another season without fans at football or on a racecourse – it'd be horrendous."

Where can I go racing in England this week and how can I buy tickets?

"There are some showers form lunchtime onwards, but I'm hoping they're gone by the evening, although there is some rain around from mid-to-late afternoon," Stevenson added.

Limits on what betting shop customers can do also eased on Monday, when casinos were also allowed to reopen – a move Betting and Gaming Council chief executive Michael Dugher described as fantastic.

We are delighted to welcome spectators back to our racecourses across England from today!

Please remember to follow the new protocols in place
https://t.co/xmSSKxRBej

Any questions ahead of your return to a racecourse
https://t.co/QToya9vVtD pic.twitter.com/FrmFk3NG4A

"It's great news that most of the UK's casinos are finally able to reopen and is a testament to the hard work that staff have put in making them Covid-secure," he said.

"As well as providing excellent entertainment for their customers, casinos are a major contributor to the UK economy, something which will be vital in the months ahead as the government tries to repair the damage done to the nation's finances by Covid-19.

"I am also delighted that the restrictions imposed on betting shops are being lifted. Their safe reopening in April has been a huge success and this is further reward for the efforts they have made to ensure their premises are Covid-secure."

FIRST PUBLISHED 10:52AM, MAY 17 2021
It's amazing to be back at a sporting event again. I've missed going to the races, football and rugby