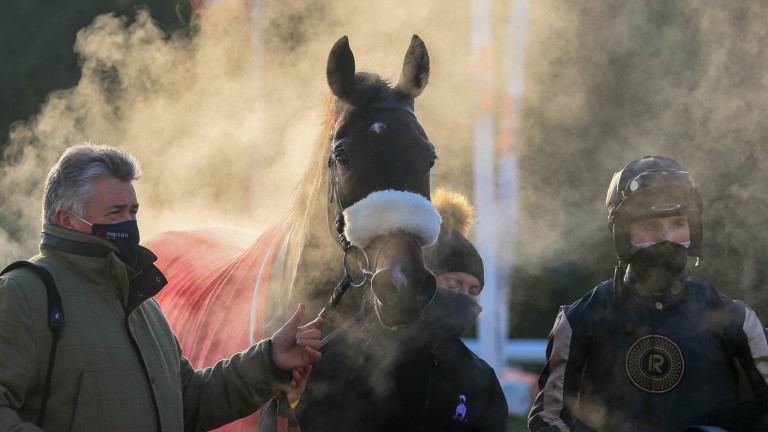 As has become his norm, Paul Nicholls marked his latest King George triumph by stopping off for an extremely happy meal at a McDonald's on the A303. He may have fancied doing the same on Saturday after enjoying a 10,419-1 seven-timer highlighted by a pair of Kempton Grade 2 wins and confirmation that one of his young stable stars could be a seriously big Mac.

A Kempton treble was supplemented by doubles at Chepstow and Wincanton, but star of the show was McFabulous, who already has the 11-time champion trainer eyeing up a return to Kempton for the Kauto Star Novices' Chase on Boxing Day.

Another candidate for that card is Master Tommytucker, now potentially bound for the King George after surviving the sort of final-fence blunder for which Kauto Star himself was famous. Not so lucky was Imperial Aura, who made an early exit from the Ladbrokes Silviniaco Conti Chase.

Success in that contest took Nicholls' haul for the afternoon to seven – just one shy of his personal best – but he had already been swimming in success and understandably jubilant after the Dornan Engineering Relkeel Hurdle, in which McFabulous came clear of On The Blind Side and Thomas Darby. 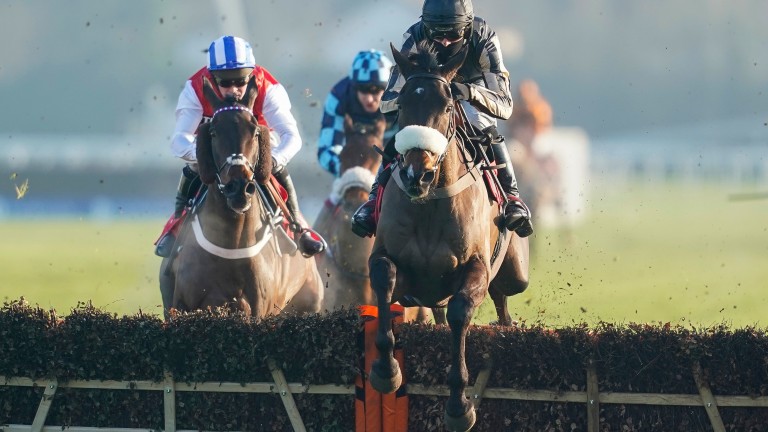 "We hadn't had a winner in 2021 – now we've had seven in one day," said Nicholls, currently minded to avoid the Cheltenham Festival with McFabulous and therefore a rematch with Thyme Hill and Paisley Park, who proved too strong over three miles at Newbury in November. Instead, the Grade 1 Aintree Hurdle on the opening day of the Grand National meeting is the preferred plan.

"He'll have an entry for the Stayers' Hurdle in case it falls apart but I would say we'll keep him fresh for Aintree," said Nicholls. "He wasn't beaten too far at Newbury but I'm not convinced I want to give him a hard race at Cheltenham and I can't see how we can beat Paisley Park and Thyme Hill.

"He is going to be a super chaser. I see him as one to come back here for the Kauto Star on Boxing Day. Three miles over fences at Kempton would be perfect."

It may also be perfect for Master Tommytucker, who like all his stable's weekend winners will on Monday beat most of the nation in the race to get a vaccination. In the case of the Team Ditcheat horses, the jabs will be to provide protection against flu – although it was the trainer and the horse's backers who almost needed medical support when a horse who has fallen twice at Kempton almost did so again at the final fence.

By then, Imperial Aura had long since unseated David Bass, leaving connections in a quandary over whether to target the Gold Cup or Ryanair Chase. As with McFabulous, Nicholls is leaning towards leaving Cheltenham alone and heading to Liverpool.

"I saw a better stride than you at the last!" Nicholls shouted in jest to Harry Cobden as he returned to the winner's enclosure. Rather more earnestly, Cobden reflected: "I was thinking 'you silly, silly boy' – he did bloody well to stand up there." 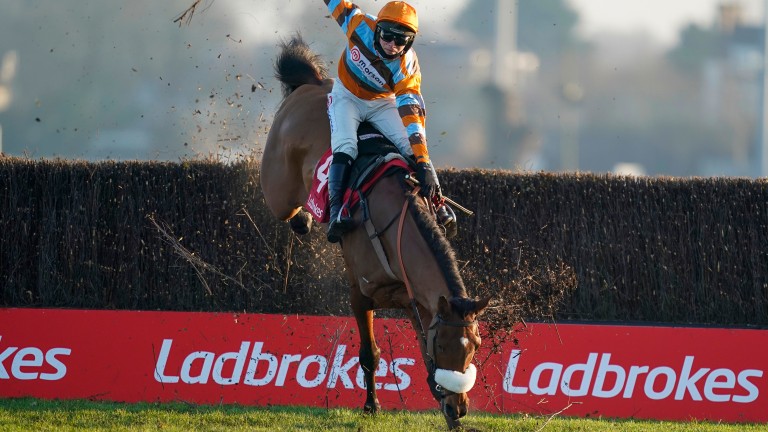 Relieved that he did, Nicholls said: "How many times do you see a horse do that at the last here? Kauto used to do it and so do a lot of other horses. The good thing is he jumped great on the whole and he's got a huge engine.

"He's obviously a talented horse but he has been a challenge from the start. He is definitely better on a track like this and a small field suits him, too. He's in the Gold Cup and the Ryanair, and I'm sure the owners will be dreaming of running in one of those races, but for me he would be awesome over two and a half miles around Aintree.

"I know he is ten but he's lightly raced and I could definitely see him lining up in next season's King George."

Imperial Aura's trainer, however, is thinking of more immediate missions.

"David Bass said there was a great big shadow in front of the fence, that’s his excuse," said trainer Kim Bailey. "I would imagine he'll now go straight to Cheltenham – but for what race is rather difficult to work out."

For Bailey, it was a frustrating afternoon, one when even his lucky suit proved unhelpful. Someone else headed back to Somerset with no reasons to be disappointed.

"These are exciting times," said Nicholls, who would normally now be enjoying a two-week holiday in Barbados. Instead, he had to make do with winning Kempton's long-distance novice hurdle with Barbados Buck's.

"It would have been impossible this year and just not worth it," he explained. "With everything that's going on right now I would have been mortified to be out there if a problem emerged at home."

FIRST PUBLISHED 1:44PM, JAN 9 2021
He is going to be a super chaser. I see him as one to come back here for the Kauto Star on Boxing Day