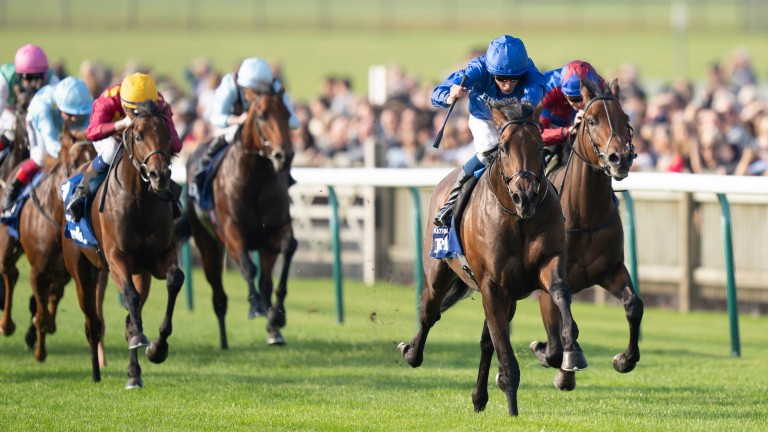 A standout before the Dewhurst Stakes and a standout after it, Native Trail heads into winter hibernation at the head of the Qipco 2,000 Guineas market after doubling his Group 1 tally to two and extending his unbeaten record to four with a clinical display under William Buick.

Trainer Charlie Appleby has on numerous occasions described the son of Oasis Dream as a "man among boys" and he was impossible to miss as he towered above his peers in the pre-race parade.

It was harder to spot him during the race as he was smuggled away in midfield early on but once Buick manoeuvred him off the rail and into daylight he stamped his class all over his seven rivals, quickening clear for a two-length success over the positively ridden Dubawi Legend, with Champagne Stakes scorer Bayside Boy a further half a length away in third.

"It was one of those occasions that as they were walking around the paddock I was gaining more confidence," said Appleby. "I just thought he was the standout and I think we've got a fantastic horse on our hands for next year's Guineas.

"He's 540 kilos and came in at that weight from the breeze-ups. He warms into the race and does it all the right way round. We saw that again today and I was confident that once William gave him the office he would pick up well.

"Once he met the rising ground the one thing this horse wasn't going to do was stop galloping. It was very similar to his win in the National Stakes and his acceleration, when he's really given the office, is quite remarkable." 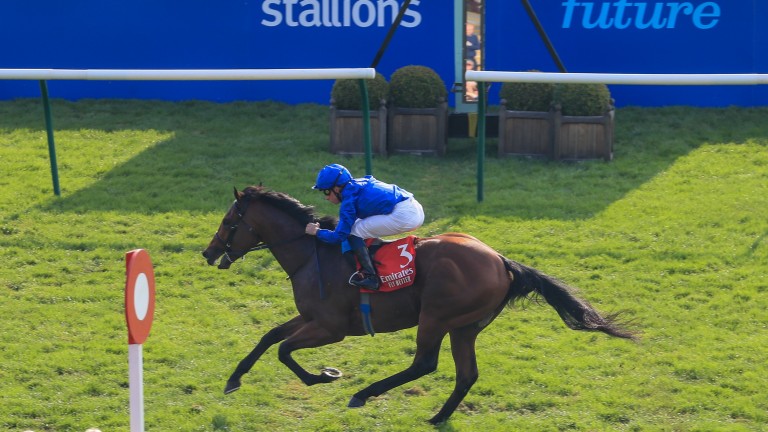 On a red-letter day for Appleby, Buick and Godolphin, the Newmarket trainer grabbed hold of the Guineas market with both hands and Native Trail's stablemate Coroebus put his own name forward for Classic honours with a tearaway win in the Autumn Stakes.

Appleby and Buick were inevitably asked to compare the two but they were not exactly on the same page.

"Between myself and William I think we probably slightly differ," said Appleby. "I do like Coroebus. He's a supreme traveller and in the Classics the one thing you've got to be able to do is travel and that's what Coroebus does in abundance.

"It doesn't matter how quick they go, they'll never take him off the bridle before the two-pole. That's my opinion but I'm just delighted to have these two horses for myself and all the team, and we look forward to next season."

Bookmakers favour Native Trail at a general 3-1 favourite, with Coroebus next best at 5-1. Neither will run again this year and the 2,000 Guineas is very much the spring target for both next season.

"We're in a very fortunate position to be going into the winter with two fantastic colts," added Appleby, who leapfrogged Andrew Balding at the top of the British Flat trainers' championship. "We'll try to keep them apart early in the spring but let's see how they develop over the winter.

"I've never put them anywhere near each other at home. Native Trail is a harder horse to assess. Coroebus travels for fun, but this horse does it in a different manner. I can't see him [Native Trail] going further than a mile."

Buick, who had a day to remember with three winners, was going with substance over style as he put Native Trail top of the juvenile pecking order at Moulton Paddocks.

"It's very hard to split them," said the winning rider. "One is a dual Group 1 winner, so at this stage he's ahead, but we'll see next year. Native Trail goes for pressure, while Coroebus travels very strongly and goes through the gears very quickly."

He added: "It was messy and we ended up over on the stands' rail for some reason. I gave myself options the whole way through and I knew, once he hit the rising ground, he was going to change gear, which he did. He's a big horse and is all there. With a winter on his back he's just going to get better."

While Native Trail and Coroebus will not be seen on a racecourse again this year, both Dubawi Legend and Bayside Boy will be considered for the Breeders' Cup at Del Mar at the start of next month, according to connections.

FIRST PUBLISHED 3:10PM, OCT 9 2021
I just thought he was the standout and I think we've got a fantastic horse on our hands for next year's Guineas