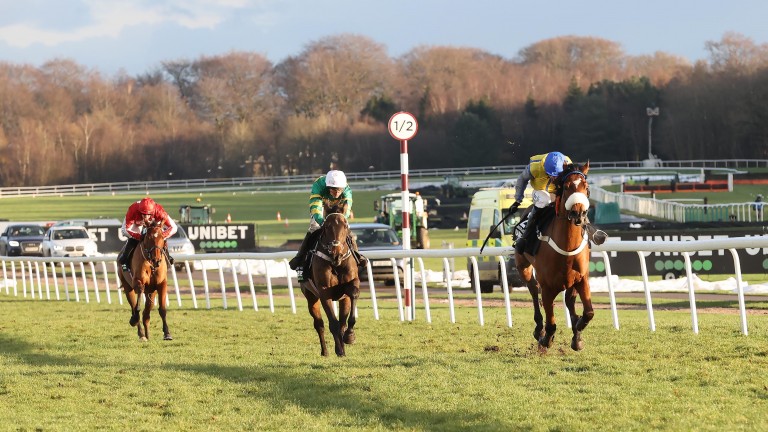 They shall not pass: Navajo Pass wins the Grade 2 The New One Unibet Hurdle from the front with Buveur D'Air (centre) unable to get by
John Grossick (racingpost.com/photos)
1 of 1
By Andrew Dietz UPDATED 5:59PM, JAN 23 2021

Nicky Henderson had no regrets about running Buveur D'Air on extreme ground at Haydock after the dual Champion Hurdle winner was denied on his long-awaited comeback by gutsy frontrunner Navajo Pass.

The conditions of the Grade 2 The New One Unibet Hurdle appeared ideal for Buveur D'Air as he was getting weight from his two inferior-rated rivals Navajo Pass and Ballyandy.

Watch: Buveur D'Air is denied by Navajo Pass on his return to action

However, the combination of very testing ground and the strong gallop set by the 4-1 winner, who was ridden aggressively from the front by jockey Sean Quinlan, proved too much for 8-11 favourite Buveur D'Air on his first start since picking up a freak hoof injury in the Fighting Fifth in November 2019.

"I'm disappointed he didn't win, but he still ran a solid race," said Henderson. "The winner set a really good gallop and I think they were going as fast as they could behind him. I think Nico [de Boinville] thought he had the winner covered going to the last, but then he took a big blow.

"The ground is not for him, but he's done well. His jumping was as good as ever and he's so slick and quick, and he's jumped every hurdle. I would expect him to come on hugely and we'll definitely go straight to the Champion Hurdle.

"He has a run under his belt and he'll come on tons for that. It gives us more time to play with between now and March so we'll stick to the plan." 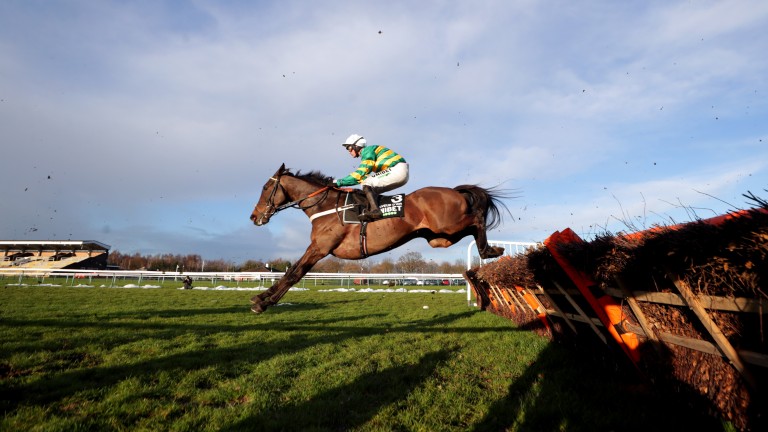 Buveur D'Air jumped and travelled well, but he was unable to make a successful return to action
Pool

Betfair Sportsbook and Paddy Power reacted to the performance by pushing out Buveur D'Air's Champion Hurdle price to 20-1 (from 10-1), while bet365 offer a standout 22-1.

Donald McCain expressed his delight with the progressive Navajo Pass, who won a handicap at Musselburgh under top weight on his previous start, but said the winner was unlikely to go for the Champion Hurdle.

"He's going to be a really smart horse," said the in-form trainer. "This is a season you can get lost a bit because it's his first season out of juvenile company and it's tough. We've been going to handicaps with huge weights and today he's taking on horses twice his age.

"Obviously, you're counting on Buveur D'Air needing his run. We're not daft enough to think this wasn't our day and not the most important day for them.

"I'm just thrilled. I don't see him as a Champion Hurdle horse, I don't think he has the natural speed. First thoughts are he'll probably be more suited to Aintree and I know Tim [Leslie, owner] loves Aintree, as do we."

It was a frustrating trip to Haydock for Henderson as he went home empty-handed despite having three favourites on the card.

The promising Allart (10-11) fell in the opening 2m4f novice chase, while Hijack (100-30) finished only eighth of nine in the 3m½f handicap hurdle.

Read more on the Saturday action . . .

Expert jury: our experts on whether Royale Pagaille should go for the Festival Novices' Chase or Gold Cup

FIRST PUBLISHED 3:41PM, JAN 23 2021
It gives us more time to play with between now and March, so we’ll stick to the plan