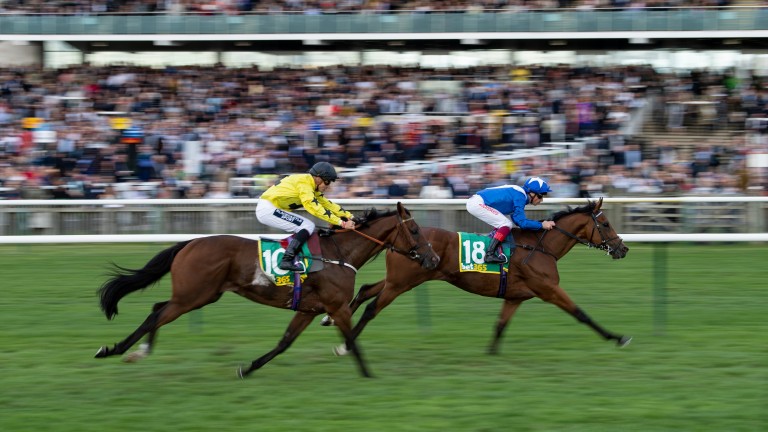 British racing received a boost on Tuesday as next week's three-day spectator pilot at Newmarket received the green light.

The racecourse's safety advisory group successfully convinced local authorities that appropriate measures were in place for the 1,000 racegoers-a-day experiment to go ahead.

After the test event at Goodwood was lost at the 11th hour and crowds at Doncaster's St Leger meeting were scrapped after only a day, Newmarket officials were fearful their pilot event for the Cambridgeshire meeting (September 24-26) could also be lost.

But behind-the-scenes talks have eased concerns and the racecourse can now plan for the event to take place with stringent health and safety measures at the venue. 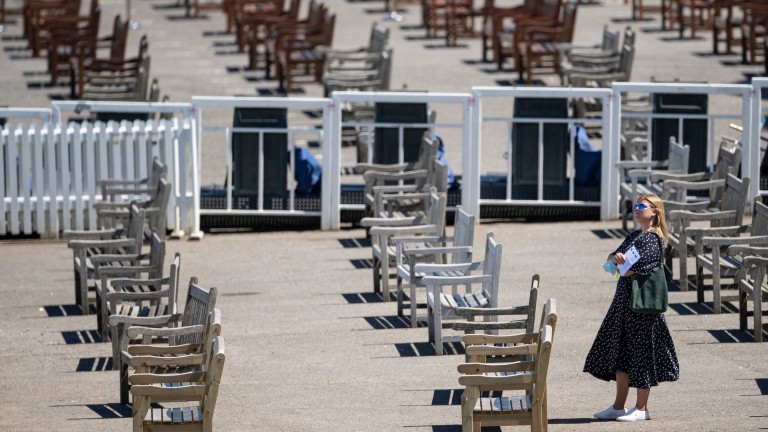 Crowds were not allowed at Glorious Goodwood earlier this year
Edward Whitaker (racingpost.com/photos)

Amy Starkey, regional director of the East region for Jockey Club Racecourses, said: "We’re pleased to be working closely with local authorities to stage a limited spectator trial at the Rowley Mile over the course of the Cambridgeshire meeting.

"The racecourse is a vast, predominantly outdoor environment that could safely space out several thousand people, not just the maximum 1,000 who will be in attendance with stringent health and safety measures in place.

"The Newmarket trial will provide important insights we can share across our industry and with other sports, so that when it is possible to welcome some level of spectators back to events more regularly in the future we are well equipped to do so."

New government rules limiting social interactions to six people came into force on Monday, and as part of a raft of measures introduced the capacity for each day was slashed to 1,000 from 5,000 last week.

There had been increasing uncertainty over the pilot events taking place since the director of public health for Doncaster ruled out spectators visiting the final three days of the St Leger meeting last week due to a rise in the local rate of Covid-19 infections.

The return of racegoers at Doncaster's St Leger meeting lasted only one day
Edward Whitaker (racingpost.com/photos)

The news that Newmarket's trial could still go ahead will be welcome news for all racecourses – several of which have painted a grim picture in recent days.

On Sunday Chester raised the possibility of "mothballing" the track for 2021 if crowds were unable to return, while Scottish tracks withdrew from the bidding process north of the border – citing an unwillingness to take on the liabilities should the meeting be cancelled at the last minute.

Warwick is also due to stage a smaller spectator trial on September 21, limited to 800 racegoers, and the Racing Post understands constructive discussions continue with local stakeholders ahead of a further statement being made. The Warwick trial's viability hinges on similar talks between the track and local authorities and Public Health England.

Newmarket has already refunded ticket holders who were due to be the course’s first paying spectators of the year, with any slots available being offered to the track’s annual members and sponsors.

Sporting venues have been working towards a limited return for crowds on October 1, as set out by the Department for Digital, Culture, Media and Sport, with culture secretary Oliver Dowden stating last week that he is "keeping under review" plans to ease restrictions at the start of next month, but that "we continue to plan for the best".

FIRST PUBLISHED 7:20PM, SEP 15 2020
The racecourse is a vast, predominantly outdoor environment that could safely space out several thousand people, not just the maximum 1,000

Racing must 'do the right thing' in fight against Covid says BHA's Jerry Hill Levy Board has 'enough to fund racing for first quarter of 2021' 'He's a star': Sean Levey expecting fireworks from top juvenile in Middle Park Bill Barber: strong US arm key reason why Hills have attracted two big suitors Fabulous Newmarket card should bring smiles to our faces in difficult times Isabella Giles tees up 1,000 Guineas bid with Rockfel win