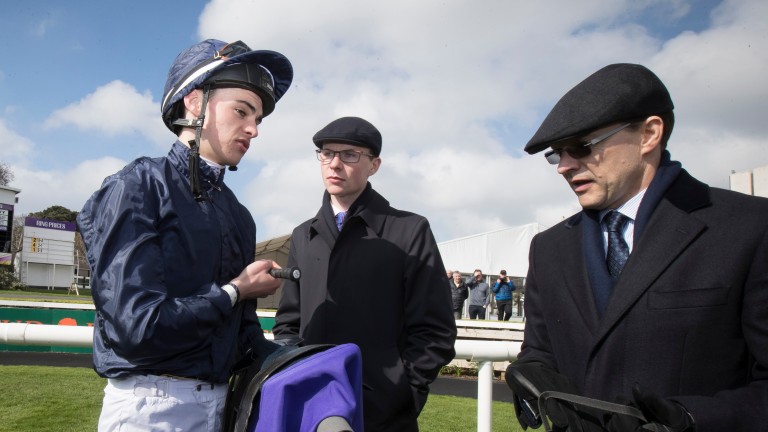 Sunday's Prix de l'Arc de Triomphe card at Longchamp will be hit with a spate of high-profile withdrawals after Aidan O'Brien revealed that all of his and his sons Joseph and Donnacha's runners would be withdrawn from all meetings after urine samples that were sent to a French lab returned positive for the prohibited substance Zilpaterol.

The sensational move comes after it emerged on Friday night that Gain Equine Nutrition had advised its customers to stop using their feed products after batches had become contaminated with Zilpaterol, which is unlicensed in Europe but is used in the US and elsewhere to promote weight gain, mainly in cattle.

Initial urine samples that O'Brien sent to the Irish Equine Centre had returned negative, but the samples sent to the French lab returned positive.

As a result of the positive findings, it means that all of the O'Brien runners, including Mogul, Japan, Sovereign and Serpentine, who were due to take on Enable in an historic Arc, will not take part.

"The results from the urine samples we sent to the Irish Equine Centre were clear but they returned positive from the French lab," O'Brien told the Racing Post on Saturday night.

"The Irish Equine Centre can seemingly test only as low as one part in a billion, and I believe the test that they were doing is only for cattle because that is the only one that can be done here. All of the tests we sent to France for the French runners returned positive.

"There is a chance that we could have been okay to run, but we couldn't be sure. To protect the integrity of the whole thing, we have to take them out.

"We are hoping we will have them ready to run during the week again but we are just taking it day by day. Obviously it is a big disappointment for everybody, for Joseph and Donnacha as well."

Roger Varian, who also feeds Gain products, had withdrawn his seven intended runners from British meetings on Saturday. In all, the O'Brien family have 11 declared to run at Longchamp, with Donnacha's Fancy Blue having been a leading contender for the Prix de l'Opera.

They have six declared to run at Tipperary, all of whom will also be withdrawn. The focus will also now likely intensify on any recent O'Brien winners, with Carlisle Bay landing a maiden for Ballydoyle at Tipperary on Saturday.

O'Brien had on Friday indicated that none of his recent runners in France, or anywhere else, had returned positive tests, while the Irish Horseracing Regulatory Board's chief veterinary officer Dr Lynn Hillyer told the Racing Post on Friday that the authority does test for Zilpaterol.

Hillyer said there have been "no indications in terms of screenings or findings" in relation to the substance. "We are monitoring it closely in partnership with France Galop and the BHA in particular but also working with racing regulatory authorities in countries which may have been affected," she added.

The O'Briens' decision could also yet lead to further withdrawals at Sunday's various meetings, as Gain products are among the most widely used in Ireland and Britain. John Gosden is believed not to feed Gain so the debacle doesn't impact Enable directly.

However, what sort of shape the prestigious Longchamp card will now take, on such a momentous day for the sport, is unclear at this stage.

Read more about the Arc

Gosden: there is a 'strong likelihood' Enable will be beaten due to the ground

FIRST PUBLISHED 10:01PM, OCT 3 2020
The Irish Equine Centre can seemingly test only as low as one part in a billion, and I believe the test that they were doing is only for cattle

Scottish-born jockey stuns British and Irish raiders in Bahrain International Ghaiyyath gets Cartier coronation after being crowned Horse of the Year Bahrain International Trophy: Gosden bidding to go one better with Global Giant Racing Post writers to the fore as nominations revealed for annual Derby awards The global go-to man: how Pierre-Charles Boudot exploded on to world stage One key runner from each of the six races on ITV this Sunday