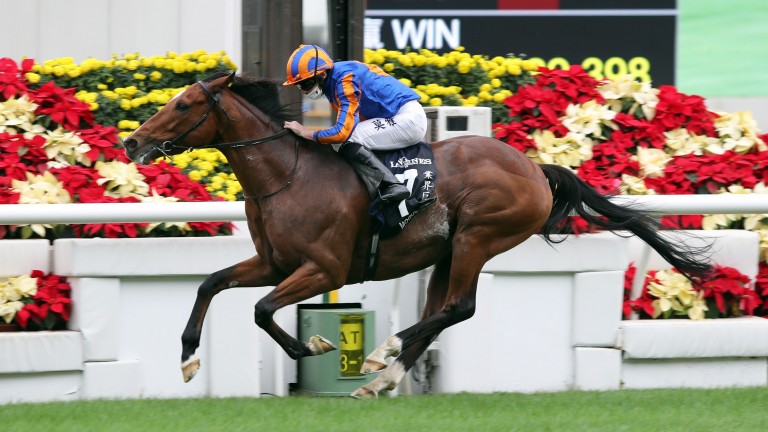 Aidan O'Brien on Mogul: "He has a great mind but we're not under any illusions about how competitive this race is"
The Hong Kong Jockey Club
1 of 1
By Brian Sheerin UPDATED 5:51PM, DEC 13 2020

Aidan O'Brien believes the best has yet to come with Mogul and described 2021 as being the year where Sunday’s Longines Hong Vase winner blossoms.

A Group 1 winner in Europe last season when landing the Grand Prix de Paris at Longchamp, Mogul has always been a horse O’Brien has spoken fondly of, and the master of Ballydoyle is predicting big things from the colt next year.

“I think next year could be his year," O'Brien said. "He looks like a very exciting horse for next year. All of those middle distance races - everything from a mile and a quarter to a mile and a half will come under consideration for him.

"He will get a little break now but he's a very exciting horse to have. He can travel and he handles fast ground. We're very excited by him.”

The three-year-old travelled strongly from a prominent position before showing an electric turn of foot in the straight to swoop past locally-trained favourite Exultant and stay on for a three-length victory in the Vase.

Mogul was trimmed into as short 12-1 for next October's Prix de l'Arc de Triomphe, a race he and stablemates Serpentine, Japan and Sovereign were ruled out of on the eve of this year due to the contaminated feed controversy.

A greater understanding of Mogul’s tactical strongpoints and the fact the colt is still improving makes O’Brien sure the dual Group 1 winner can scale even greater heights in 2021.

O’Brien describes the ride Pierre-Charles Boudot gave Mogul when coming from the rear to win the Grand Prix de Paris as something of a catalyst.

It is Mogul’s change of gear, according to O’Brien, that will work in his favour in all of the top middle-distance races next season.

The trainer explained: “Mogul is a horse who is made like a miler or even a sprinter, but he's a horse who we always thought would stay well - it's only when we started riding him for speed that we have seen the best of him.”

O’Brien added: “He is able to quicken up and change gears and he obviously stays well as well. It's really only when we started riding him for speed that we have seen what this horse is capable of.

“The first time we rode him for speed was at Longchamp and it was just a big help for him. He's one of these horses who can relax and quicken.

“The change of tactics has been the making of him but he's also still developing and is getting stronger. From the time that he was bought, he was always a big strong and powerful colt. We are very excited by him.”

Asked about the comparison, O’Brien said: “Physically he is bigger and stronger than Dylan Thomas. Dylan Thomas was made like a middle distance horse but this lad is made like a sprinter or a miler. This is a bigger, stronger, rounder type of horse.”

Moore was partnering Mogul to victory for the first time since the pair snared the Group 3 Gordon Stakes at Goodwood in the summer, and said: "He got there very comfortably and he just lacks a bit of maturity still. I wouldn't have wanted to be in front when I was but he was going and I had to commit. He was just waiting when he was in front, having a good look and taking it all in.

"He's a beautiful-looking horse and he reminds me of Dylan Thomas. I never rode him but he's a similar type of horse with lots of ability and a good mind."

Sunday’s success makes Aidan O’Brien the leading trainer in the Hong Kong Vase with three wins in total, the previous two thanks to Highland Reel’s efforts in 2015 and 2017.

Moore's went on to complete a double on Danon Smash in the Hong Kong Sprint, which made him the most successful ever international-based rider at the Hong Kong International Races with seven victories.

“We got lucky," reflected Moore after Danon Smash overcame stall 14 to emulate his sire Lord Kanaloa with victory for Takayuki Yasuda.

"He stepped very well and we managed to slot into a lovely spot. I was always happy and when the pace steadied around the bend, I was able to just move out and keep moving forward and he got there in plenty of time."

The five-year-old put on a dazzling display, racing from off the pace and showing a devastating turn of foot to power clear by two lengths.

“I can have a good sleep tonight,” Lui said. “I’m very happy – at the moment, I don’t know what to say, my heart is still pumping. As a jockey, as a trainer, as an owner, you’re dreaming of this.

“I was worried about the horses from Japan and Ireland but now, after this race, he has shown me that he’s a champion.”

FIRST PUBLISHED 7:43AM, DEC 13 2020
From the time that he was bought, he was always a big strong and powerful colt. We are very excited by him

Beckett plan ends in Victory as Moore insists bad luck was not down to the track Classic pictures look reassuringly familiar after fascinating trials Please run him, Aidan. Don't remind me why I gave up ante-post betting Nugget gives owners a golden moment in Spring Cup as he enters Royal Ascot mix From 33-1 to 7-4: Santa Barbara is a strange but fascinating Guineas gamble Lancaster House is the master as O'Brien and Moore dominate with four-timer