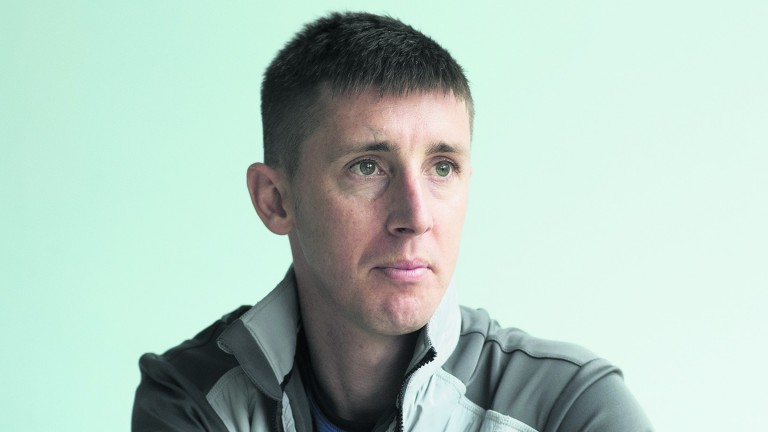 Before becoming a jockey George Baker had a long-standing job offer from BT to go to work for them. As a telegraph pole.

Flat jockeys simply aren't 5ft 11in "and a bit", as he puts it. It defies sense and logic and the same could be said of Baker's inspirational recovery from his hideous fall when racing on the ice at St Moritz in February.

It has not been a miracle, there has been nothing inexplicable about it. Aside from superlative medical attention and huge support from across Flat racing, Baker's reinvention of himself has been a triumph of will. People talk of "indomitable spirit" and Baker has that rare quality in spades.

But, as Arnhem taught us, there is such a thing as a bridge too far and Baker's hopes of returning to the saddle have proved just that.

Usually a jockey's forced retirement is a moment for regret that has few redeeming features. But Baker's bowing to the inevitable has strong elements of triumph to it. Here we have the self-made man who has made himself again.

He says: "I have kind of known for some time that I wouldn't race-ride again and the confirmation came a couple of weeks ago. Another bang on the head wouldn't be good and in all honesty I think I would have struggled to pass the medical."

Sitting across the table from Baker you would not think he has a bother on him. He is playing golf and has taken up tennis – far too old to start at 35 – and mentally he is spot on.

For five weeks after the accident he had post-traumatic amnesia, which meant he talked a lot of repetitive nonsense and had a head full of daft ideas.

He became obsessed with riding Roger Charlton's Quest For More at Meydan and remembers: "It didn't matter how many people reminded me I couldn't walk and was in a wheelchair, all I wanted to do was go to Dubai. One night I even managed to get through to Roger and talked to him for about an hour – God knows what I said to him but he listened very patiently.

"Mind you, a long time ago I must have rung him for five years trying to work for him and eventually he gave in. Beckhampton is an amazing place, I worked my way up there and it was the first time I was regularly riding good beasts. I loved it and when you ride work up that trial ground it doesn't lie to you."

But Baker's injuries – mental and physical – did not lie either. He became fixated on the idea that the accident was his fault and all the time he was fighting arduous battles to haul his body back to something like normality.

He lost movement in one side of his body and had to learn to walk again – teaching himself to walk backwards as part of therapy proved close to impossible.

He says: "In hospital they had to watch me all the time as I was always trying to stand up.

"And when I got home there was this big whiteboard upstairs which read 'Do Not Go Down Stairs on your Own'. I had to slide down on my bum for ages.

"It was all about remaining positive. I didn't want there to ever be a stage when I looked back and thought I hadn't given it my all." 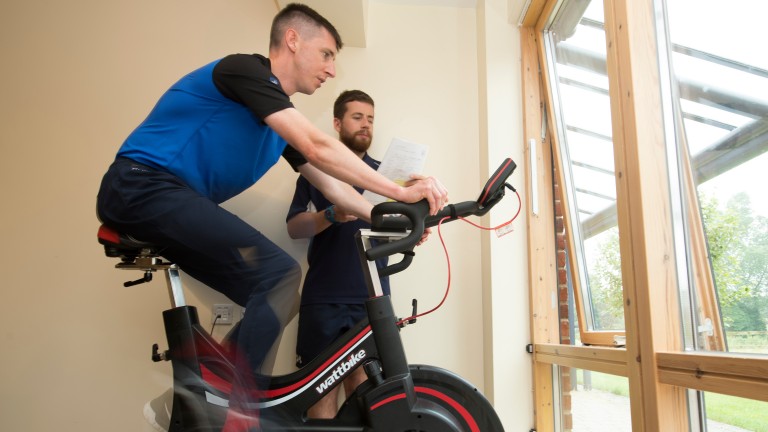 Baker with physiotherapist Rob Treviss at Oaksey House during his rehabilitation
Edward Whitaker
Throughout his career Baker faced day-to-day battles that have earned the admiration of many, not least his old ally Gary Moore, who says: "He's an amazing guy who knows the time of day and is one of the best blokes in the game.

"His discipline in keeping his body in line to ride on the Flat has been extraordinary. One day when he was here someone brought in some cupcakes and he was offered one. He tore off a tiny scrap of rice paper and said 'that'll do me'. But you never heard him whinge or moan to anyone and watching him win the Leger was one of the greatest things I've seen.

"He deserved it and a whole lot more. He's mad keen to stay in the industry and I hope someone wakes up to what an asset he is. He would be great on TV and his knowledge would make him a terrific racing manager." 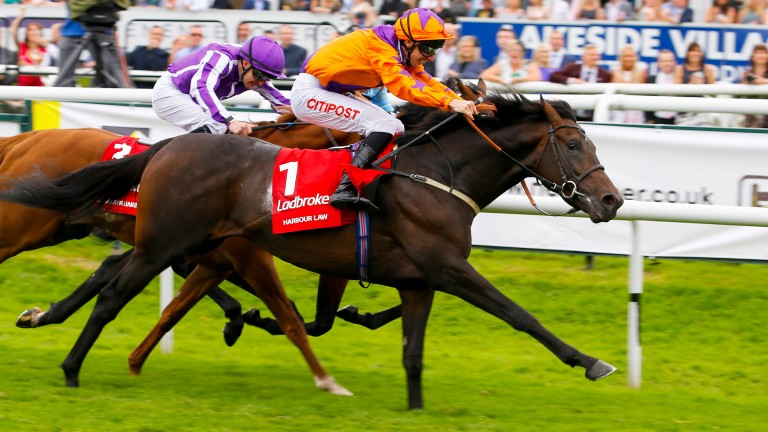 Baker lands the 2016 St Leger on Harbour Law (near side) from Ventura Storm
A host of helping hands – the Injured Jockeys Fund, Oaksey House, doctors, family, friends – have supported Baker but weighing-room humour is never far away. He laughs: "Dominic Elsworth calls me Thunderbird because he says I walk like one!

"In recent months I've watched a lot of jump racing. You think I got a bash on the head? Well, it was nothing compared with them as they must be mad, mustn't they?"

George and wife Nicola made a decision never to dwell on the past and to concentrate on the future. He says: "I've been working at my hobby since I left school. Racing is the thing I know and I'm determined to stay in it. I'm the most positive man alive and I'm looking at doing some jockey coaching while finding a job – I would enjoy that and could go on doing it when I'm working again.

"The support we've had has been humbling. Alice Plunkett, whose husband William [Fox-Pitt] recovered from a bad head injury, has been a massive help to Nicola and soon convinced her there was nothing at all unusual about seeing her husband in a nappy.

"Alice convinced me to write a diary every day, which has helped in all sorts of ways. I really do believe that I've been incredibly fortunate."

And racing has been absurdly fortunate to have this talented, straightforward and elongated figure in its midst. Find someone who does not like Baker and you have found someone who is clueless as to what a good man is like.

Our sport cannot afford to lose someone of his probity, mickey-taking humour and vast knowledge.

In the meantime another opportunity has popped up. It is, as yet, little known but Nelson's Column is crumbling badly and is going to be carefully dismantled before being restored and rebuilt.

So they are going to stand George Baker in the middle of Trafalgar Square instead – one hero filling in for another.

'He has this incredible willpower'

Nicola Baker flew out to Switzerland two hours after her husband's accident at St Moritz and the last she heard boarding the plane was that George was in an induced coma and on a ventilator.

She says: "When I first saw him he was vaguely conscious but it still brought you up short. He had scrapes on his face and was wired up to any number of machines. There were four others in intensive care and they don't call it 'intensive' for nothing. 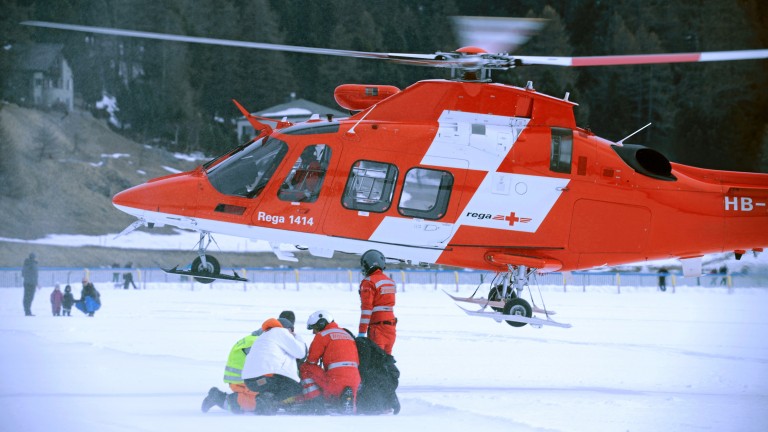 The beginning of the nightmare: Baker is airlifted to hospital after his fall at St Moritz
Andy Mettler
"In the early days he did a lot of strange things – when he ate he would mix everything up on the same plate. I never did think steak, yoghurt and mashed potato would catch on.

"For weeks he was talking a lot of nonsense and would repeat what he said all the time. But he has this incredible willpower – stubborn really – and he would never give up trying.

"There were times when I thought he would never get anywhere near the place he has reached. We've been so lucky. He's playing golf and tennis, his long-term memory is perfect and he can lead a normal life with just some fractional restrictions.

"Our relationship never needed any strengthening but the whole ordeal has made us even closer. I never used to see him as he was a very busy jockey, off early and home late.

"But now we have proper family time and we can be with Bella, who was one year old two weeks ago. And having him at home hasn't driven me round the bend. Well, not yet anyway!"

FIRST PUBLISHED 6:02PM, NOV 3 2017
Another bang on the head wouldn't be good and in all honesty I think I'd have struggled to pass the medical